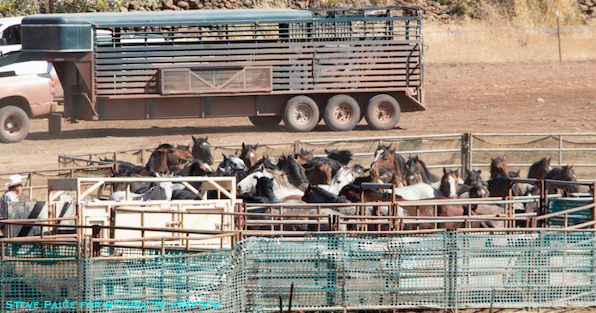 Studs were held in a dangerously cramped holding pen for an extended time during a 2016 helicopter roundup at Devils Garden Wild Horse Territory. Return to Freedom was able to use photos like this one to persuade the Forest Service to move the horses out of the pen. RTF file photo by Steve Paige.

Stallions that were captured, freeze-branded and released as part of a 2016 roundup “challenged gather personnel at the trap site,” according to the Forest Service. No injuries were reported.

Ten wild horses have died during the monthlong roundup. The Forest Service has provided little detail, except that five other horses have been put down for what it says were preexisting conditions, one foal “died in holding,” and an adult wild horse also died as a result of an injury suffered in the holding corrals.

In addition, one foal has been born in the holding corrals.

Return to Freedom last week joined a coalition of national and local advocates that filed a lawsuit to stop a planned unrestricted sale of wild horses from Devils Garden, which would place hundreds on animals in jeopardy of being sold to slaughter.

The agency’s plans have drawn opposition from wild horse and animal welfare advocates, including Return to Freedom, and demands from Sen. Dianne Feinstein, D-Calif., to explain how the Forest Service intends to keep captured wild horses from going to slaughter against the wishes of Congress and the public.

The remaining 700 or so younger horses, ages 9-younger, will be transported to Bureau of Land Management holding corrals in Susanville, Calif., where they will be offered for adoption over the next year.

Speaking before the National Wild Horse and Burro Advisory Board last week, a Forest Service official said that the agency had not made arrangements for the younger horses to be moved to a long-term BLM pasture after the year ends, meaning that they too could be vulnerable to sale to kill buyers.

The Forest Service says it is conducting the roundup “to help address impacts on aquatic resources, wildlife, grazing and traditional cultural practices.”

“Reducing the population will allow range and riparian ecological conditions to recover, while also supporting wild horse herd health by reducing competition for limited food, water and habitat,” the Forest Service wrote in a press release.

By comparison, the Forest Service permits 26,880 Animal Unit Months of private grazing on the wild horse territory. One Animal Unit Month is defined as a month’s forage for one horse, one cow / calf pair or five sheep.

Actual livestock use varied between 63-73% of the permitted maximum from 2006-12, according to Forest Service planning documents.

Return to Freedom is already making preparations for the rescue of the older horses. Should the U.S. Forest Service go forward with their disastrous plan to lift all restrictions on sales of an estimated 300 wild horses ages 10-older from Devils Garden Wild Horse Territory, this puts them in jeopardy of being purchased by kill buyers.

To donate to Return to Freedom’s Wild Horse Defense Fund for the Devils Garden response effort: