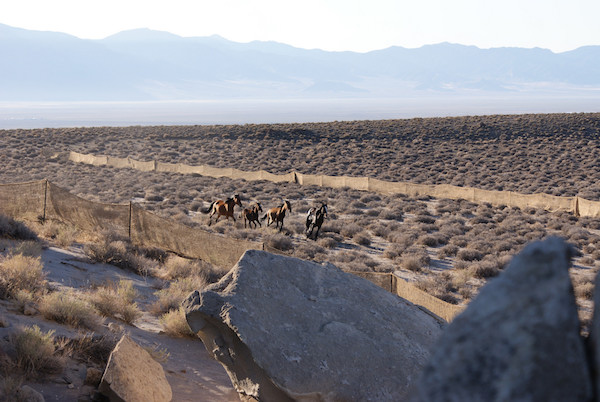 The Bureau of Land Management captured 99 wild horses Friday-Sunday, the final days of a helicopter roundup on the Pancake Complex of Herd Management Areas, about 30 miles west of Ely, Nev. Sunday marked the 35th and final day of roundup operations.

Two wild horses were killed during the three-day span, both on Sunday: an 8-year-old sorrel stallion suffered a broken neck and a bay stallion estimated to be more than 20 years old was put down “due to pre-existing condition (pre-existing fracture to rear leg),” according to BLM’s gather report.

A total of 15 mares and three stallions are listed as “released” with no further explanation. The mares were not listed as being treated with fertility control in the gather report.

BLM set out to capture 2,060 wild horses and remove up to 2,030 from their home range. The agency said that it planned to treat and release with the fertility control vaccine PZP-22 up to 30 mares but only if it captures any of a small number of mares treated with fertility control in 2012, an action too small to be effective in halting future roundups. No updated plans on treating and releasing mares have been released.

BLM last removed wild horses from the complex during “emergency” bait-and-trap roundups in 2018 and 2016 during which a combined 228 wild horses were captured and five killed. During both of those roundups, BLM failed to treat and release additional mares with safe, proven and humane fertility control that could slow reproduction and halt future roundups.

In a press release before the roundup, the BLM said that the removal of wild horses was necessary “to reduce [the] overpopulation of wild horses within and outside the complex, where there currently is not enough water and/or forage, both for short- and long-term management, to support the number of horses in the area, and to prevent further degradation of public lands by helping to balance herd size.”

Altogether, the complex includes 1.2 million acres of public and private lands. In March 2001, the BLM estimated the population at 3,244 wild horses in or just outside the Herd Management Areas. The combined agency-set “Appropriate Management Level” is 361-638 wild horses.

By comparison, BLM allows up to 59,427 Animal Unit Months of seasonal private cattle grazing over the same acreage. That’s the year-round equivalent of 4,952 cow-calf pairs.

The roundup is part of an excessive and irresponsible BLM plan to remove “at least” 19,000 wild horses and burros from the range during Fiscal Year 2022.

Take Action: Support a fair share of resources for wild horses and burros.