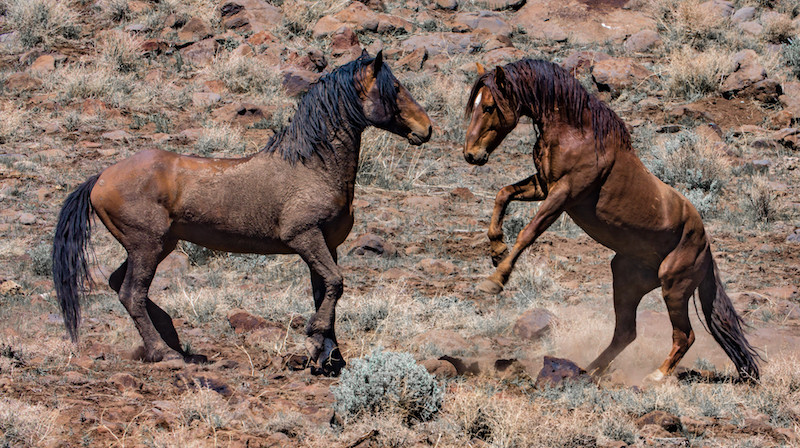 Wild horses are shown on the Twin Peaks Herd Management Area in this May 2021 BLM photo.

The Bureau of Land Management on Monday completed a helicopter roundup on the Twin Peaks Herd Management Area, located on the California-Nevada border. A total of 2,111 wild horses and 339 burros were captured during the roundup, which stretched from July 23-Aug. 15.

Thirty-one wild horses were killed during the roundup, with 15 listed as “acute / sudden” deaths. These included a stallion that suffered a broken neck during loading, a mare that escaped a temporary holding pen only to die from what BLM said was a pulmonary hemorrhage, and a mare that suffered a lacerated eye and collapsed eye socket.

Another 16 wild horses were put down for “pre-existing / chronic” conditions, including tumors, missing eyes, and what were deemed pre-existing knee and leg injuries.

Disturbingly, the BLM’s gather report notes that the on-site veterinarian was unable to determine what caused the death of eight horses, including four foals. In two cases, the report says that tissue and blood samples were sent to a lab for analysis.

The BLM set out to capture 1,978 wild horses, removing 1,866 from their home range and treating with fertility control then releasing up to 110 mares, as well as capture and remove 339 burros. The agency increased the number of wild horses to be captured after the roundup was underway.

Reached this week, a BLM official could not immediately say how many mares would be treated with GonaCon fertility control and released. Twenty-seven mules and one burro have already been released.

Captured wild horses were to be shipped to BLM off-range corrals in Litchfield, Calif., Bruneau, Idaho, and Palomino Valley near Reno, Nev., to be prepared for adoption or sale.

The BLM’s stated purpose for the removal was to “prevent undue or unnecessary degradation of the public lands associated with excess wild horses.”

During the spring of this year, the BLM estimated the population on Twin Peaks at 3,316 wild horses and 401 burros this spring.

Located in Lassen County, Calif., and Washoe County, Nevada, the Herd Management Area includes nearly 800,000 acres of public and private land. The agency-set “Appropriate Management Level” is 448 to 758 wild horses and 72 to 166 burros, or as low as one horse for every 1,639 acres and as low as one burro for every 1,111 acres.

Return to Freedom supports the use of fertility control to halt roundups; however, the number of mares that the BLM planned to treat is too low to slow reproduction in a way that could reduce the size and frequency of future roundups.

Demand that BLM take steps to ensure the health and safety of captive wild horses: Send a letter to Congress.

Demand transparency and accountability for the humane handling of wild horses and burros: Send a letter to Congress.