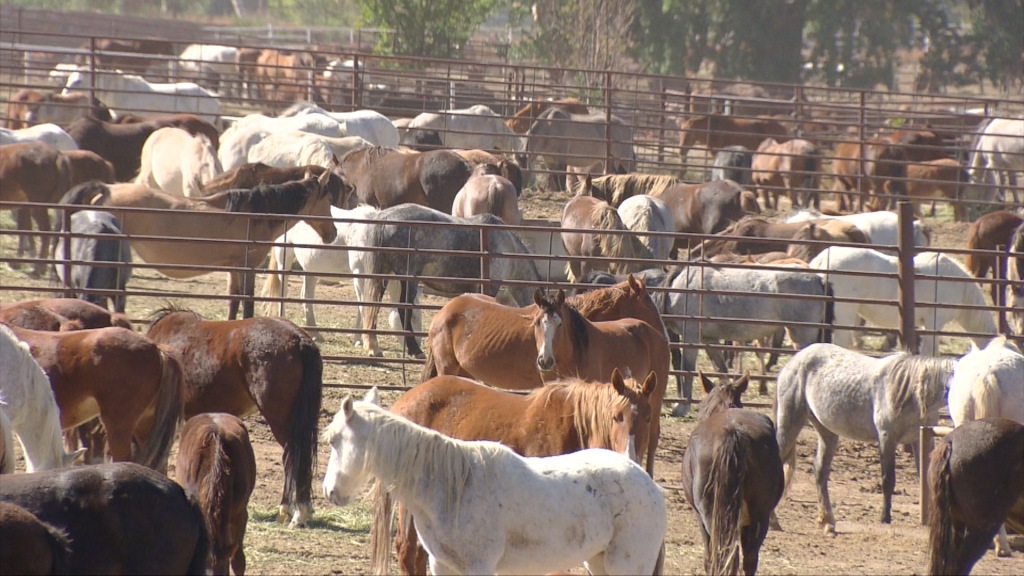 Wild Horses from the September Sand Wash Basin round up. Photo by Mark Neitro, CBS4.

TAKE ACTION: Tell Congress that BLM must improve and abide by humane handling standards on and off the range.

As published by CBS4

CAÑON CITY, Colo.– The decades-long controversy over wild horses in Colorado has been heating up in recent months, with Governor Polis even weighing in this summer, asking the federal government to pause horse roundups, after being inundated with calls and letters concerned about the treatment of the animals. So, CBS4 Investigates decided to take a closer look at what happens once the mustangs are rounded up and hauled out of the wild.

The East Cañon City Prison Complex, a collection of state prison buildings and ranches, is one of the places the horses are taken. CBS4 was given a rare tour of the ranch and horse pens where the mustangs are prepped for adoption.

It was the first time in years that news cameras were invited to see the horses at the prison. The Bureau of Land Management, a federal agency within the Department of the Interior, coordinated the tour, as it is the agency that runs and pays for the horses’ care and keeping at the state prison complex.

“Adoption prep includes giving them… an equine infectious anemia test, ensure that they don’t have that disease, that’s required by the state, and vaccinations and a freeze mark, so the freeze mark is a unique identifying number,” explained Colorado’s BLM wild horse facilities manager Steve Leonard.

Leonard says it’s necessary for the agency to round up the horses and relocate them to the prison, saying there are too many horses in the Sand Wash Basin for the resources that are available.

In September, Leonard told CBS4 Reporter Jamie Leary he didn’t think many of the horses would survive the winter.

The BLM estimates it spends more than $3 million in federal taxpayer money a year caring for the horses in Cañon City.

That’s a cost some horse advocates believe is unnecessary, saying more birth control measures should be implemented to allow horses to continue to live freely on the range.

“I would like to see the horses managed on our public lands where they belong,” said Carol Walker, a wild horse photographer and advocate, who has adopted three wild mustangs herself. “You can set up traps to bait the horses in with hay and goodies, and then it’s really easy to give them the birth control… there’s no reason they can’t do that.”

But Leonard says Colorado is already the leader in wild horse birth control, darting more horses than in any other state, but he says those efforts still haven’t been enough, making the roundups, and holding facilities like the Cañon City complex, critical.

But advocates like Walker have concerns the horses are being mistreated once they’re taken to Cañon City. Walker attended a Cañon City adoption event in August.

“I was horrified,” Walker said. “There was mud, muck, and urine, like ankle-deep, there was not much hay, and when I went to the yearling pen… half of them were skin and bones, including my little guy that I adopted.”

Her concerns are compounded by previous deaths at the facility. Federal documents obtained by the American Wild Horse Campaign show during the span of four months in 2020, 24 horses died at Cañon City and another BLM holding facility. The deaths due to starvation, injuries, and colic.

Another horse, PJ – or Picasso Junior, the son of the revered wild horse named Picasso, was euthanized this autumn after being hauled to Cañon City from the Sand Wash Basin in September. The BLM said PJ had eye cancer that had spread to the bone. Advocates were upset by the death, claiming PJ could have been adopted out and properly treated.

“To see these horses that I love and know and that I’ve been following for five years, in this condition was just, it was horrendous,” Walker said.

CBS4 asked Leonard what his response would be to allegations the horses are mistreated.

“I have two vet reports within the last 30 days to say that the horses are treated quite well here, we have the expected amount body condition on the horses, feet conditions are right,” Leonard said. “I’ll let that report speak for itself.”

That report – provided to CBS4 Investigates during the Cañon City tour – says “the vast majority of the animals… were in good condition.”

The report, prepared by Dr. Albert Kane of the USDA APHIS Veterinary Services in Fort Collins on Oct. 7, said 50 of the 1,993 horses examined at the facility were classified as “thin” and 12 classified as “very thin,” and those very thin horses were given separate pens with extra feed.

The vet recommended the facility “continue to sort horses by condition,” putting healthier horses together, and thinner horses in a separate pen. Walker says that wasn’t being done when she was at the facility’s adoption event in August. The report also recommended there be more feeding for the thin animals.

“The quality of the alfalfa hay being fed was very good and the manner in which the horses were fed was appropriate for the conditions present,” the vet report said. “Overall conditions at the facility were good with clean pens, feet in acceptable condition and animals with existing physical or medical problems identified and sorted into sick pens for veterinary examination and treatment as appropriate.”

The veterinarian reported “some mares in the Red Desert group had short tails, most likely from them being chewed by colts or other adult horses,” and the Red Desert horses would soon need hoof trimming.

Walker says the tail of the horse she just adopted in August was chewed, as well. Experts say tail chewing can be a sign of malnutrition, but some horses also chew tails out of boredom.