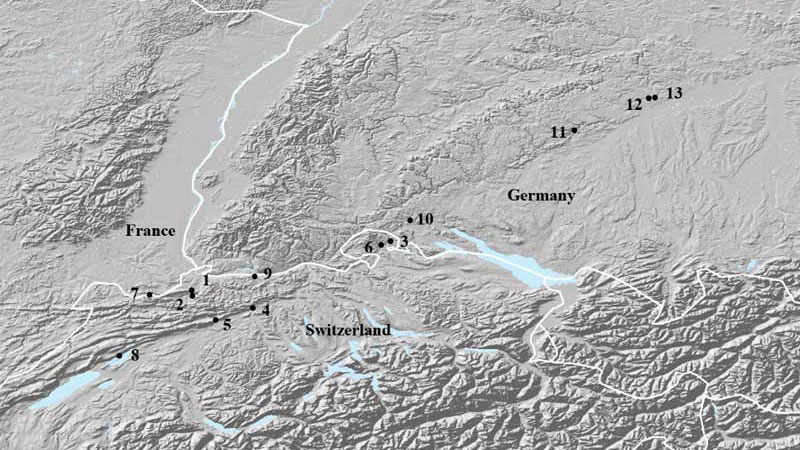 Areas where the ancient horse remains were recovered. A study team subjected samples of bone and teeth to mitochondrial DNA analysis.

The changing fortunes of wild horses over the last 41,000 years in the area that is now Switzerland have been described by researchers, who investigated mitochondrial DNA in ancient remains.

Researchers from the University in Basel in Switzerland based their findings on analysis of DNA from 92 archaeological horse remains – teeth or bone – from nine sites mainly adjacent to the Swiss Jura Mountains. The remains dated from roughly 5000 years ago to 41,000 years ago.

Julia Elsner and her colleagues, writing in the open-access peer-reviewed journal PLOS ONE, provide an account of the first regional study of Pleistocene and early Holocene horse populations in the area.

They noted that the 36,000-year time frame covered by their study included major environmental turning points such as the Last Glacial Maximum, followed by steppe vegetation, afforestation and the initial re-opening of the landscape by human agriculture.

They found that, following the retreat of the ice following the Last Glacial Maximum, a diverse population of horses expanded in the region.

Interestingly, at the same time, other studies have shown that a different development took place in Asia, where evidence indicated horse populations declined after the retreat of the ice.

Their investigations showed a discontinuous colonization of succeeding populations – essentially gaps in horses’ occupation of the region. It was, they said, a pattern that diverged from the larger Eurasian trend.

“The archaeological context of the horse remains studied here mirror hunter-gatherer colonization, settlement and hunting strategies in the region,” they reported.

They said they found only a small degree of continuity over time in horse matrilines − that’s lines of descent through females − in the Swiss and Swabian Jura (mountains).

“Horses were most abundant when the landscape was open and comprised the typical characteristics of steppe biota like herbaceous grassland interspersed with shrub flora.”

They said it seemed likely that climate, and not human activity, was the major driving force behind changes in the horse population in this region. The evidence indicated that population expansion occurred at the same time as intensified human encroachment of the area after the Last Glacial Maximum.

“However, Neolithic land use for farming and domestic animal husbandry presumably replaced the last remnants of the wild horse population in Switzerland [although] genetically, this remains to be proven.”

They concluded that the region of present-day Switzerland was inhabited by horse populations that had intervals and gaps. It could not, they said, be assumed that the local horse population continued to breed randomly over the 36,000-year period of the study.

“Horse populations mostly replaced each other during and after the Last Glacial Maximum, and only little continuity is observable.”

Diversity was highest among horses during the time of the Magdalenian culture, from around 17,000 to 12,000 years ago, as the population expanded into the newly accessible landscape.

“When the landscape transformed from open steppe into more and more densely forested woodland, the population probably shrunk and became fragmented.”

The study team comprised Elsner, Michael Hofreiter, Jörg Schibler and Angela Schlumbaum, all from the University of Basel.