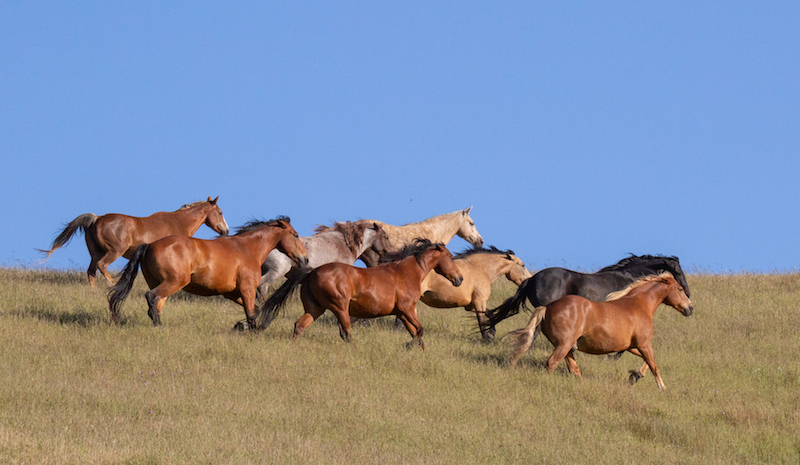 “Excess wild horse and burro populations undermine the health of public rangelands and adversely affect other uses of the lands and the species that depend on them,” reads the BLM budget section (see page 2). “The (Interior) Department looks forward to continued dialogue and support from Congress to achieve (Appropriate Population Management) levels and a fiscally sustainable program.” The budget proposal provides no detail beyond those two sentences.

Congress must not write BLM a blank check. It falls to appropriators to hold BLM’s feet to the fire on using taxpayer funding to implement proven, safe and humane fertility control in a manner that can truly phase out the agency’s decades-old, failed practice of trying to manage wild horses and burros by removing them from the range.

“Congress must not allow BLM to continue aggressively removing wild horses and burros from their home ranges with the vague promise that the agency will implement fertility control when it reaches its own arbitrarily low population targets,” said Neda DeMayo, president of Return to Freedom (RTF). “BLM has promised to use fertility control before and failed to do so, resulting in higher population numbers on the range and in off-range holding even as the agency decimated family bands and herds at one Herd Management Area after another.

“Lawmakers must press BLM to implement proven, safe, and humane fertility control now —  or the failed cycle of capturing and warehousing America’s wild horses and burros will not end. Simply doing more of the same will result in skyrocketing costs and further suffering for wild horses facing yet another roundup.”

–RTF will continue stressing to Congress that BLM’s fixation on “Appropriate Management Levels” (AML) — its arbitrarily set population target for wild horses and burros — is a fool’s errand. BLM must immediately implement proven, safe and humane fertility control to slow (not stop) reproduction and stabilize herd growth so that removals can be phased out. Population modeling shows that if BLM continues failing to address reproduction, it will keep chasing and only briefly achieving AML on some of the 177 Herd Management Areas, only to soon return to remove more wild horses and burros from their home ranges, over and over, as it has done for decades.

–The above steps are vital if Congress is to move BLM toward minimally intrusive on-range management that saves taxpayer dollars over the long run.

–As for the budget proposal’s mention of wild horses undermining “other uses of the lands,” RTF will continue to lobby Congress to push BLM toward more holistic management that considers the full impact of all federally mandated multiple uses of our public lands, including private livestock grazing and energy extraction. Given the dramatic changes in the condition of public rangelands due to climate change, Congress should call for BLM to allocate a fairer share of increasingly limited resources to wild horses and burros.

–Appropriators have been reluctant to micromanage BLM’s program. Unfortunately, lawmakers continue to write approvingly of a May 2020 BLM report to Congress that laid out a vague and often self-contradictory plan of aggressive roundups with little use of fertility control before reaching AML. “The Bureau is expected to continue and expand efforts in line with the May 2020 report,” the House and Senate Interior Appropriation Committees wrote in their guiding Fiscal Year 2022 report language, which also called the wild horse issue “a national crisis” and called for the creation of a multi-agency task force to address it.

–Typically, more than 60% of the BLM’s Wild Horse and Burro Program budget has gone toward the care of captured horses in off-range holding. That has left money for little else — including fertility control. Between FY 2014-2019, the program’s budget allocations stayed flat. Because of the diverse stakeholder efforts that RTF has been a core part of since its inception, we were successful in increasing the budget by $21 million for FY 2020, $14 million for FY 2021, and $21 million for FY 2022.

–In FY 2020, successful lobbying by RTF resulted in Congress providing additional funding and calling for (if not mandating) fertility control use for the first time as well as for relocating captured equines from corrals to pastures, another area in which BLM has failed.

–Appropriators also began requiring for the first time that BLM uphold its own set of humane handling standards. RTF is lobbying for those rules to be continually improved as well as for greater transparency and accountability in the upholding of those standards.

–For FY 2022, Congress included up to $11 million for “administration of and research on reversible immunocontraceptive fertility control.” RTF supports anything that calls out the need for more fertility control and emphasizes its increased implementation, but we know that far more funding will be needed to implement a real fertility control program.

–RTF will continue lobbying for a stronger version of Senate Interior Appropriation Committee language that was not ultimately included in the final FY 2022 bill: “While research into new fertility control technologies will be helpful in the future, BLM has valuable tools at its disposable today to control wild horse and burro populations humanely. For instance, the Committee is concerned that removals from the range can have the unintended effect of increasing foaling and therefore BLM should ensure that eligible mares are treated if they are to be released after a gather.”

–RTF will also continue lobbying for: an outside investigation of BLM’s Adoption Incentive Program and, if the program is to continue, for changes to better safeguard wild horses and burros including replacing most cash incentives with vouchers for vet care and training; an increase in range restoration to benefit all wildlife and the ecosystem; and an increase in public-private partnerships, largely to work with the public to identify and track herds as well as to implement fertility control on smaller Herd Management Areas.