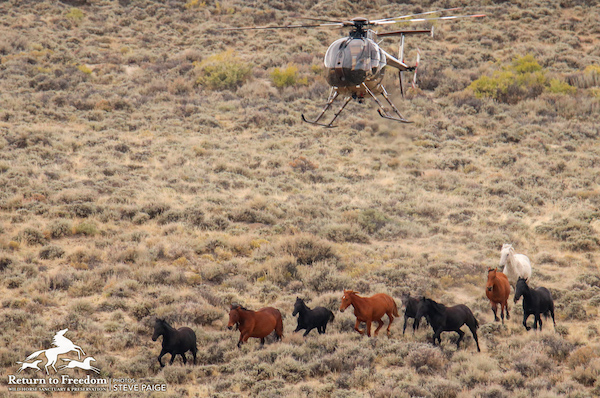 A contractor’s helicopter pushes wild horses toward the trap at the Great Divide Basin Herd Management Area on Sept. 28, 2017. Wild horses captured during this roundup were transported to corrals that are now the site of a strangles outbreak. RTF file photo by Steve Paige.

The Bureau of Land Management announced today that it was temporaily closing the Bruneau, Idaho, Wild Horse Off-Range Corrals due to an outbreak of equine distempter.

No wild horses will be transported in or our of the corrals until signs of infection have passed, according to a press release. A portion of the Wyoming wild horses had been due to be transported from Bruneau to BLM facilities and adoption events around the country.

BLM did not immediately report whether any animals had died as a result of the outbreak.

Equine distemper or strangles is a highly contagious upper respiratory infection caused by bacteria that spreads through direct or indirect contact between horses.

Wild horses at the Bruneau corrals include many from the Adobe Town Salt Wells Creek and Great Divide Basin Herd Management Areas in Wyoming that were captured during a 20-day helicopter roundup in fall 2017 that saw 1,968 wild horses captured and 15 killed.

The captured wild horses were divided by age and gender and eventually shipped to Bruneau or the Axtel, Utah, Wild Horse Corrals, itself the site of a strangles outbreak earlier in 2017. Twenty-one mares captured during the roundup were also collared and released as part of a movement study.