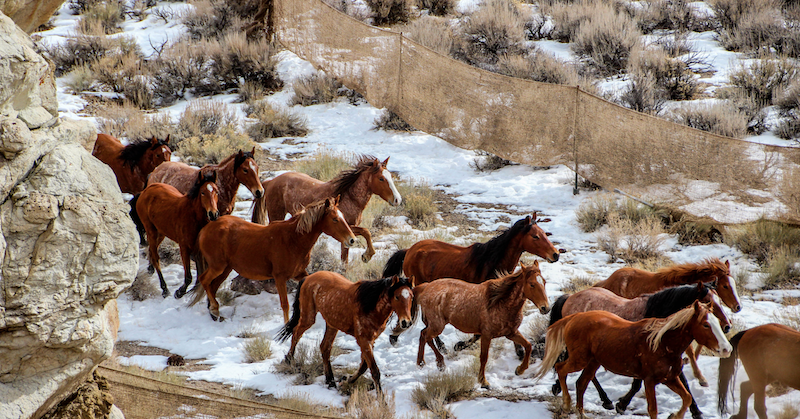 Wild horses driven into the trap during a 2017 roundup on the Reveille Herd Management Area in Nevada. BLM photo.

The Bureau of Land Management’s seven-day helicopter roundup on the Reveille Herd Management Area in Nevada ended on Thursday with 74 wild horses captured and 39 released back onto the HMA. No deaths were reported.

A total of 43 studs and 31 mares were captured and removed from their home range. The horses released included 23 mares treated with the fertility control vaccine PZP-22 and 16 studs.

The 105,000-acre Reveille HMA, located about 50 miles east of Tonopah in Nye County, Nev., was home to 222 wild horses in April 2019, before foaling season, according to a BLM aerial census.

A portion of the Reveille HMA is subject to a 1987, 2001 and 2002 court decisions requiring BLM to conduct an annual population count. If the count exceeds BLM’s Appropriate Management Level (set at 138 wild horses in 2001), the agency has 120 days to begin a roundup to remove “excess” wild horses, beginning with wild horses outside of the HMA’s boundaries.

About 16% of the Reveille HMA overlaps a 657,210-acre allotment on which privately owned livestock are allowed to graze. The operator is authorized to use 25,730 Animal Unit Months (an AUM is the amount of forage needed to sustain one cow, five sheep, or five goats for a month).

On the Reveille HMA, wild horses are allocated just 1,661 AUMs by comparison.

Captured horses during the roundup but not released back onto the range are to be transported to the Indian Lakes Off-Range Wild Horse and Burro Carrols in Fallon, Nev., to be prepared for BLM’s adoption and sale program.

In 2017, 151 wild horses were captured and 68 released from the Reveille HMA, including 30 mares treated with fertility control.

Members of the public that wish to view roundup operations must call the gather hotline nightly at (775) 861-6700 to receive instructions about where and when to meet.