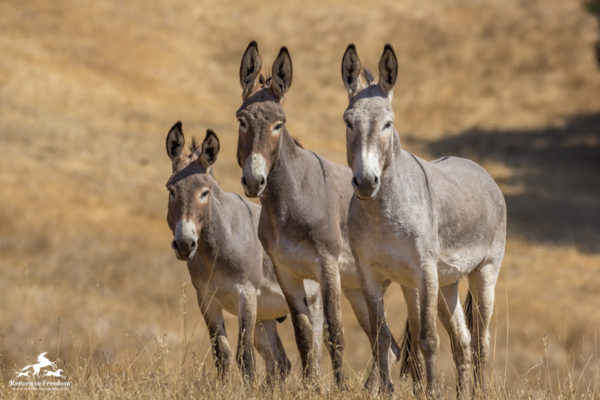 The Bureau of Land Management announced this week that it plans to go forward with a plan to remove wild burros in a helicopter roundup on the Sinbad Herd Management Area in Utah.

The BLM’s tentative gather schedule calls for 300 burros to be captured, with 260 removed from their home range and the balance released. Of those, 20 would be jennies treated with fertility control. The agency’s Decision Record, however, says that “approximately 278” will be removed.

The BLM did include a start date for the roundup in its press release, except to say that it would take place “this year.” The gather schedule has the roundup slated for April 1-15.

Also unclear: what form of fertility control will use, PZP or GonaCon.

Return to Freedom strongly supports the use of safe, proven, humane and reversible fertility control as a tool to halt roundups. However, we will always support the use of PZP over GonaCon. PZP has been studied and proven safe, effective, and humane over the longest period of time and in the greatest number of horses, including, importantly, the greatest number of horses in free-roaming situations.

The BLM estimates the current population of burros on the Sinbad Herd Management Area at 328. The agency-set “Appropriate Management Level” for the 99,241-acre HMA is 50-70 burros, or as low as one burro for every 1,985 acres.

By comparison, livestock grazing allotments that overlap the HMA are allowed up to 14,487 Animal Unit Months, the annual equivalent of 1,207 cow-calf pairs annually (one AUM equals the amount of forage needed to sustain one cow-calf pair or five sheep for one month). Actual use over the past six years averaged about 50 percent of the allowed maximum, according to planning documents.

In addition to the number of burros being over AML, the Decision Record’s rationale says that “monitoring data indicates that yearlong grazing use by wild burros is degrading rangeland health through heavy and severe utilization levels in localized areas” and that burros are competing with other wildlife for forage and water.

Burros removed from the range will be transported to an off-range facility to be readied for adoption or sale. BLM’s press release does not include information about to which facility the burros will be shipped. In the past, burros removed from the Sinbad Herd Management Area have been shipped to the Axtell, Utah, Off-Range Corrals.

In 2020, the agency removed 36 burros from the Sinbad Herd Management Area in an “emergency” bait-and-trap roundup. It failed to treat and release additional jennies with fertility control.

The Sinbad HMA is located on federal and state lands 30 miles west of Green River, Utah. It extends up to 19 miles on both sides of Interstate 70 from the San Rafael Reef to Eagle Canyon.

TAKE ACTION: Support greater use of safe, proven and humane fertility control that can end roundups: Send a letter to Congress.