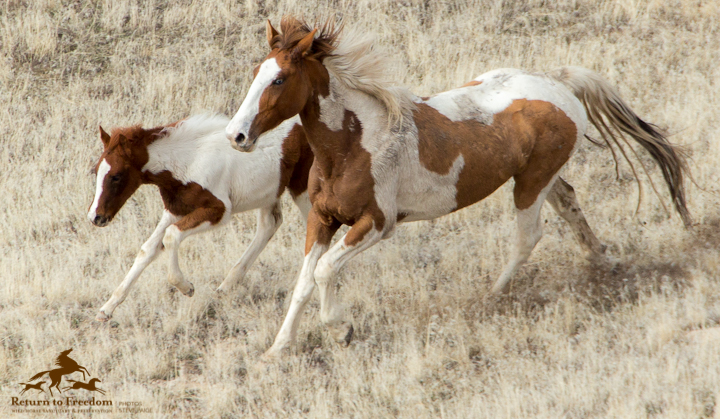 On Tuesday, the Bureau of Land Management ended its helicopter roundup at the Cedar Mountain Horse Management Area in Utah with the release of 228 wild horses back onto their home range.

The wild horses, ages 6-older, that were released included 104 mares treated with the fertility control vaccine PZP-22. Those treated were freeze branded on their necks with the letters “FB.” Mares treated previously were also numbered. Also released were 124 studs.

Among the wild horses released: A pinto mare photographed while captured with her foal on Feb. 17 after the pair made repeated desperate attempts at escape. Her foal has been transported to the Delta (Utah) Wild Horse and Burro Facility. According to BLM, a number of requests to adopt the foal have been received. Video footage of Monday’s release (above) by RTF humane observer Steve Paige appears to show the same mare as she returns to the range.

BLM had planned for the roundup to continue until Feb. 27  but opted to halt its roundup early, in part because of inclement weather.

BLM set out to capture up to 700 wild horses before the roundup’s end. Of those, contractors would separate out and permanently remove from their home range 200-300 “adoptable age” wild horses. The remaining wild horses captured were to be returned to the range, including an estimated 200 mares that would be treated with PZP-22 fertility control vaccine.

Return to Freedom supports the judicious use of fertility control as part of a multi-faceted approach to humane, on-range management of wild horses and burros rather than perpetuating an outdated, costly and broken system of traumatic helicopter roundups, separation of family bands, and the addition of still more wild horses and burros to the more than 45,000 already held in off-range facilities.

Other solutions for which RTF advocates include: providing incentives to public land ranchers to reduce grazing to give wild horses a more equitable share; public-private partnerships to relocate herds while maintaining family bands and social groups, in order to reduce pressure on the range; and a re-evaluation of the Appropriate Management Levels for wild horses and burros.

The 197,275-acre Cedar Mountain Herd Management Area, located about 50 miles west of Tooele, Utah, has a BLM-assigned Appropriate Management Level of 190-390 wild horses and a current horse population estimated at 960, according to the agency.

BLM planning documents related to the roundup can be found here.

Cedar Mountain is the fourth helicopter roundup of 2017.