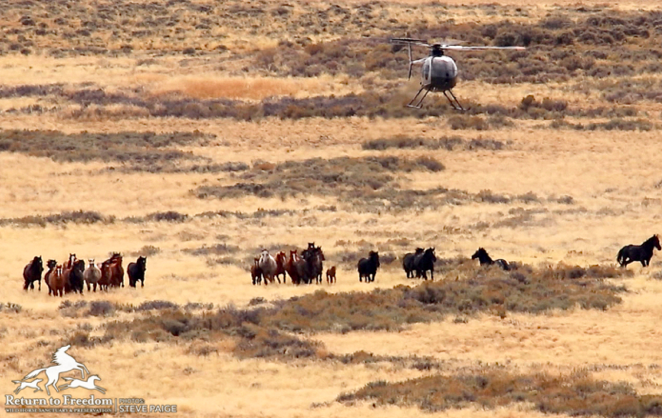 The Bureau of Land Management captured 88 wild horses on Wednesday during the first day of the helicopter drive trapping at the Cold Springs Herd Management Area near Juntura, Ore. The HMA

A total of 88 wild horses were captured during roundup, 38 mares, 33 studs, and 17 foals, according to the BLM.

A 15-year-old mare who was missing an eye, and partially blind in the other, was euthanized. A second 15-year-old mare died in the holding corral. A necropsy discovered a previous skull fracture, according to the BLM. One gray stud jumped out of the holding facility while contractors were feeding hay.

The agency is set out to remove an estimated 180 wild horses from the 29,883-acre HMA. The current wild horse population is 190.The agency-set “Appropriate Management Level” is 75 to 150 horses.

Of the horses captured, 60-75 will be released back to the HMA in order to “maintain a diverse age structure and sex ratio”, according to the BLM. The horses that will be released back into the HMA will include approximately 37 mares that are two years of age or older. Before release, the mares will receive PZP fertility treatment due to the “need to reduce population growth,” according to the BLM.

The horses that are selected to remain in captivity will be transported to Oregon’s Wild Horse Corral Facility in Hines, Ore. to be prepared for adoption.