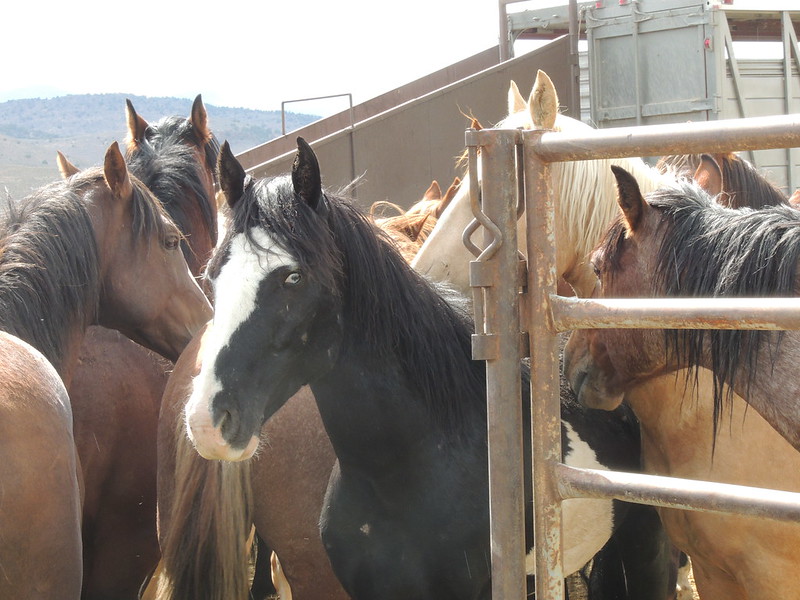 The Bureau of Land Management has ended its helicopter roundup on the Desatoya Herd Management Area, located about 77 miles east of Fallon, Nev.

A total of 191 wild horses were captured over 11 days. On Wednesday, a mare estimated to be more than 20 years old was put down due to “very poor body condition/severe tooth loss,” bringing the total number of wild horses killed during the roundup to six: five put down for what BLM deemed “chronic / pre-existing” conditions and one after suffering a head fracture.

Thirty-eight mares were treated with the fertility control vaccine GonaCon on Wednesday. The mares are to receive a second dose in about 30 days, then be released back onto their home range.

There are some early indications that 30 days is not a sufficient period between primer and booster to increase the effectiveness of GonaCon. We will continue to convey the latest science to the agency.

Return to Freedom strongly supports the use of reversible fertility control as a tool to halt roundups. However, we will always support the use of PZP over GonaCon. PZP has been studied and proven safe, effective, and humane over the longest period of time and in the greatest number of horses, including, importantly, the greatest number of horses in free-roaming situations.

In addition to the 191 wild horses, nine privately owned horses were captured and returned to their owner and two wild stallions “each blind in one eye with good body condition, characteristics and confirmation” have been released back onto the range, according to BLM’s gather report.

The BLM set out to capture 223 wild horses, then remove 150 “excess” wild horses from their home range and release 43 mares treated with fertility control and 30 stallions. It is unclear whether the agency still intends to release stallions, as all but 46 wild horses (including the 38 treated mares) have already been shipped to off-range holding facilities.

“By balancing herd size with what the land can support, the (BLM) aims to address resources issues related to drought and protect habitat for other wildlife species such as sage grouse, pronghorn antelope and mule deer. Removing excess animals will enable significant progress toward achieving the Standards for Rangeland Health,” the agency said in a press release before the roundup.

The agency-set “Appropriate Management Level” for the 161,700-acre Desatoya Herd Management Area is 127-180 wild horses. The BLM estimates the population of wild horses there at 277 wild horses, including foals born in 2021.

By comparison, BLM allows the grazing of privately owned livestock, sheep and horses of up to 9,133 Animal Unit Months on four allotments overlapping the Herd Management Area, or the annual equivalent of 761 cow-calf pairs. An AUM is defined as the amount of forage needed to sustain one cow and her calf, one horse, or five sheep or goats for a month.

The actual use for livestock grazing is lower, at 6,631 AUM, the annual equivalent of 553 cow-calf pairs, according to BLM planning documents. However, the document fails to say what period of time that level of use covers.

RTF strongly supports the use of fertility control to halt future roundups. However, BLM plans to treat mares with the fertility control vaccine GonaCon. Because GonaCon interrupts the hormone cascade, it may cause other behavioral changes that would affect herd dynamics. As such, RTF would like to see more studies to ensure that GonaCon meets the parameters of ethical and thoughtful wildlife fertility control.

BLM last removed wild horses from the Desatoya Herd Management Area in 2019: 431 wild horses were captured and one killed during a helicopter roundup. Twenty-five wild horses were released, including 10 mares treated with fertility control.

The roundup is part of an excessive, irresponsible BLM plan to remove “at least” 19,000 wild horses and burros from the range during Fiscal Year 2022.

TAKE ACTION: Support a fair share of resources for wild horses and burros.