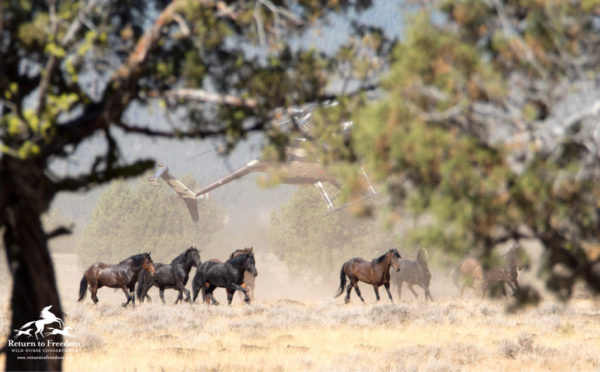 The U.S. Forest Service on Thursday captured 29 wild horses on the seventh day of a 600-horse helicopter roundup on the Devil’s Garden Plateau Wild Horse Territory, located at Modoc National Forest near Alturas, Calif. One stallion escaped the trap site.

A total of 154 wild horses have been captured so far. No deaths have been reported.

In its press release on Friday, USFS said that the Wild Horse Territory has been hit hard by prolonged drought.

“Many horses may look in pictures like they are in good shape, but corral staff report that before filling up on hay even the healthiest horses do not show the same solid structure for which the Devil’s Garden Herd is known,” USFS said in the release. “While weaker horses do not fare so well, horses who can compete for forage are still eating as they break through ‘exclosure’ fencing built to keep cattle from feeding on delicate riparian vegetation. These areas are protected for native wildlife and aquatic species including macroinvertebrates that support the entire food chain. They are negatively impacted by loss of vegetative cover and large ungulates wading in the water.”