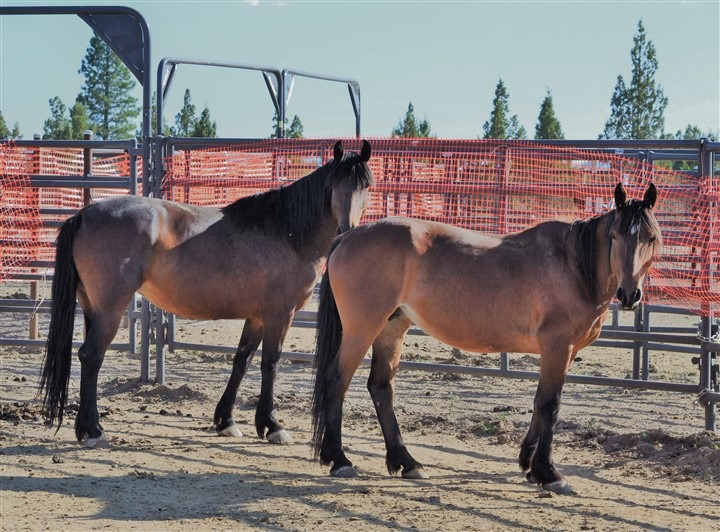 The U.S. Forest Service announced on Tuesday that it had placed into new homes the last of the older wild horses captured last fall – those animals most at risk of being sold to slaughter — with Return to Freedom providing sanctuary for 12.

RTF will give a home to 10 geldings and two bonded mares, one of which is pregnant.

They were among 932 captured during a helicopter roundup at Devil’s Garden Plateau Wild Horse Territory in the Modoc National Forest last fall near Alturas, Calif.

RTF and other plaintiffs remain involved in a court case filed in 2018 to keep the USFS from taking the unprecedented step of selling wild horses without limitations against slaughter. Settlement talks are ongoing.

The case becomes all the more important with USFS planning another roundup at Devil’s Garden for fall.

The plaintiffs contend that the USFS decision to sell wild horses without restrictions violates federal laws, as well as the agency’s own planning directives and management documents, and ignores the purpose and spirit of the Wild Free-Roaming Horses and Burros Act. Horse slaughter and the transportation of horses out of state for purposes of slaughter are also illegal under California law.

As the Devil’s Garden roundup was set to begin last fall — years after public comment on the planned roundup closed – the USFS announced that once the roundup was complete, it would briefly offer to sell captured horses 10 years old and older with restrictions against slaughter before dropping the limitation in January.

Were USFS to sell wild horses without restriction, it would fly in the face of prohibitions against selling federally protected wild horses to slaughter repeatedly included by Congress in annual appropriations bills.

Under federal law, USFS and Bureau of Land Management can sell wild horses ages 10-over or that have been passed over for adoption three times.

The majority of the wild horses captured at Devil’s Garden were transported to the BLM’s Litchfield Corrals in Susanville, Calif. Those included most of the wild horses ages 9-younger as well as pregnant mares 10-older. They are being offered for adoption.

As of July 11, the Litchfield Corrals had 277 wild horses from Devils Garden available for adoption, all but nine estimated to be ages 5-under.

They included 109 yearlings. Others have been shipped to adoption centers in Illinois, Colorado and Wyoming, while still others went to a Montana adoption event or Arizona for an inmate training program.

The balance of the captured Devils Garden wild horses, most ages 10-over, have been offered for adoption or sale with restrictions from the USFS’s Double Devil Corrals at Modoc National Forest. The USFS dropped the sale price for the older animals from $25 to $1, raising concerns that the lower cost would make them more profitable for kill buyers.

As the court case continued, a stipulated prohibition remained in place, keeping USFS from selling the remaining wild horses without restriction.

The USFS is planning another roundup of about 500 wild horses this fall.

According to a press release, USFS now estimates the wild horse population in and around the Devils Garden Plateau Wild Horse Territory at 1,802 adult horses, down from 2,246 in 2016.

The 232,520-acre Devil’s Garden has an agency-set “Appropriate Management Level” of 206-402 wild horses — as few as one horse for every 1,129 acres. The Forest Service estimates there are about 3,900 wild horses at Devil’s Garden.

By comparison, the Forest Service permits 26,880 Animal Unit Months of private grazing on the wild horse territory. One Animal Unit Month is defined as a month’s forage for one horse, one cow / calf pair or five sheep.

Actual livestock use varied between 63-73% of the permitted maximum from 2006-12, according to Forest Service planning documents.

For more information about the BLM adoption process, click here.