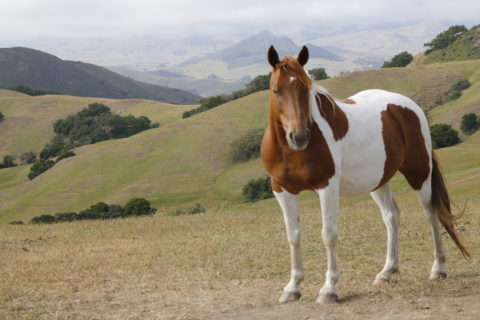 Target is a colorful brown and white gelding, named appropriately for the perfect brown and white markings on his rump. He was captured by the Bureau of Land Management during an August 2015 emergency roundup on the Wheeler Pass Herd Management Area in Nevada. He was one of just over 200 wild horses from the Cold Creek herd captured and removed from their home range due to a lack of resources brought on by severe drought. Twenty-eight horses were euthanized due to their poor body conditions. The Cold Creek herd is named after the nearby town of Cold Creek, Nevada where the horses sometimes wander.

A wild horse enthusiast who had been photographing the herd was distraught when she learned that the BLM had captured and removed the horses she loved. RTF was able to track down the captured horses, who were being fed back to health on a private ranch in Utah.

The photographer and local advocates were able to identify 10 of the horses they were familiar with who grazed together on the range. All 10 of the horses were relocated to RTF’s sanctuary where they are thriving together, including Target.

Target now roams RTF’s 2,000-acre satellite sanctuary in San Luis Obispo, Calif., with more than 80 other wild horses. Intelligent and curious, Target will approach people with caution. His best friend is Azure, an albino gelding also from the Cold Creek herd. The pair often wander off on their own, happy in their own world.

The Cold Creek horses are a colorful herd with bays, buckskins, pintos, albinos, palominos and chestnuts with flaxen manes and tails. They are relatively small, averaging 14 h – 14’2h but very hardy and now have been habituated to humans by grazing alongside roadways and contact from tourists and residents of Cold Creek. 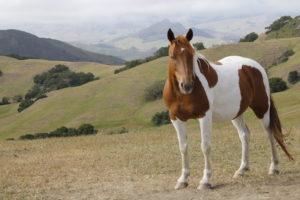 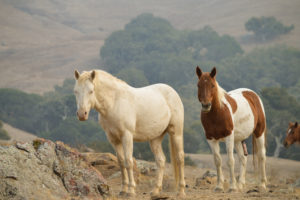 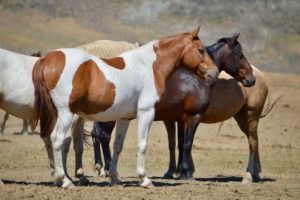 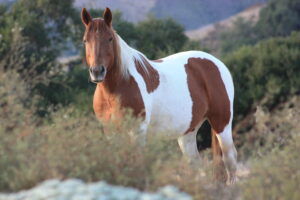 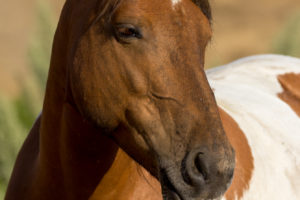