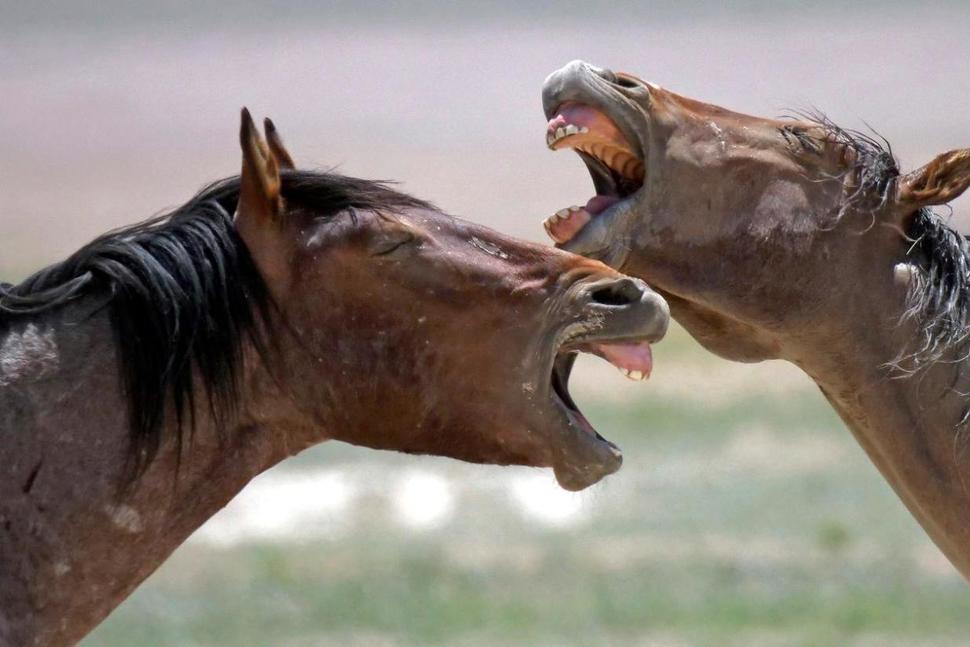 SALT LAKE CITY (AP) — Harsh drought conditions in parts of the American West are pushing wild horses to the brink and spurring extreme measures to protect them.

For what they say is the first time, volunteer groups in Arison and Colorado are hauling thousands of gallons of water and truckloads of food to remote grazing grounds where springs have run dry and vegetation has disappeared.

“We’ve never seen it like this,” said Simone Netherlands, president of the Arizona-based Salt River Wild Horse Management Group. In May, dozens of horses were found dead on the edge of a dried-up watering hole in northeastern Arizona.

Salt River Wild Horse Management Group. In May, dozens of horses were found dead on the edge of a dried-up watering hole in northeastern Arizona.

Parts of Utah, Colorado, Arizona and New Mexico are under the most severe category of drought, though extreme conditions are present from California to Missouri,  government analysts say. Parts of the region have witnessed some of the driest conditions on record, amid a cycle of high temperatures and low snowmelt that appears to be getting worse, National Weather Service hydrologist Brian McInerney said.

The dry conditions have fed wildfires that have destroyed hundreds of buildings across the West. This month, a firefighter was killed battling a blaze near California’s Yosemite National Park.

The federal Bureau of Land Management — which oversees vast expanses of public land, mostly in the West — says the problem facing wild horses stems from overpopulation aggravated by severe drought. The region is home to roughly 67,000 wild horses.

“You’re always going to have drought issues. That’s a common thing out on the range,” agency spokesman Jason Lutterman said. “What really exacerbates things is when we’re already over population, because then you already have resource issues.”

The agency’s emergency roundup in western Utah began a week ago, aiming to remove roughly 250 wild horses from a population of approximately 670. The operation is expected to take several weeks.

Once the horses are rounded up, the government gives them veterinary treatment and offers them for sale or adoption. Those that aren’t sold or adopted are transferred to privately contracted corrals and pastures for the long term.

A similar emergency roundup began this month in central Nevada, where officials said some horses in a herd of 2,100 could die from lack of water in coming weeks. The operation was quickly halted, ironically because of extreme rain, but will likely resume.

Since late spring, Netherlands’s Salt River group has hauled hay to a dozen locations outside Phoenix to feed a herd of starving wild horses.

Roughly 200 miles (320 kilometers) north, a couple near Gray Mountain, on the Navajo Nation, have spearheaded an effort to leave water and food for horses they say would die without human intervention.

In western Colorado, volunteers say they’re preparing to bring up to 5,000 gallons (18,900 liters) of water per day to a herd of 750 thirsty horses.

Areas of the basin are low on food due to livestock grazing, so the group is hauling the water to others parts with more plentiful grass, said Aletha Dove, another group co-founder.

Wild horse advocates have balked at the Bureau of Land Management’s insistence that wild horse populations are too high. Critics say the agency is using dry conditions as a smoke screen to shrink horse populations in response to pressure from ranchers whose livestock compete with the horses for grazing land.

“I do have a concern about the larger numbers that they’re pulling off, and then a bigger concern about the BLM under this administration using all kinds of excuses to pull off horses,” said Suzanne Roy, executive director of the American Wild Horse Campaign, an advocacy organization.

The agency is prohibited from euthanizing the wild horses it rounds up, though President Donald Trump has proposed allowing the animals to be killed or sold for slaughter.

Activists in Nevada held a rally last week at the bureau’s state headquarters in Reno to protest a planned roundup later this year.

Critics want the government to instead use birth control to manage wild horse populations.

The bureau says the fertility treatment, which must be administered yearly and fired from a dart gun at close range, is too difficult for use except in certain cases where herds are easy to approach and have markings that make horses distinguishable from one another.

Whatever the long-term answer, volunteers say their efforts can’t go on forever. Trucking in water and food could cost several thousand dollars per month and make horses overly dependent on humans, they said.

“If we don’t have a very good fall with a lot of rain — and it’s also warm so that our fall vegetation grows — we’re going to lose horses,” Wright said.