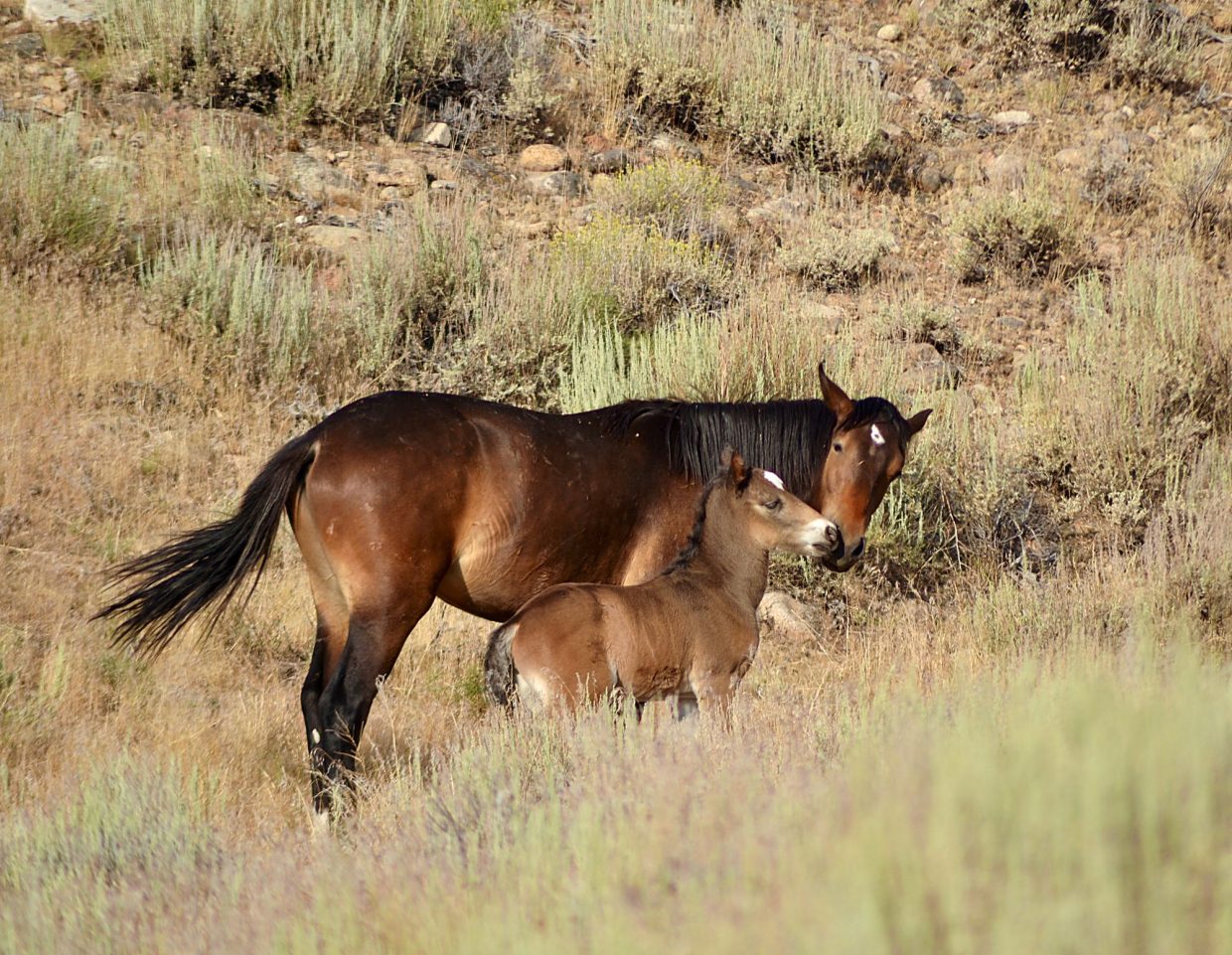 A mare and foal in the Pine Nuts. Photo by Sarah Drinkwine.

As published by The Record-Courier

About 70 horses living in the Fish Springs area of Nevada are going to be trapped and trailered off by federal officials in mid-July, according to the Bureau of Land Management.

Spokeswoman Lisa Ross said a helicopter gather for more horses is tentatively scheduled for sometime this fall, though no date has been set.

Fish Springs residents are gathering on Thursday to discuss the round-up.

Pine Nut Wild Horse Advocates’ Sheila Schwadel said the roundup was a surprise to her organization. A Fish Springs resident and the Advocates’ liaison to the BLM said she didn’t learn of the gather until the end of June.

“We were shocked at the BLM’s decision for a massive roundup,” she said Thursday. “The advocates have worked in good faith with the BLM and now they are refusing to incrementally remove horses in the Fish Springs area, and are going to round up horses to below the minimum numbers of horse they are supposed to have in the herd management area up north.”

The Advocates have devoted time and money to an effort to dose horses with a fertility control drug to reduce their numbers and to keep them out of the neighborhoods.

“Yet the BLM only wants to do a massive roundup both here in the Carson Valley and the north end of the Pine Nuts,” she said.

The group asked for reseeding efforts to restore native grasses after the many fires in the Pine Nuts, and fencing to protect sensitive areas, but Schwadel said they didn’t get an answer on either of those efforts.

“The community stands up for horses,” she said, pointing out that Advocates’ Facebook page has more than 44,000 followers.

“The community worked hard to develop a successful private-public partnership with the BLM, only to now find out that this massive roundup is planned for this month, and that the BLM is ignoring the wishes of the community if they proceed with this huge removal of our nationally recognized and locally cherished wild horses.”

In December, the BLM announced a 10-year plan that included gathers, use of a contraceptive, improving habitat in the Pine Nut Mountains herd management area.

Schwadel pointed out that Congress approved an area that included the southern Pine Nuts. The herd management area, however, does not.

The area is located in Carson City, Douglas, and Lyon counties. There were slightly more than 100 horses living outside the herd management area in the mountains above Johnson Lane and Fish Springs, according to a December 2016 population survey.

Birth control using PZP was first tested in Fish Springs by the BLM with the help of the Pine Nut Wild Horse Advocates and the American Wild Horse Campaign.

It was halted after activists challenged the plan in court.

“While we support the BLM’s decision to resume the PZP birth control program with our local partner, the Pine Nut Wild Horse Advocates, we are deeply concerned about the number of horses the BLM intends to remove from this public lands area,” said Field Operations Director Deniz Bolbol.

According to the BLM, there were 579 wild horses on the range, or more than three times the number there should be.

A census map shows 66 horses near the Fish Springs Area, but Bolbol said the agency only wants to manage 11-26 horses. Fish Springs lies outside the herd management area, and horses have been subject to gathers several times over the years.