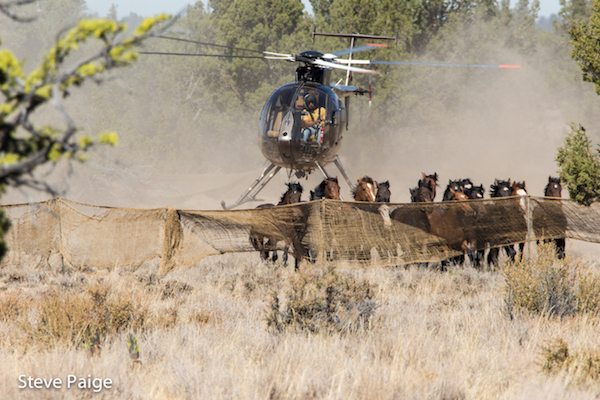 A contractor’s helicopter drives wild horses into the trap at Devils Garden during a 2016 roundup.

Statement from Neda DeMayo, Founder and President of Return to Freedom:

“It is devastating that the Agency has decided to take an approach that will prove not only lethal for hundreds of California’s wild free roaming horses, but will set a culture for the USFS that will continue to betray the trust of hundreds of thousands if not millions of California citizens and the remaining few thousand horses on California rangelands. We urge the Agency to rethink this tragic decision immediately and work with us on other alternatives.”

As many as 1,000 wild horses from California’s largest remaining herd face increased risk of death in foreign slaughterhouses under plans by the U.S. Forest Service.

Return to Freedom Wild Horse Conservation strongly opposes the Forest Service’s (USFS) plan to rid itself of federally protected wild horses by making them available to anyone for nearly nothing with no oversight or restrictions –making them easily disposable through the back door. We join Sen. Dianne Feinstein, D-Calif., and other state and national wild horse and animal-welfare organizations in demanding to know how the agency will prevent wild horses from being bought on the cheap and shipped to slaughter in Mexico or Canada.

The Spirit of the Wild and Free-Roaming Horses and Burros Act of 1971 — and overwhelming public opposition to horse slaughter — bedamned, the Forest Service is taking advantage of the U.S. Congress not explicitly placing language prohibiting the Forest Service from selling wild horses without restriction, unlike the restrictions Congress has previously placed on the Bureau of Land Management.

The Forest Service began a month-long helicopter roundup on Wednesday at the Devil’s Garden Plateau Wild Horse Territory, located about seven miles north of Alturas, Calif. Sixty-six wild horses were captured and none injured, according to the agency.

The estimated 700 or so younger wild horses captured will be transferred to the Bureau of Land Management’s Susanville, Calif., holding corrals, where they will be offered for adoption.

Speaking before the National Wild Horse and Burro Advisory Board on Wednesday, Hope Woodward of the Forest Service said that the Forest Service has contracted with BLM to care for the horses for one year but that it has not solidified plans to move unadopted horses to BLM’s long-term holding pastures — leaving the door open to sales that could result in still more wild horses going to slaughter.

Return to Freedom has a number of other concerns about the roundup:

Sadly, this is not the first time that Modoc National Forest has attempted to work in the gray area of the law to the disadvantage of the territory’s wild horses.

In August 2017, the United States Court of Appeals for the District of Columbia overturned a decision by the Forest Service to cut by 23,000 acres the area available to wild horses, in a victory Return to Freedom shared with partnering advocates in the suit. After years of managing the area for wild horses and scores of public meetings, the agency in 2013 claimed that its use for wild horses had been an administrative mistake.

The Forest Service says it is conducting the 2018 roundup “to help address impacts on aquatic resources, wildlife, grazing and traditional cultural practices.”

“Reducing the population will allow range and riparian ecological conditions to recover, while also supporting wild horse herd health by reducing competition for limited food, water and habitat,” the Forest Service wrote in a press release.

Wild horse advocates local to the area have urged the Agency to implement a robust fertility control program and expand on its public/private partnerships to develop a proud wild horse conservation program for one the last remaining California herds.