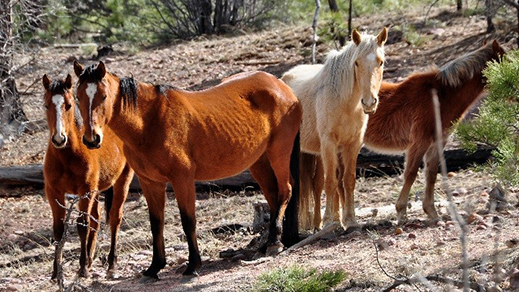 As published by 3TV/ CBS5

Law Enforcement agents with the U.S. Forest Service have maintained a visible presence along primitive roads in the area where someone or some people have shot and killed dozens of wild horses over the past four years. That is according to a group of advocates for the horses, who also patrol the roads in the area in an effort to protect the horses.

“I think they’re taking it seriously,” said Betty Nixon, who is one of the women who spend days and nights searching for the killer.

“I’m listening for any sounds – gunshots. I’m listening for gunshots,” said Nixon, as she drove through the Apache-Sitgreaves National Forest on a recent Monday night, as the full moon was rising on the horizon.

Three more wild horses were found shot in the Apache-Sitgreaves National Forest [Feb. 13], making it more than 30 that have been killed since October 2018.

Several of the killings took place under a full moon or before a snowstorm. The latest occurred at the end of December.

Nixon and her fellow horse advocates have counted 40 dead horses since the shootings began, although the Forest Service reports the official count as under 30. The Heber Wild Horses are protected by federal law.

AZ Family Investigates recently spoke to the Chief of the U.S. Forest Service about the issue when he was in Phoenix for an unrelated event.

“While I don’t know the specifics about this case, I have all the confidence that if our law enforcement needs additional help, that we’ll provide that,” said Randy Moore, the Forest Service Chief.

“I’m sure we’re doing everything we can to catch this person. But like always, it’s going to take people in the community as well. What do you know? What have you seen?” said Moore.

Not everybody in the community likes the horses, and some argue that they compete with cattle, deer and elk for food. One of the horse advocates even received a direct threat three years ago.

“The man said that he was going to come into her home at night, cut out her tongue and slit her throat,” said Nixon.

In a past press release, the Forest Service asked that members of the public who come across an injured or deceased horse call the Black Mesa Ranger District at 928-535-7300 to report it immediately. Anyone who belives that they may have information about the shootings is asked to call  the Navajo County Sheriff’s Office tip line at 1-800-78CRIME.