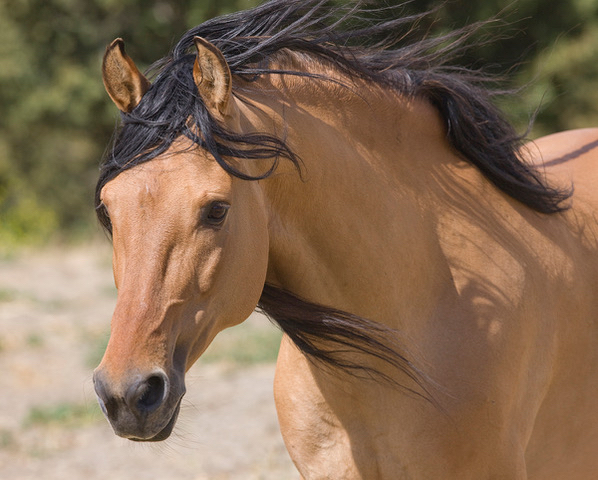 Return to Freedom American mustang ambassador Spirit has been inducted into the Horse Stars Hall of Fame by the EQUUS Foundation and the United States Equestrian Federation.

The Hall made its announcement today, May 8 – Spirit’s 23rd birthday!

Spirit is the Kiger mustang stallion who served as the artists’ muse and model for the 2002 animated film “Spirit: Stallion of The Cimarron” (a Netflix series, “Spirit: Riding Free,” is now on its third season). DreamWorks Animation chose as Spirit’s permanent home RTF’s American Wild Horse Sanctuary.

Here, the curious, smart and mischievous stallion with the thick, wavy multicolored mane remains a favorite of visitors of all ages and still attracts fans from around the world. The son of two wild horses, Spirit has inspired many to learn about — and advocate for — the thousands of nameless wild horses and burros whose survival on our public lands remains in jeopardy. Spirit has also appeared at a number of education and outreach events.

“In 2002, millions of youth and adults around the world became aware of the American Mustang and their challenge to survive in a changing world thanks to the animated feature film. Having Spirit reside at the sanctuary has helped to engage youth as well as the equine community so they can learn what we stand to lose on our federal lands if we let the Mustang disappear,” said Neda DeMayo, founder of RTF.

Spiritis the second American mustang ambassador from RTF inducted into the Horse Stars Hall of Fame, following Sutter, who in 2017 became the first horse born on the range honored by the Hall.

Spirit, center, with DreamWorks Animation’s Spirit from the film, left, and Spirit’s son, right, from the series. Center photo by Tony Stromberg.