How to manage wild horses? Many criticize BLM’s plans for state herds 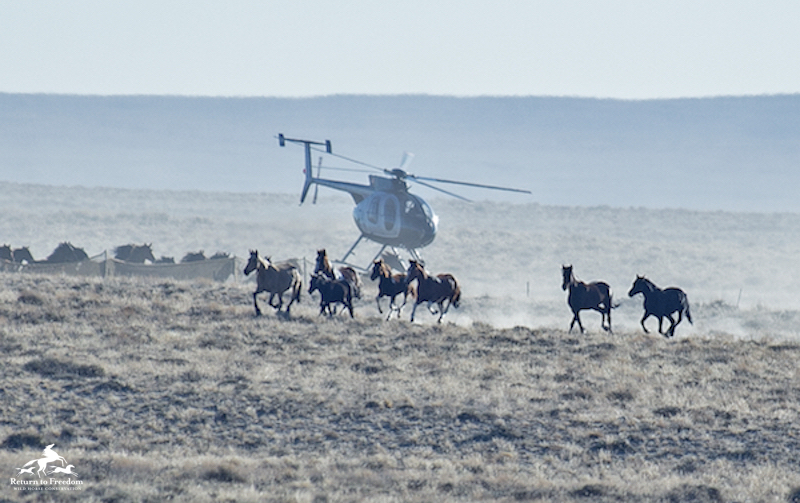 A contractor’s helicopter pursues wild horses near the trap site on the Red Desert Complex in Wyoming on Oct. 10, 2020. Photo by Meg Frederick.

As published by Cody (Wyo.) Enterprise

Ada Inbody will often drive out to the McCollough Peaks with her dogs just to watch the wild horse herd. Since her days growing up on a farm in rural Oklahoma, she has been riding horses, but wild horses for her have always garnered special attention, sometimes keeping her up late in the night thinking about the equine.

“I just think they’ve been given a raw deal,” she said. “They are my life.”

There are few topics locally that draw as much passion and contention as the subject of wild horses.

These animals mean many different things to many people. To their fans, the horses represent a symbol of the West and the American spirit. To their opponents, they are more of a nuisance to the landscape and harmed by the BLM management and federal oversight they receive.

A recent Natural Resources Management Plan unveiled by the Park County commissioners showed the divide between ranchers and those advocating for protection of the horses as a wild species. The federal government controls the reigns on how the horses are managed, a situation which leads to frustration on both sides.

The BLM’s Wild Horse and Burro Program came forth from the Wild and Free-Roaming Horses and Burros Act passed by Congress in 1971. The law identified wild horses and burros as “living symbols of the historic and pioneer spirit of the West” and assigned the BLM and the U.S. Forest Service the responsibility of managing and protecting herds in areas where wild horses and burros were found roaming in 1971.

“The worst thing that ever happened was having the government involved in the management,” Park County Commissioner Chairman Lee Livingston said.

Livingston, also an outfitter, has worked with horses nearly his entire life.

“Nobody respects them more than I do,” he said.

In May, President Joe Biden’s administration proposed a $35 million increase to the Wild Horse and Burro Management program annual budget, which if approved would reach $140 million. The administration also plans to continue former President Donald Trump’s roundup plan to remove 90,000 wild horses and burros from public lands over the next five years at a cost of nearly $1 billion, a proposal that drew harsh criticism from wild horse advocacy groups who see the roundups as the BLM prioritizing livestock grazing.

Others oppose it for different reasons.

“It’s costing the taxpayers millions of dollars and could have been taken care of the way it was being taken care of years ago,” Livingston said.

Livingston said the quality and health of local herds was much better under the purview of local ranchers and cowboys, who he said would adopt animals in the winter possessing “better qualities,” with other equines determined to have bad genetics sent to slaughter houses.

Growing up working at Glen Fales’ ranch, Livingston said some of the best horses there were from the wild.

“We had good stock, we don’t have that anymore,” he said.

Inbody said nearly any wild horse has the potential to be trained.

“It’s amazing what a good horse trainer can do with those horses,” she said.