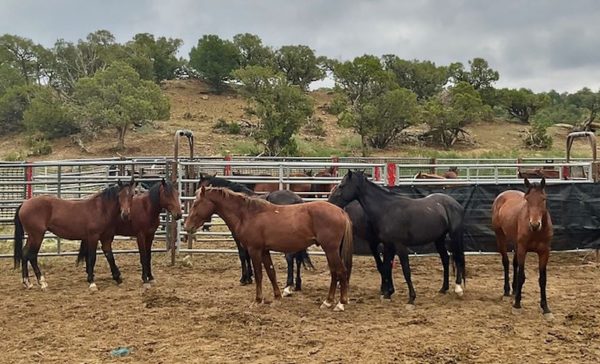 Wild horses photographed in temporary holding pens after being captured on the West Douglas Herd Area on July 29, 2021. This and other photos posted by the BLM during the roundup appear to show healthy horses. The West Douglas wild horses have been hardest hit by a disease outbreak at the Cañon City holding corrals.

Thursday, April 28, update: The Bureau of Land Management now says that an equine influenza virus is the likely cause of a respiratory disease outbreak that has now killed 95 wild horses in the Cañon City (Colo.) off-range holding corrals. Click here to read more.

On Wednesday, the Bureau of Land Management announced that 85 captured wild horses have now died from an “unknown yet highly contagious and sometimes fatal disease” with respiratory and neurological symptoms at its crowded Cañon City (Colo.) corrals.

The corrals are now under a voluntary quarantine, the BLM said in a press release, and the agency is working with local, state and federal officials to determine what killed the horses and how best to respond.

Wild horses hit hardest by the outbreak are among the 457 captured from late July to early August of 2021 on the West Douglas Herd Management Area in Western Colorado, near the Utah border, and some from the Sand Wash Basin HMA in northwest Colorado, the BLM said.

Although photos and videos posted on the BLM website during the West Douglas roundup appear to show healthy wild horses, a BLM spokesman seemed to imply in an interview with television station CBS4 this week that the West Douglas wild horses were not in good shape when they arrived at Cañon City last summer. “That is a really tough area for wild horses to exist and remain healthy,” he said.

The State of Utah confirmed cases of equine infectious anemia, also known as swamp fever, on tribal lands in the nearby Uinta Basin. The BLM was apparently concerned enough that it segregated the West Douglas wild horses from others in Cañon City, pending testing.

When wild horses are stressed from being chased into traps by helicopters, separated from their family bands and their home range, then placed in trucks and corrals that inhibit their movement for the first time, illness is sadly inevitable. But negligence is inexcusable.

At the large corral facilities like Cañon City that together house about 22,000 federally protected wild horses and burros that have been removed from their ranges, horses are penned in large, separated groups: mares, geldings, mares with foals, weaned foals, or studs. They stand on dirt. Too often, there are no shade structures.

The BLM says that the holding facility at the Colorado Department of Corrections in Cañon City can hold up to 3,000 horses. Today, 2,550 captured wild horses reside there.

Wild horses arrive after suffering extreme trauma during capture and transport after being forcibly removed from their family and social bands, their freedom and home on the range.

Return to Freedom feels strongly about the agency’s responsibility to provide a clean, open and more natural environment. For over 20 years, RTF has lobbied the BLM to at the very least relocate bonded family bands and social groups together in order to reduce stress and better support their well-being.

In the world of horse management, biosecurity is a concern at large barns, stables and event locations. To limit the spread of bacterial, viral, or fungal infections that can cause illness or death, tight biosecurity measures are implemented, with tighter measures if disease occurs.

Daily wellness checks and assessments of cleanliness, drainage, shelter and insects are important. Trends such as deteriorating condition, fever and loss of appetite can be documented. Horses can be treated or moved as necessary.

It is standard procedure to isolate newly arrived horses for two to three weeks. New horses should be fed and cleaned last, so that personnel do not inadvertently transfer something carried in by a new horse to the existing population.

Clean hands and equipment, including feed bins, manure forks, buckets, and even handlers’ boots, are all part of a thoughtful disease management regime.

If there is disease outbreak, or when a new horse is isolated in quarantine, equipment is not shared between the isolation and main areas, and sanitizing foot washes must be utilized. Logs for medications must be kept.

Any of these things can go wrong or be mismanaged – on a good day. Now magnify that by an overcrowded facility.

Large-scale holding corrals are extremely difficult to do well – maybe impossible. Yet, the BLM intends to dramatically add to the numbers in off-range holding, which also include another 39,000 wild horses living on leased or government pastures.

This year, the agency plans to remove a record 19,000 wild horses and burros from their home ranges (by comparison, it plans to treat just 2,300 with proven, safe and humane fertility control, which could reduce the frequency and size of removals and end them as the agency’s primary management tool).

We’ve repeatedly said that this aggressive removal plan is not just excessive but irresponsible, because BLM lacks the infrastructure, staff and contracts to run its program — much less properly protect and care for captured wild horses and burros.

Join us in urging Congress to demand that steps are taken to reduce the chances of further tragedy, including developing comprehensive plans to shift management away from endless gather-removal-warehousing of America’s wild horses.

Take Action: Tell Congress that BLM must take steps to ensure the health and safety of captive wild horses and burros