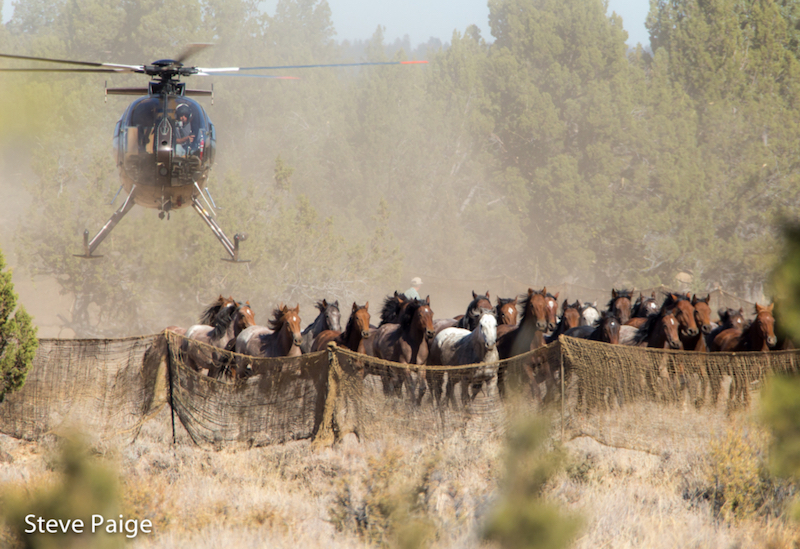 Return to Freedom Wild Horse Conservation and a coalition of advocates on Thursday filed a lawsuit to halt the U.S. Forest Service’s plan to sell hundreds of California wild horses without restriction, placing them in jeopardy of ending up in the slaughter pipeline.

The plaintiffs contend that the Forest Service’s recently announced plan to sell an estimated 300 older wild horses without restrictions violates federal laws, as well as the agency’s own planning directives and management documents, and ignores the purpose and spirit of the Wild Free-Roaming Horses and Burro Act.

The Forest Service is attempting to rid itself of the more than a fourth of the wild horses in California’s last large herd. The agency is conducting a helicopter roundup of 1,000 horses at the Devil’s Garden Plateau Wild Horse Territory at Modoc National Forest near Alturas, Calif.

Wild horses are being separated from their family bands and herds and sorted by age and gender, with horses 10 years old and older – including mature stallions and pregnant mares – in greatest jeopardy of being sold to kill buyers who will transport them to Mexico or Canada for slaughter.

“It is devastating that the U.S. Forest Service has decided to take an approach that will prove not only lethal for hundreds of California’s wild free-roaming horses, but will set a culture for the Forest Service that will continue to betray the trust of hundreds of thousands — if not millions — of California citizens and the remaining few thousand horses on California rangelands,” said Neda DeMayo, president of Return to Freedom. “We urge the agency to rethink this tragic decision immediately and work with us on other alternatives.”

Wild horses ages 10 and older are being placed in corrals at Modoc National Forest, where they will be put up for sale without limitation as early as Jan. 10.

The agency says that it will first sell the older horses with some limitations. These include prohibiting the purchase of wild horses in any way that would subject them to slaughter for human consumption as well as providing adequate transportation and adequate accommodations. After 60 days, however, the Forest Service plans to sell remaining wild horses — without restrictions — for as little as $1 apiece.

“Capturing wild horses just before the onset of winter increases the risk to the most vulnerable animals,” DeMayo said. “Having survived being chased over extremely rocky ground by a helicopter, the oldest horses will now be placed in unsheltered holding corrals in harsh weather at a time when feed is at its most expensive. Placing hundreds of horses in good homes in just 60 days is even more difficult at this time of year.”

Captured wild horses estimated to be under the age of 10 are being transported to Bureau of Land Management corrals in Susanville, Calif., where they will be offered for adoption. Forest Service officials have said that arrangements have been made for BLM to keep captured wild horses there for one year, but no longer, possibly placing them in jeopardy of eventually being sold without restrictions where they will easily end up in the slaughter pipeline as well.

Return to Freedom has joined with other wild horse advocates, the public, and federal and state lawmakers to urge the Forest Service to respect the overwhelming public opposition to horse slaughter and abandon its sale plans which opens the door to the slaughter pipeline.

Past polls have found about 80 percent of Americans oppose horse slaughter. In 1998, Californians passed a ballot measure, Prop. 6, barring horse slaughter in the state, sale of horse meat for human consumption and transportation of horses out of the state for purposes of slaughter.

Should the Forest Service go forward with its disastrous plan for unrestricted sale, Return to Freedom has been preparing to help as many at-risk wild horses as possible. RTF is working with supporters who can provide homes for the older wild horses that will be put up for sale as well as those interested in adopting those who are not candidates for sale to slaughter. RTF is helping to coordinate transportation with nonprofit Fleet of Angels and volunteers on site to assist our supporters with purchasing and adopting horses.

* Please click here if you can provide a good home to two or more wild horses, especially those ages 10-older, offer transportation for rescued horses, or would like to donate to support the rescue effort.