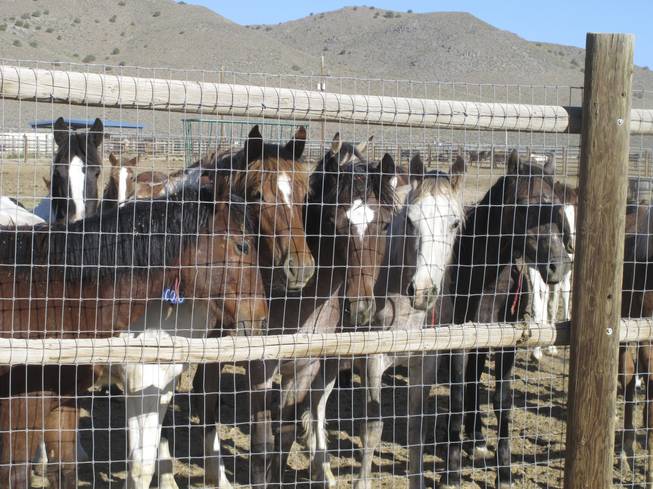 As published by The Las Vegas Sun

The classic image of the untamed horse galloping across the Southwest terrain is a beloved one, re-created throughout American lore and media. It’s also one that is today rife with controversy as some argue that the horses are an invasive species, introduced to the continent years ago, with a skyrocketing population that needs to be managed.

Wild horses throughout Nevada are being rounded up this summer through emergency gathers facilitated by the Bureau of Land Management. BLM officials say the removals are necessary for preservation of the land and protection of the herds, as sources of water and food are becoming scarce.

The Red Rock Herd Management Area 20 miles west of Las Vegas only has the capacity for 16 to 27 wild horses on its nearly 162,000 acres, according to the BLM. On July 29, the organization began removing 225 excess horses through a bait and trap method, where water and food are used to lure horses into pens.

BLM officials say that without emergency action, the condition of these horses is expected to deteriorate, potentially resulting in equine deaths within a few weeks.

But some wild horse advocates want to do away with the removals altogether, saying it’s not only a waste of BLM resources, with the organization currently holding 46,000 wild horses in federally funded corrals, but also harmful to the horses.

Nevada is home to more than half the wild horse and burro population at just over 48,300. BLM officials say these lands are well beyond capacity, with Nevada’s Appropriate Management Level — a figure used to determine the number of wild horses and burros that can thrive in balance with other uses of public land — at just under 13,000. But some wild horse advocates claim that the idea that horses are single-handedly degrading public lands is a misnomer and that the BLM greatly exaggerates the wild horse population figures, rigging management level numbers against the horses and leaving out how cattle ranchers are also contributing to the grazing problem.

“The BLM’s ambiguous claims are simply wrong and are manipulative because they do not give pertinent data and put it in context,” said Deniz Bolbol of the Pine Nut Wild Horse Advocates, which is based in Gardnerville.

Bolbol added that management level should stand for “Artificial” Management Level, since the figure is significantly lower for horses than for cattle.

While some of these horses may descend from a long lineage of wild horses, BLM spokeswoman Jenny Lesieutre said they’re still not a natural part of the ecosystem, their natural predators only being those trying to remove them.

Lesieutre, who has five horses of her own, said that although she loves her animals, it would be irresponsible for her to have more than she can handle. That’s how she feels about wild horses on public lands, which she said not only degrade the natural environment but will also eventually overgraze themselves into starvation.

“When they completely demolish a plant, 99% of the time it’s invasive weeds that come back, which have no protein,” she said. “So they fill their bellies with something that’s giving them zero nutritional value.”

Lesieutre said that while horses are sturdy animals, they aren’t immune to the effects of overgrazed lands. “It’s horrifying to see animals starving on the range,” she said. “The logical and humane thing to do is to manage the population,” she said.

This law also enables these agencies to use helicopters to capture and remove wild horses and burros, a practice that wild horse advocates say is inhumane and incites panic among horse bands, separating mares from their foals and running some horses to their deaths.

The captured horses are then placed into the BLM’s Adoptions and Sales program through partnerships with organizations throughout the nation. Since 1971, more than 240,000 horses have gone through this program, according to the BLM. Those not placed for adoption are given a vaccine that halts fertility for about a year and are then released back into the wild. The rest are either sold or held in off-range corral facilities.

Advocates say that the roundup option is not only cruel but unfeasible for the long term.

In Fiscal Year 2017, for example, the BLM spent almost 60% of its $81 million budget on the care of animals removed from public lands, according to a 2018 BLM report to Congress.

“That’s nearly $48,000 for one unadopted horse that remains in BLM’s care over its lifetime. The cost of caring for the 46,000 unadopted and unsold animals currently in holding will top $1 billion over their lifetimes,” the report said.

One 2013 study by the National Research Council found that removing horses and placing them in long-term holding facilities is economically unsustainable and that it perpetuates population problems in some areas by keeping populations below food-limited carrying capacity of the land, which ends up causing the population to grow at a faster rate.

But over the last few years, the BLM has been ramping up their roundup practices to respond to the population growth.

Advocates say a better strategy is an investment into more humane birth control programs, like the porcine zona pellucida vaccine, which can either be administered by hand injection or via dart rifle.

Neda DeMayo, founder and president of horse advocacy group Return to Freedom, said her organization has been pushing for birth control as a feasible population control solution for more than a decade.

“In 2007, BLM was within 1,000 horses of its own AML but the agency has never invested as much as 4% of the program budget on safe, proven fertility control,” she said. “This non-lethal proposal calls on Congress to specifically fund fertility control to move BLM toward humane, on-the-range management while also providing critical protections for the horses on and off the range.”

DeMayo said she has been involved with horse management policy for more than 25 years and nothing has changed.

“We have always said that if we were going to really solve the problem, it will involve sitting down with the people who don’t agree with us,” she said.

This means sitting down with people who want the horses removed, sterilized or euthanized — something Return to Freedom does not stand for — to come up with a solution everyone can live with.

Last spring, the group partnered with rangeland stakeholders, the American Society for the Prevention of Cruelty to Animals, the Humane Society of the United States, and the Humane Society Legislative Fund and introduced a proposal to Congress that they say would offer a humane, non-lethal path toward the management of these horse populations.

DeMayo said this proposal accepts the fact that the BLM will continue horse gatherings and roundups under the law, but proposes that the BLM implement more humane fertility control to slow population growth. It also bars the BLM from euthanizing healthy horses and burros, something DeMayo said Return to Freedom has been fighting for the past several budget cycles.

Most of the elements of this joint proposal advanced to the U.S. House of Representatives last month.

But some horse advocates like Bolbol believe the proposal “sells out” the horses, since it still keeps roundups on the table. She said that the population problems can be managed through fertility control alone.

“The fact that it has moved through the House is downright scary,” she said.

But DeMayo said what would really “sell out” the horses is doing nothing, and that the roundups will continue under the law with or without their proposal.

“We need to find something today that is politically viable,” she said.

In the meantime, Lesieutre said the BLM can only follow what Congress tells them to do.

“We do the best we possibly can,” she said. “We are often in conversations with leaders, talking about the facts and challenges, but at the end of the day, it’s in Congress’ hands.”