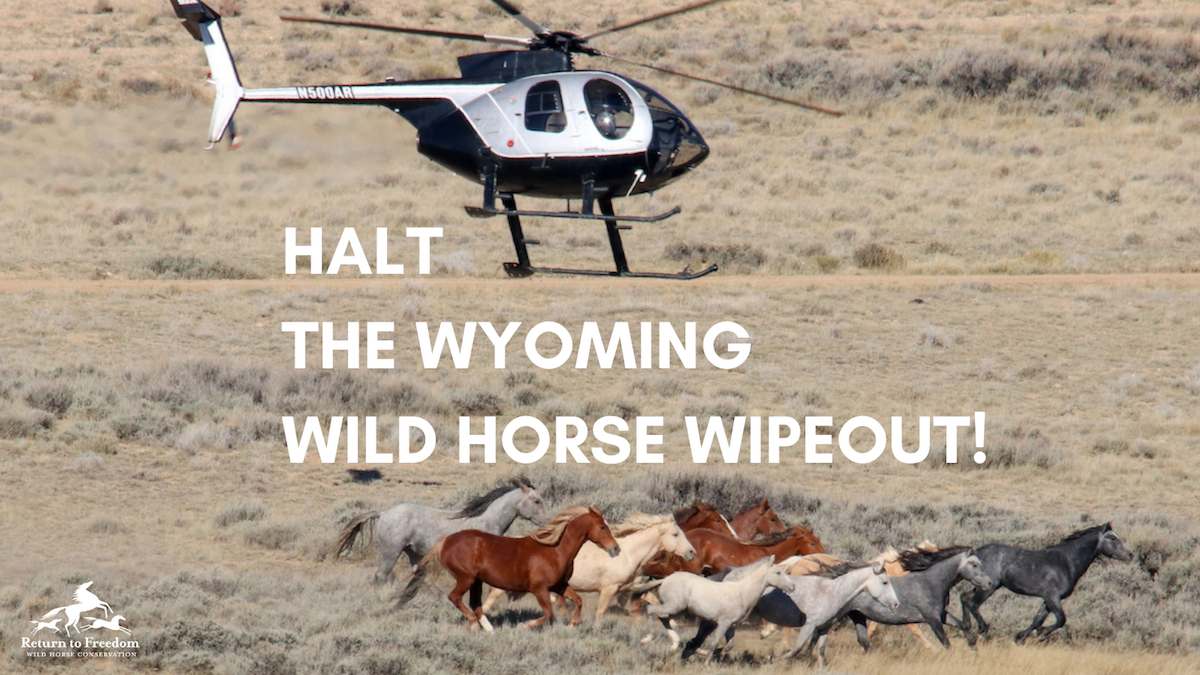 Return to Freedom on Friday slammed the Bureau of Land Management’s plan to zero-out two wild horse Herd Management Areas in southwest Wyoming, slash the herd population on a third and potentially use dangerous, painful and costly surgical sterilization of mares to restrict population growth.

“This is not only wrong — it’s illegal,” said Neda DeMayo, president of RTF. “The BLM is putting an agreement with ranchers in front of its responsibilities under the Wild and Free-Roaming Horses and Burros Act.

“Federally protected wild horse and burro populations on our public lands must not be allowed to be removed due to private landowner pressure or, soon, whole herds will vanish not just from Wyoming but across the West.”

Under the plan, the BLM would:

The BLM considered making the White Mountain HMA herd non-reproducing, but its preferred alternative in the final Environmental Impact Statement does note that “population growth suppression tools” including spaying and gelding, which RTF strongly opposes, may be used to limit population growth.

The BLM has not yet issued a final decision record, but it has already set the stage for the changes. Starting last October, the agency spent more than $1.1 million to capture and remove 3,502 wild horses from their southwest Wyoming home ranges during a three-month-long helicopter roundup in which 37 horses died.

The BLM says that it is amending a Resource Management Plan to comply with a 2013 consent decree that the agency entered into with the Rock Springs Grazing Association.

The ranching group sued for the removal of all of the wild horses from the 2-million-acre Checkerboard region, an unfenced area of alternating, one-mile-square blocks of public and private land set up in the 1860s as part of negotiations with the Union Pacific railroad.

BLM’s lone reason for its planned changes: creating a barrier between public and private lands is difficult.

“That’s not good enough for the agency charged with conserving wild horses on our public lands on behalf of all Americans,” DeMayo said. “Government agencies don’t get to throw up their hands just because Congress handed them a challenge.”

BLM’s plan demonstrates explicit bias. It considered only reallocating forage from wild horses to other wildlife or livestock without making an equivalent amount of forage available to wild horses elsewhere.

The BLM already allows up to 191,791 Animal Unit Months of private livestock grazing on allotments overlapping the Herd Management Areas to as few as 18,600 AUM for wild horses (one AUM is the amount of forage needed to sustain one cow-calf pair, one horse or five sheep for one month).

The BLM apparently did not consider land swaps or other possible solutions, like scaling up a program of safe, proven and humane fertility control, an effort that would help lead to stabilization and a decrease, where necessary, of wild horse populations, with fewer horses ending up in already overcrowded off-range holding facilities at great taxpayer expense.

The BLM’s plan would set a precedent that a special-interest association could demand the removal of wild horses from not just private but public lands. The courts have already ruled on this, however.

In 2016, the U.S. Court of Appeals for the 10thCircuit sided with RTF and other wild horse advocates, ruling that conducting a 2014 wild horse roundup on the Checkerboard without going through a full planning process violated both the Wild and Free-Roaming Horses and Burros Act and Federal Land Policy Management Act. The court ruled that the BLM lacked the authority to treat the entire Checkerboard as private land from which wild horses must be removed.

“Wild horses and burros continue to be given the smallest allocation of land and forage while being disproportionally blamed for range degradation,” she said. “It isn’t so much the number of wild horses or livestock that is the problem, it is how they are managed on these sensitive habitats.

“All grazing mammals tend to overgraze certain areas and under-graze others. In a balanced ecosystem, predators would keep grazers moving and this works best for the land. Climatic change doesn’t prefer one species over the other. To truly create sustainable and healthy rangelands, a new model of holistic land management must be implemented across the West.”