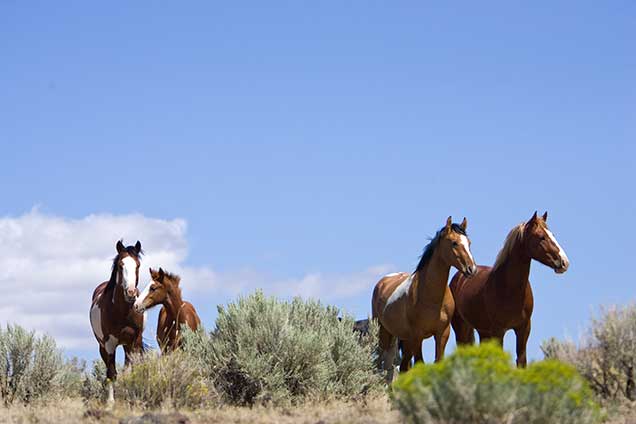 Wild horses from the South Steens Herd Management Area in Oregon. The Bureau of Land Management plans to perform sterilization surgeries on wild mares from the nearby Warm Springs HMA. BLM photo.

As published by Statesman Journal

The Bureau of Land Management aims to use a helicopter to capture wild horses in Central Oregon, then perform a rare surgery on 100 animals, in which a mare’s ovaries will be removed by crushing and pulling them out with a looped-chain instrument.

This study/experiment planned for this fall at the Warm Springs Herd Management Area, southwest of Burns, is part of a larger push by BLM and some members of Congress to make field sterilization surgeries a new way to reduce the number of wild horses and burros on federal land.

It’s a reckless move at taxpayer expense by the agency charged with protecting wild horses and burros that would be dangerous for individual animals while threatening the diversity and health of whole herds.

Known as ovariectomy via colpotomy, the procedure BLM plans to use in Oregon exposes mares – stressed by being taken from their herds and confined for the first time – to serious risk from infection, evisceration (should intestines protrude through the incision), and hemorrhaging.

Most domestic horses on which this surgery is performed in sterile conditions are hospitalized for three to seven days.

“The possibility that ovariectomy may be followed by prolonged bleeding or peritoneal infection makes it inadvisable for field application,” concluded a 2013 National Academy of Sciences report done as part of a $1 million report on wild-horse management funded by the BLM.

At the same time, Rep. Chris Stewart, R-Utah, authored an amendment to the Fiscal Year 2019 Interior Appropriations bill, approved by the House as part of a larger spending package, which would give Interior Secretary Ryan Zinke power to create non-reproducing herds with sterilization as a key tool.

Common sense tells us these surgeries are untenable on the range due to the risk posed to mares, including pregnant mares, and because the monetary cost will be unacceptably high.

This march toward endangering federally protected wild horses and burros is all the more unnecessary by the availability of the safe and effective fertility-control vaccine known as PZP.

Since 2007, BLM has never spent more than 3.94 percent of its annual Wild Horse and Burro Program budget on fertility-control vaccines, despite the Science and Conservation Center and organizations like Return to Freedom Wild Horse Conservation achieving a 91-98 percent efficacy rate when the vaccine is properly applied.

BLM’s failure to implement PZP has resulted in 46,431 captured wild horses and burros warehoused in government holding facilities. It cost taxpayers $47.5 million to house, feed and care for them in 2017.

As part of a multipronged approach, PZP is a tool that the public can accept.

It’s well past time that BLM work with advocates to forge a politically viable, long-term plan – one that is both humane and rooted in proven science – providing the sustainable future that wild horses and burros deserve.

Cory Golden is the advocacy and communications coordinator for Return to Freedom Wild Horse Conservation.