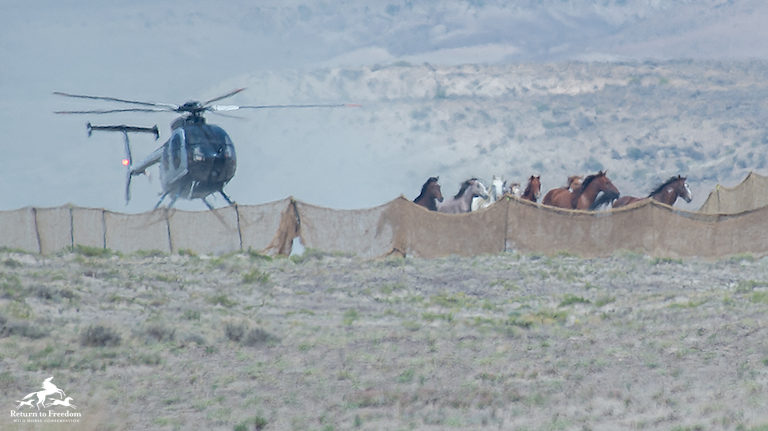 A contractor’s helicopter drives wild horses into the trap site on Sept 7. Photo by Meg Frederick.

The Bureau of Land Management on Sunday captured 17 wild horses on the 12th and final day of an “emergency” helicopter roundup on and around Colorado’s Sand Wash Basin Herd Management Area. No deaths were reported on Sunday.

On Saturday, 49 wild horses were released back onto the HMA: 25 mares treated with the safe, proven and humane fertility control vaccine PZP and 24 studs that were selected in cooperation with local volunteers on the Sand Wash Basin Advocacy Team. RTF strongly supports the use of fertility control to halt future roundups.

In addition, three other mares from Sand Wash Basin were transported to the Spring Herd Management Area in Southwest Colorado, where they were released to add genetic diversity to the herd.

A total of 684 wild horses were captured during the roundup. Two wild horses — one adult and one foal — were confirmed killed, euthanized for what BLM described as pre-existing conditions but which observers believe were injuries caused by the roundup. Emotions also ran high because citizens attending did not see enough diligence on the part of the agency in searching for missing foals and adult horses.

BLM had set out to removed 783 wild horses but cut short the roundup on the HMA under pressure from the public and elected officials.

Prior to the roundup, BLM estimated the number of wild horses on Sand Wash at about 896 wild horses. The BLM-set “Appropriate Management Level” for the 157,730-acre Herd Management Area is 163-363, or as low as one horse for every 968 acres.

The BLM’s justification for the roundup was the number of “excess” wild horses on the Herd Management Area. The roundup was prioritized then as an emergency because of a lack of forage, especially at lower evaluations, with winter coming, according to BLM.

BLM allows up to 19,758 Animal Unit Months of private cattle and sheep grazing on four allotments overlapping the Herd Management Area, or the equivalent of 1,647 cow-calf pairs annually. (One AUM equals monthly forage for one cow-calf pair, one horse or five sheep.) While wild horses are free-roaming all year long, seasons of use for livestock vary by allotment, with cattle use ranging from as low as two to as many as three months and sheep use ranging from as low as six to as many as eight months.

No cattle were grazed on the Herd Management Area in 2020-21, according to BLM, while 2,161 AUMs were allocated for sheep in 2020. Use varied by allotment with sheep allowed to graze as early as September and as late as May, according to planning documents.

In 2021, the trailing of sheep through the Herd Management Area has been the only livestock use, according to BLM.

Captured horses are to be transported to the BLM facility in Canon City for adoption or sale.

Last year, 300 mares on the Herd Management Area were treated with fertility control, in cooperation with advocates.

The roundup is part of a plan to remove 6,000 additional wild horses from the range because of drought conditions by the end of September.