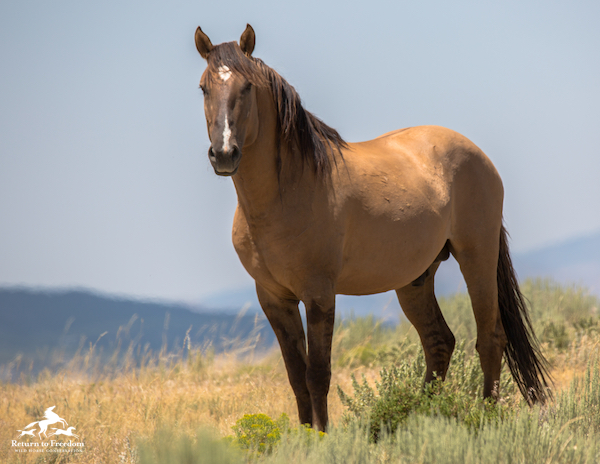 Photo of the stallion Mayday on the Sand Wash Basin Herd Management Areas by Meg Frederick. Mayday was one of 24 studs and 25 mares released back onto the basin following a roundup earlier this month.

Statement from RTF: Stone-Manning’s tasks will be many in rebuilding a BLM that has lacked strong, steady leadership, including within a Wild Horse and Burro Program that needs transformative change, away from decades of removing and warehousing of wild horses and toward humane, on-the-range management. Return to Freedom hopes that Stone-Manning will bring a holistic view of public lands to the position and looks forward to working with her to create a sustainable future for wild horses, burros and other wildlife and the rangelands upon which they depend.

As published by Montana Free Press

The U.S. Senate voted [50-45] Thursday to approve the nomination of Montanan Tracy Stone-Manning to lead the Bureau of Land Management. In that post, she’ll oversee management of 12% of the United States’ landmass.

Stone-Manning, of Missoula, previously served as an adviser to Sen. Jon Tester, D-Montana, and as director of the state Department of Environmental Quality under former Democratic Gov. Steve Bullock. After two years in that post, she became Bullock’s chief of staff. More recently, she’s advised the National Wildlife Federation on conservation policy.

Stone-Manning’s nomination was supported by Tester and opposed by his Republican counterpart in the Senate, Steve Daines, who sent a letter to president Joe Biden July 14 urging him to rescind her nomination. Ten Republicans on the Senate Committee on Energy and Natural Resources signed the letter, which centered on Stone-Manning’s role in an investigation into a tree-spiking incident on the Clearwater National Forest in 1989 that ultimately resulted in the indictment of four men.

After heated debate about that incident and discussion of Stone-Manning’s record on energy development, the energy committee arrived at a deadlock vote on her nomination July 22, with all 10 Republicans opposed and all 10Democrats in favor. Under Senate rules, that meant her nomination could advance before the full Senate. The nomination was in a holding pattern for several months while the Senate debated a $1 trillion infrastructure package and then broke for its August recess.

During remarks on her nomination Thursday, Sen. John Barassso, R-Wyoming, said Stone-Manning lied to the energy committee about her involvement in the tree-spiking incident.

Barassso called her a “dangerous choice to be put in charge of America’s public lands” and said her nomination was opposed by a long list of policy leaders and organizations, including two former BLM directors, logging groups, and sportsmen’s groups. He encouraged Democrats to break ranks and oppose her nomination.

“Each and every senator who votes to confirm her will be held personally responsible for that vote,” he said.

During his remarks, Tester said he welcomed responsibility for his vote. “Damn right — hold me accountable for Tracy Stone-Manning,” he said. “I’ve worked with her. I know what she does. I know she can get the job done. She can bring people together from all political ilks, and she can do what’s best for the American people, in this case with our public lands.”

The chairman of the energy committee, Sen. Joe Manchin, D-West Virginia, also spoke in support of the nomination. He said he looked carefully into allegations that she lied to the energy committee and examined records of the trial, but found no evidence that she spiked any trees or mischaracterized her role in the investigation of that crime.

The vote fell along party lines with all Democrats and two independents in favor, and 48 Republicans opposed. Republican Sens. John Cornyn of Texas and Rand Paul of Kentucky didn’t vote.

Though the tree-spiking incident has dominated senators’ discourse about Stone-Manning, many of the senators on the energy committee keyed in to her views on hot-botton energy and land management issues during their June 8 questioning, during which she fielded questions about her views on the Keystone XL pipeline, the Rock Creek Mine in northwestern Montana, and public land transfer.

The BLM manages 245 million acres of federal land and approximately 30% of the nation’s subsurface mineral estate. Stone-Manning’s new boss, Interior Secretary Deb Haaland, has called the federal oil and gas leasing system “fundamentally broken” and advocated a different approach that will give American taxpayers a “better return on their investment.”

As part of Biden’s climate change agenda, he signed an executive order directing the Interior Department, which oversees BLM, to pause federal oil and gas leasing while it conducts a review of the climate costs of the program. That review is ongoing. Meanwhile, the program’s future has been complicated by a series of lawsuits. Shortly after the leasing freeze was announced, 13 Republican attorneys general, including Montana’s Austin Knudsen, brought a lawsuit before the Western District of Louisiana challenging the president’s order. Judge Terry Doughty sided with the states in a June ruling granting a preliminary injunction. Doughty’s order directed the government to resume the federal leasing program, which the Interior Department recently did. The federal government’s appeal of Doughty’s ruling is pending.