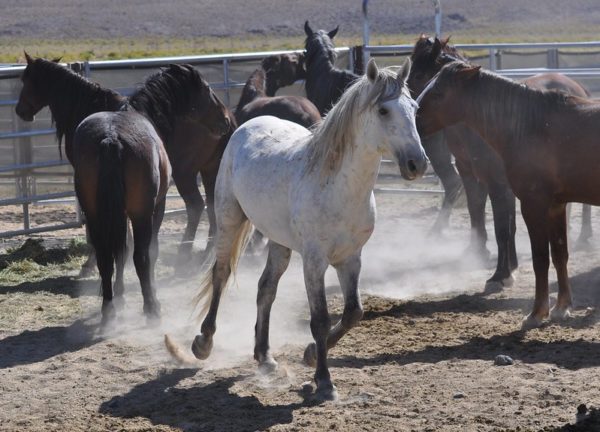 The Bureau of Land Management has captured a total of 239 wild horses in an “emergency” roundup of about 450 wild horses on the Stone Cabin Herd Management Area, located 28 miles east of Tonopah, Nev. The BLM is using temporary bait and water traps made of corral panels stocked with water and hay, not helicopters. The roundup was to begin on or around Aug. 19.

Eight wild horses have been killed, according to BLM’s gather reports: three after suffering broken necks, two after breaking legs and three from colic.

The purpose of the roundup is to remove “drought-impacted and compromised wild horses within and outside” the Herd Management Area. According to the agency, there is “limited availability to water and forage” due to drought.

BLM says that the average body condition score of the wild horses there is 3 (thin) with many 2 (very thin) and some 1 (poor) on a 9-point scale. BLM attached a photograph of emaciated horses that it says was taken in July to the press release (caution: disturbing image).

“Several springs are available to sustain minimal water needs, but with no forage, the condition of the horses is expected to continue to decline and lead to widespread suffering and death through the remaining summer months,” BLM said in the press release.

The 407,700-acres Stone Cabin Herd Management Area has an agency-set “Appropriate Management Level” of 218-364, or as low as one horse for every 1,870 acres. As of July, the estimated population was 1,037 wild horses, including foals.

Two livestock permittees who have allotments overlapping the Herd Management Area removed livestock in May due to the absence of forage and drought conditions, according to BLM. One of the two reduced cattle numbers by 45 percent this year, according to BLM, while the other has yet to submit final billing numbers.

Ordinarily, the two permittees would be allocated up to 13,864 Animal Unit Months of forage or the year-round equivalent of 1,155 cow-calf pairs. One AUM is the equivalent of one month’s forage for a cow-calf pair, one horse or five sheep.

In 2016, 292 wild horses were captured on the Stone Cabin Herd Management Area. A total of 171 were returned to the range, according to BLM. About 100-110 mares were to receive PZP-22 fertility control treatments. How many were actually treated at that time is unclear. BLM did not follow up with planned subsequent treatments over the years that followed because the district prioritized other Herd Management Areas.

In 2012, BLM treated 98 mares with fertility control on the HMA, according to a press report.

Wild horses captured during the 2021 roundup will be transported to the Sutherland Off Range Corrals in Sutherland, Utah, where they will be for adoption or sale.

The roundup is part of a plan to remove 6,000 additional wild horses across the West because of drought conditions by the end of September.