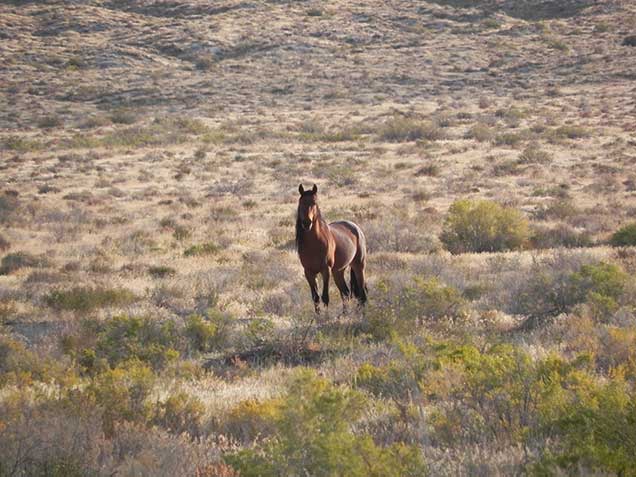 A wild horse is shown on the Fox Hog Herd Management Area, part of the Surprise Complex, in this undated BLM photo.

The Bureau of Land Management on Thursday released 61 wild horses, including 32 mares treated with fertility control, on the 17th and final day of a helicopter roundup on the Surprise Complex of Herd Management Areas in Washoe and Humboldt Counties in Nevada.

A 3-year-old wild horse “born with crooked knees leading to enlarged ankles – very lame,” was put down, according to BLM’s gather report

A total of 156 wild horses have been re-released, according to daily reports, which differs from the total of 158 released mentioned elsewhere on BLM’s gather page. A BLM spokesman said Friday that he would look into the discrepancy and update the page.

In addition to those released on Thursday, 13 stallions were released on Oct. 9, 66 horses (34 mares treated with fertility control and 32 studs) on Oct. 5, one stallion on Oct. 3, and 15 stallions on Sept. 30, according to the report.

The BLM set out to capture 1,220 wild horses and permanently remove 1,050 from the Surprise Complex. The agency said it might “release up to 170 animals back to the Herd Management Areas, if needed, to maintain viable populations,” the agency said in a press release before the roundup.

The 397,000 Surprise Complex is made up of six Herd Management Areas. Based on a June 2019 aerial survey, the BLM estimates there were about 1,300 wild horses on the six HMAs prior to the roundup compared to a total agency-set “Appropriate Management Level” of 283-496.

By comparison, BLM allows seven livestock operators to use up to 30,587 Animal Unit Months, the equivalent of 2,549 cow-calif pairs annually, for seasonal livestock grazing on allotments overlapping the HMAs. One AUM is the amount of forage needed to sustain one cow-calf pair, one horse, five sheep or five goats for a month.

BLM also planned to remove about 10 wild burros because the HMA plans do not provide for burro populations, according to the release, but no burros were captured.

Captured horses will be transferred to the BLM’s Litchfield Wild Horse and Burro Corrals near Susanville, Calif., “and potentially other holding facilities,” to be prepared for adoption or sale, according to the release. On Oct. 12, the BLM announced the corrals would be closed to the public during a possible outbreak of pigeon fever among wild horses captured on the Surprise Complex.

The Surprise Complex is made up of the Massacre Lakes, Bitner, Nut Mountain, Wall Canyon, High Rock and Fox Hog Herd Management Areas.

Those who wish to view the roundup should reserve a spot by calling BLM Public Affairs Officer Jeff Fontana at 530-260-0189. Each viewing site can accommodate no more than 10 visitors. In accordance with protocols to prevent the spread of COVID-19, visitors will be asked to maintain social distancing and to wear face masks where distancing is not possible. On most days, members of the public will meet at 6 a.m. at the Rabbit Traxx gas station and mini mart, 580 Patterson St. (intersection of Patterson and California Route 299) in Cedarville, Calif.

Visitors must provide their own transportation in a high-clearance, four-wheel-drive vehicle. They should be sure vehicle tires are sound. They must have a good spare tire and tire changing equipment. Visitors should be prepared for a full day in changing weather conditions ranging from cold mornings to hot afternoons. They should bring plenty of water and food.

There is no shade or restroom facilities at the viewing sites.  Most sites will have no cell service.  Travel time to some capture sites is over two hours each way on dirt and gravel roads.