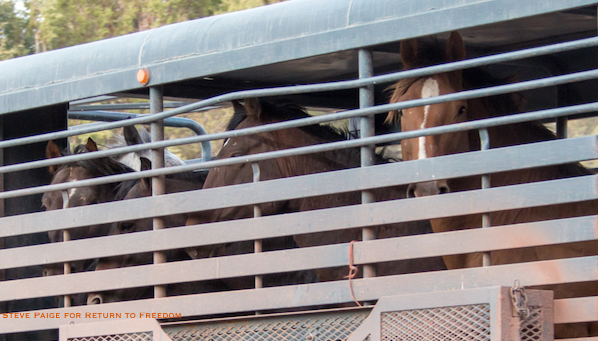 The U.S. Forest Service on Tuesday captured 19 more wild horses during the ongoing helicopter roundup at the Devils Garden Plateau Wild Horse Territory in Northern California, bringing the total number of wild horses captured to 872. No injuries were reported.

Fourteen wild horses have died during the course of the roundup, including seven euthanized since Oct. 24 for showing symptoms of pigeon fever “to protect the herd.” It’s unusual to euthanize a horse for the bacterial infection under normal circumstances (click here to read more about pigeon fever). The Forest Service has provided no information about whether the wild horses suffered from complications or if any steps were taken to separate or treat the affected animals, saying only that less than 1% of captured wild horses have shown symptoms.

The agency has also provided little detail about other deaths. Four other adult horses have been put down for “chronic preexisting conditions” and two from acute injuries, which are typically defined as injuries suffered during capture or in holding corrals. One foal also “died in holding,” according to the agency. Two mares have also miscarried.

Return to Freedom has joined a coalition of national and local advocates that filed a lawsuit to stop a planned unrestricted sale of wild horses from Devils Garden, which would place hundreds on animals in jeopardy of being sold to slaughter. The case is pending.

The Forest Service’s plans have drawn opposition from wild horse and animal welfare advocates, including Return to Freedom, and demands from Sen. Dianne Feinstein, D-Calif., to explain how the Forest Service intends to keep captured wild horses from going to slaughter against the wishes of Congress and the public.

The remaining 700 or so younger horses, ages 9-younger, will be transported to Bureau of Land Management holding corrals in Susanville, Calif., where they will be offered for adoption over the next year. Speaking before the National Wild Horse and Burro Advisory Board last month, a Forest Service official said that the agency had not made arrangements for the younger horses to be moved to a long-term BLM pasture after the year ends, meaning that they too could be vulnerable to sale to kill buyers.

The Forest Service says it is conducting the roundup “to help address impacts on aquatic resources, wildlife, grazing and traditional cultural practices.” “Reducing the population will allow range and riparian ecological conditions to recover, while also supporting wild horse herd health by reducing competition for limited food, water and habitat,” the Forest Service wrote in a press release.

The Forest Service has announced plans to hold a wild horse adoption and sale event on Nov. 16-17 at the Double Devil Corrals at Modoc National Forest near Alturas, Calif. The event will run from 10 a.m.-3 p.m. on both days. Horses ages 10-older will first be available first to adopters based on the order in which they’ve applied, then to buyers for restricted sale in the order in which they applied.

Sale restrictions include the ability to provide an adequate home and transportation as well as a prohibition against selling horses for slaughter.

The Forest Service will retain the title on adopted wild horses for one year, meaning that horses can be returned at any time during that year. Those that purchase wild horses will receive their horse’s title immediately.

As of Oct. 31, more than 200 older wild horses had been captured, including pregnant mares, according to the Forest Service. Horses available for adoption / sale will have had their vaccinations and Coggins testing by the time of the event.

The Forest Service plans to geld all of the older stallions on or around Nov. 12, unless adopters or buyers make arrangements to take intact mature stallions.

Older mares with foals are being transported to the BLM’s Litchfield corrals in Susanville, Calif., where they will be offered for adoption — along with captured wild horses ages 9 and under — beginning in early to mid-December. Details on those adoptions have not yet been announced.

For more information, including adoption and sale forms and links to photos of captured wild horses, see https://bit.ly/2yJT4xI

Return to Freedom is already making preparations for the rescue of older horses. Should the U.S. Forest Service go forward with their disastrous plan to lift all restrictions on sales of an estimated 300 wild horses ages 10-older from Devils Garden Wild Horse Territory, this puts them in jeopardy of being purchased by kill buyers. To donate to Return to Freedom’s Wild Horse Defense Fund for the Devils Garden response effort: