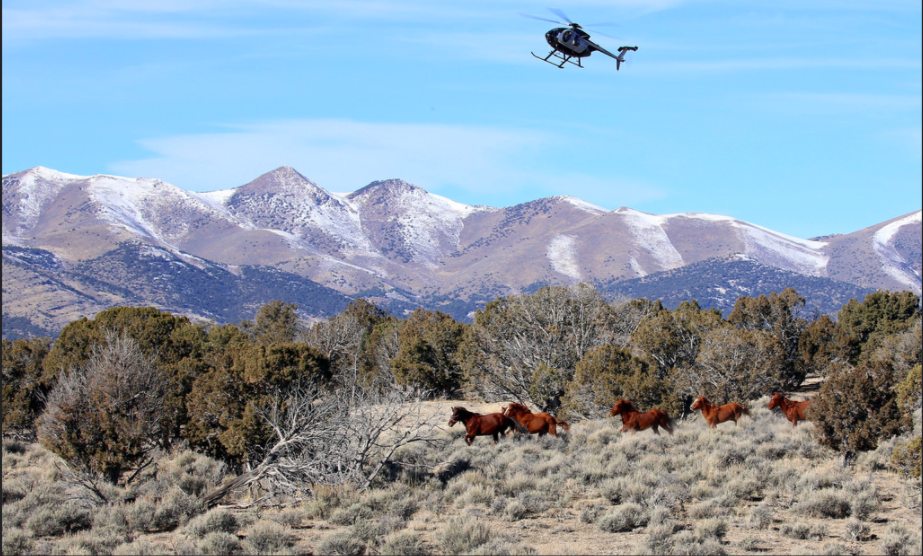 A helicopter pursues wild horses during a 2018 roundup on the Triple B Complex. BLM photo.

The Bureau of Land Management recently ended a helicopter roundup on the Triple B Complex, located in Elko and White Pine counties in Nevada, having captured 1,897 wild horses while killing 23. The roundup stretched from July 27-Aug. 25.

Of the 23 wild horses killed, 17 were put down for what BLM described as pre-existing or chronic conditions that included lameness or missing an eye. The others died “sudden / acute” deaths that included three deaths from broken necks, according to BLM’s gather report.

The BLM set out to capture up to 1,900 wild horses from the Triple B Complex to reduce the herd population to about 1,675 wild horses, not counting this year’s foals. The agency’s stated reason for removing wild horses from their home range is a need to reduce “overpopulation within and outside the complex, where there currently is not enough water and / or forage to support to the number of horses in the area.”

The Triple B Complex includes the Triple B, Maverick Medicine and Antelope Valley Herd Management Areas. It is made up of about 1.6 million acres of public and private land and has a combined agency-set “Appropriate Management Level” of 482 to 821 wild horses, or as low as one horse for every 3,320 acres.

By comparison, as of 2017, when BLM completed its most recent Environmental Assessment for the complex, as many as 87,226 Animal Unit Months were permitted on the Triple B Complex for seasonal and some year-round grazing of privately owned cattle and sheep. That’s the equivalent of 7,269 cow-calf pairs, though actual use numbers have been lower in recent years. An AUM is defined as a month’s forage for one horse, one cow-calf pair or five sheep.

As part of the roundup, the BLM planned to treat up to 100 mares with the fertility control vaccine GonaCon, then release them. That number has since been reduced to “up to 50,” according to a press release. Fifty stallions will also be released.

Return to Freedom strongly supports the use of reversible fertility control as a tool to halt roundups by slowing (not stopping) herd growth, but treating about 6 percent of the remaining mares will not make an appreciable difference in reducing the size or frequency of future roundups.

In July 2019, 802 wild horses were captured and 12 died during a roundup on the Triple B Complex, according to BLM. The agency opted not to administer any fertility control, which could have reduced the size and frequency of future roundups.

Wild horses captured during the current roundup are to be shipped to the Indian Lakes Off-Range Wild Horse and Burro Corral, in Fallon, Nevada, and Sutherland (Utah) Off-Range Corrals, in Sutherland, Utah, to be prepared for adoption or sale.