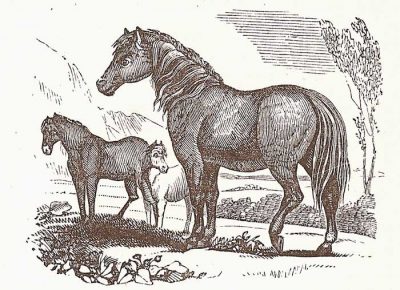 The Galloway Pony is an extinct horse breed, once native to Scotland and northern England. It was said to have “good looks, a wide, deep chest and a tendency to pace rather than trot.” In the 18th century, Galloways were bred in Swaledale to haul lead ore.

It was a well-known type of pony, noted in English literature when Shakespeare referred to “Galloway nags” in Henry IV, Part 2. A survey in 1814 stated:

The province of Galloway formerly possessed a breed of horses peculiar to itself, which were in high estimation for the saddle, being, though of a small size, exceedingly hardy and active. They were larger than the ponies of Wales, and the north of Scotland, and rose from twelve to fourteen hands in height. The soils of Galloway, in their unimproved state, are evidently adapted for rearing such a breed of horses; and in the moors and mountainous part of the country, a few of the native breed are still to be found. … This ancient race is almost lost, since farmers found it necessary to breed horses of greater weight, and better adapted to the draught. But such as have a considerable portion of the old blood, are easily distinguished, by their smallness of head and neck, and cleanness of bone. They are generally of a light bay or brown colour, and their legs black. The name of Galloway is sometimes given to horses of an intermediate size between the poney and the full-sized horse, whatever may be the breed.

The Galloway pony heavily influenced the Newfoundland pony, the Highland Pony, and the Fell pony of England. It died out through crossbreeding because its crossbred progeny were such useful animals, much like the Narragansett Pacer breed of Rhode Island. 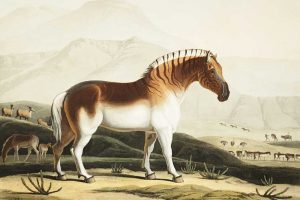 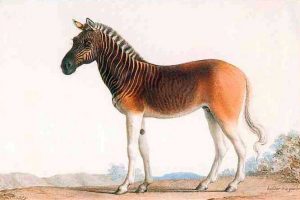 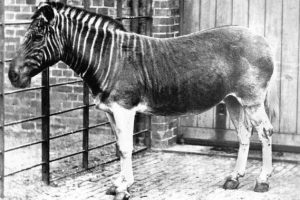 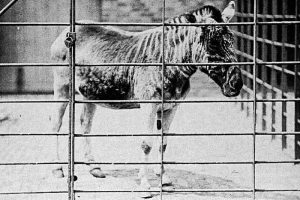 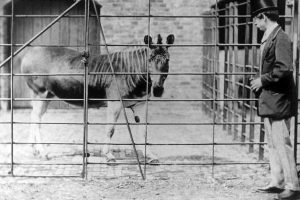 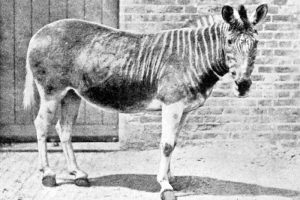 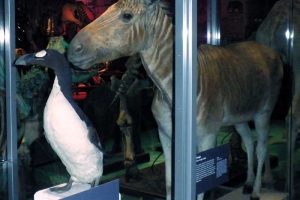 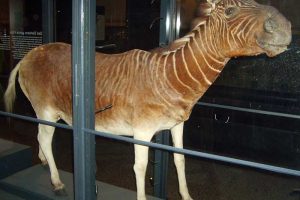 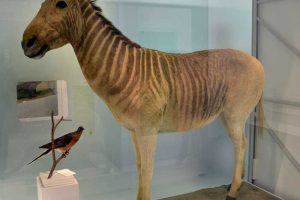 The quagga (Equus quagga quagga) is an extinct subspecies of plains zebra that lived in South Africa until the 19th century. It was long thought to be a distinct species, but genetic studies have shown it to be the southernmost subspecies of plains zebra. It is considered particularly close to Burchell’s zebra. Its name is derived from its call, which sounds like “kwa-ha-ha”.

The quagga is believed to have been around 257 cm (8 ft 5 in) long and 125–135 cm (4 ft 1 in–4 ft 5 in) tall at the shoulder. It was distinguished from other zebras by its limited pattern of primarily brown and white stripes, mainly on the front part of the body. The rear was brown and without stripes, and therefore more horse-like. The distribution of stripes varied considerably between individuals. Little is known about the quagga’s behavior, but it may have gathered into herds of 30–50 individuals. Quaggas were said to be wild and lively, yet were also considered more docile than Burchell’s zebra. They were once found in great numbers in the Karoo of Cape Province and the southern part of the Orange Free State in South Africa.

After the Dutch settlement of South Africa began, the quagga was heavily hunted as it competed with domesticated animals for forage. While some individuals were taken to zoos in Europe, breeding programs were unsuccessful. The last wild population lived in the Orange Free State, and the quagga was extinct in the wild by 1878. The last captive specimen died in Amsterdam on 12 August 1883. Only one quagga was ever photographed alive and only 23 skins are preserved today. In 1984, the quagga was the first extinct animal to have its DNA analyzed, and the Quagga Project is trying to recreate the phenotype of hair coat pattern and related characteristics by selectively breeding Burchell’s zebras.

CLICK HERE TO LEARN MORE ABOUT THE QUAGGA (Wikipedia)

Learn More About the Quagga 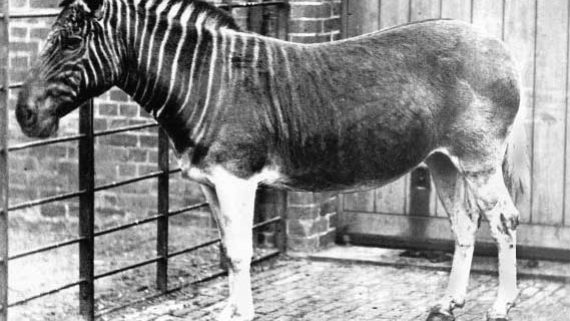 Quagga: Can an Extinct Animal be Bred Back into Existence?
June 14, 2016

In South Africa, conservationists are attempting to restore the quagga, a type of zebra notable for its unusual coloration and striping patterns. There’s one major issue: the quagga has been … END_OF_DOCUMENT_TOKEN_TO_BE_REPLACED 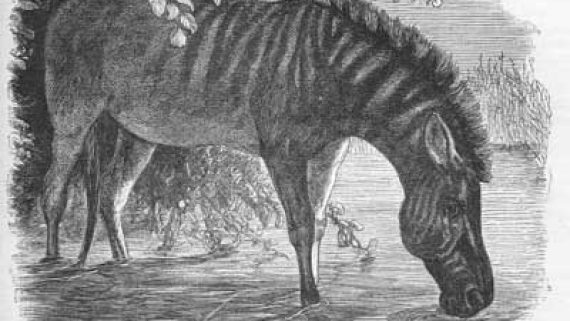 The Quagga was a close relative of horses and zebras. It was a yellowish-brown zebra with stripes only on its head, neck and shoulders and with pale legs. The quagga … END_OF_DOCUMENT_TOKEN_TO_BE_REPLACED 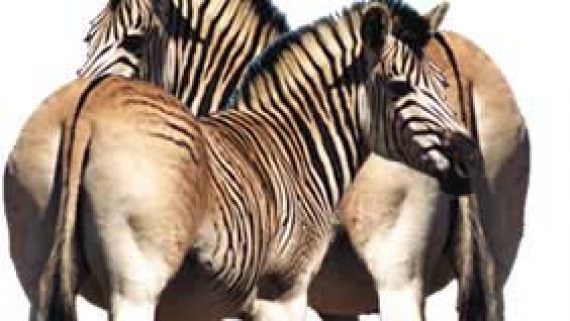 DNA analysis has shown that the Quagga was not a separate species of zebra but in fact a subspecies of the Plains Zebra (Equus Quagga) The Quagga, formerly inhabited the … END_OF_DOCUMENT_TOKEN_TO_BE_REPLACED

The Hagerman horse (Equus simplicidens), also called the Hagerman zebra or the American zebra, was a North American species of equid from the Pliocene epoch and the Pleistocene epoch. It was one of the oldest horses of the genus Equus and was discovered in 1928 in Hagerman, Idaho. It is the state fossil of Idaho. 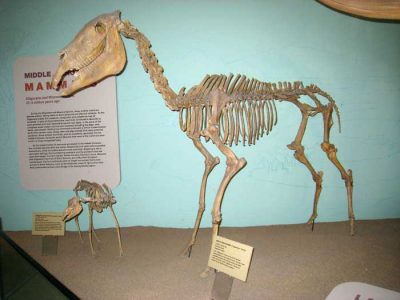 Classification
The Hagerman horse was given the scientific name of Plesippus shoshonensis in 1930 by a Smithsonian paleontologist named James W. Gidley who led the initial excavations at Hagerman that same year.

However, further study by other paleontologists determined that fossils closely resembled fossils of a primitive horse from Texas named Equus simplicidens, named by paleontologist Edward Drinker Cope in 1892. Because of this similarity, the two forms were interpreted to be the same species, and since the name Equus simplicidens was the older name, it was retained following the taxonomic Principle of Priority. The Hagerman fossils represent some of the oldest widely accepted remains of the genus Equus.

Discovery
A cattle rancher named Elmer Cook discovered some fossil bones on this land in Hagerman, Idaho. In 1928, he showed them to Dr. H. T. Stearns of the U.S. Geological Survey who then passed them on to Dr. James W. Gidley at the Smithsonian Institution. Identified as bones belonging to an extinct horse, the area where the fossils were discovered, called the Hagerman Horse Quarry, was excavated and three tons of specimens were sent back to the Smithsonian in Washington, D.C.

Excavation of the fossils continued into the early 1930s. The Hagerman Horse Quarry floor grew to 5,000 square feet (460 m2) with a backwall 45 feet (14 m) high. Ultimately, five nearly complete skeletons, more than 100 skulls, and forty-eight lower jaws as well as numerous isolated bones were found. Some paleontologists believed that such a large amount of fossils found in one location was because of the quarry area being a watering hole at one point. The waterhole could have been where the bones of the Hagerman horses accumulated as injured, old, and ill animals, drawn to water, died there. Other paleontologists think that an entire herd of these animals drowned attempting to ford a flooded river and were swept away in the current and ended up buried in the soft sand at the bottom.

Overview
The Hagerman horse first appeared about 3.5 million years ago. It was approximately 110-145 centimeters (43 to 57 inches) tall at the shoulder. It weighed between 110 and 385 kilograms (385 to 847 pounds). An average Hagerman horse was about the same size as an Arabian horse. It also was relatively stocky with a straight shoulder and thick neck, like a zebra, and a short, narrow, donkey-like skull.

The horse probably lived in grasslands and floodplains, which is what Hagerman was like 4-3 million years ago. Native North American horses became extinct about 10,000 years ago, at the same time as many other large-bodied species of the period.

The Syrian wild ass (Equus hemionus hemippus), less commonly known as a hemippe, is an extinct subspecies of onager native to the Arabian peninsula. It ranged across present-day Syria, Israel, Jordan, Saudi Arabia, and Iraq. 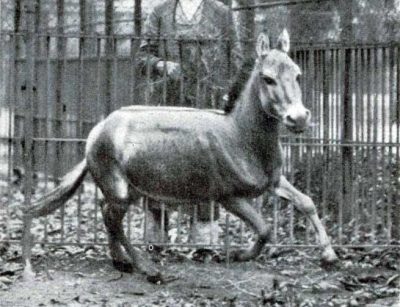 Description
The Syrian wild ass, only one metre high at its shoulder, was the smallest form of Equidae and could not be domesticated. Its coloring changed with the seasons — a tawny olive coat for the summer months and pale sandy yellow for the winter. It was known, like other onagers, to be untameable, and was compared to a thoroughbred horse for its beauty and strength.

Diet
The Syrian wild ass was a grazer. It fed on grass, herbs, leaves, shrubs, and tree branches.

History
European travelers in the Middle East during the 15th and 16th centuries reported seeing large herds. However, its numbers began to drop precipitously during the 18th and 19th centuries due to overhunting, and its existence was further imperiled by the regional upheaval of World War I. The last known wild specimen was fatally shot in 1927 et al. Ghams near the Azraq oasis in Jordan, and the last captive specimen died the same year at the Tiergarten Schönbrunn, in Vienna. 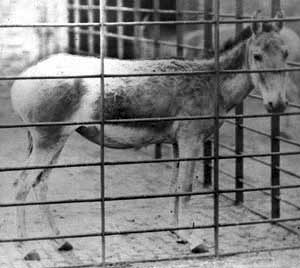 Restoration
After the extinction of the Syrian wild ass, the Persian onager from Iran was chosen as the appropriate subspecies to replace the extinct onagers in the Middle East. The Persian onager was then introduced to the protected areas of Saudi Arabia and Jordan. It was also reintroduced, along with the Turkmenian kulan, to Israel, where they both reproduce wild ass hybrids in the Negev Mountains and the Yotvata Hai-Bar Nature Reserve.

The tarpan (Equus ferus ferus), also known as Eurasian wild horse, is an extinct subspecies of wild horse. The last individual believed to be of this subspecies died in captivity in Russia in 1909, although some sources claim that it was not a genuine wild horse due to its resemblance to domesticated horses. 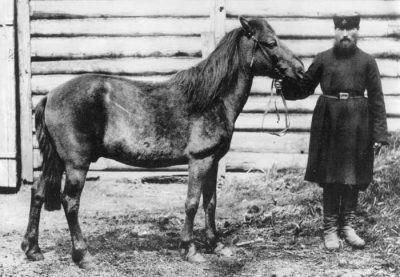 Beginning in the 1930s, several attempts were made to develop horses that looked like tarpans through selective breeding, called “breeding back” by advocates. The breeds that resulted included the Heck horse, the Hegardt or Stroebel’s horse, and a derivation of the Konik breed, all of which have a primitive appearance, particularly in having the grullo coat color. Some of these horses are now commercially promoted as “tarpans.” However, those who study the history of the ancient wild horse assert that the word “tarpan” only describes the true wild horse.

Appearance
Traditionally, two tarpan subtypes have been proposed, the forest tarpan and steppe tarpan, although there seem to be only minor differences in type. The general view is that there was only one subspecies, the tarpan, Equus ferus ferus. The last individual, which died in captivity in 1909, was between 140 and 145 centimetres (55 and 57 in) tall at the shoulders, had a thick falling mane, a grullo coat color, dark legs, and primitive markings, including a dorsal stripe and shoulder stripes.