Numerous wildlife species share their habitats with wild horses and burros. Here we feature just a few of those extended family members.

The ecoregions and ecology found in the Western United States are extremely varied. For instance, large areas of land are made up of everything from sand dunes in the Central Basin and Range ecoregion, which makes up much of the State of Nevada, to the ecology of the North Cascades in Washington State, which has the largest concentration of active alpine glaciers in the Lower 48s. The densely forested areas found in Northern California, Oregon, Washington, Idaho, and Montana have mostly species adapted to living in temperate climates, while Southern California, Nevada, Arizona, southern Utah, and New Mexico have a fauna resembling its position in the dry deserts with temperature extremes. 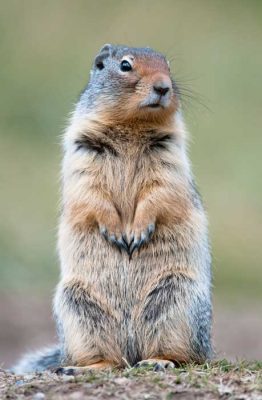 The western continental coast of the U.S., just as the East Coast, varies from a colder-to-warmer climate from north to south. Few species live thoughout the entire West Coast; however, there are some, including the American Bald Eagle that inhabits both the Alaskan Aleutian Islands and the California Channel Islands. In most of the contagious Western U.S. are mule deer, white-tailed antelope squirrels, cougars, American badgers, coyotes, hawks, and several species of snakes and lizards are common.

While the American black bear lives throughout the U.S., the brown bears and grizzly bears are more common in the northwest and in Alaska. In the dry, inland desert areas of states such as California, Nevada, Arizona, and New Mexico there are some of the world’s most venomous lizards, snakes, and scorpions. The most notorious might be the Gila monster and Mohave rattlesnake, both found in deserts in the Southwest.

The Sonoran Desert has eleven species of rattlesnakes — more than anywhere else in the world. Along the southwestern border there are jaguars and ocelots. The kit fox lives throughout Arizona, New Mexico, and Utah, while the gray fox occurs throughout the Western U.S.

The raccoon and spotted skunk occur throughout the Western U.S., while the ring-tailed cat occurs throughout Arizona, New Mexico, Western Texas, Utah, Colorado, and most of California. The American black bear occurs in most western states, including Washington, Oregon, California, Arizona, and Colorado. 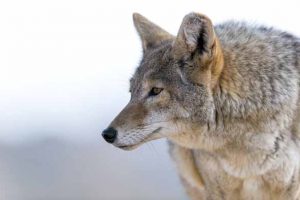 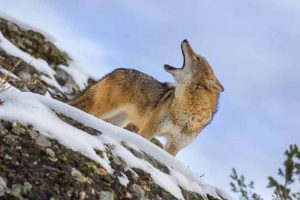 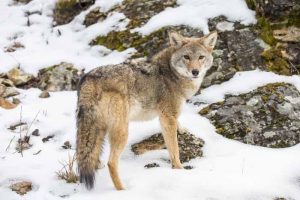 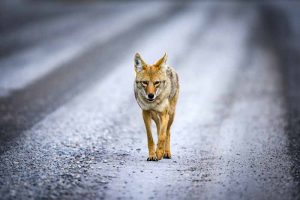 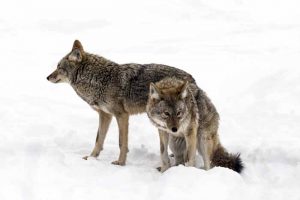 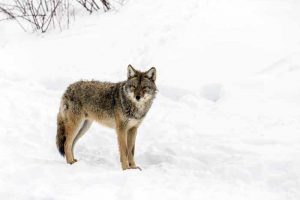 The coyote (Canis latrans) is a canine native to Central and North America. It is smaller than its close relative, the gray wolf, and slightly smaller than its other close relatives, the eastern wolf and the red wolf, being roughly the North American equivalent to the Old World golden jackal, though it is larger and more predatory. It is listed as least concern by the International Union for Conservation of Nature (IUCN), due to its wide distribution and abundance throughout North America, southwards through Mexico and into Central America. The species is versatile and able to adapt to environments modified by humans. As human activity has altered the landscape, the coyote’s range has expanded. As of 2005, 19 coyote subspecies are recognized.

The coyote is a prominent character in Native American folklore, mainly in the Southwestern United States and Mexico, usually depicted as a trickster that alternately assumes the form of an actual coyote or a man. As with other trickster figures, the coyote uses deception and humor to rebel against social conventions. The animal was especially respected in Mesoamerican cosmology as a symbol of military might. After the European colonization of the Americas, it was reviled in Anglo-American culture as a cowardly and untrustworthy animal. Unlike wolves (gray, eastern, or red), which have undergone an improvement of their public image, attitudes towards the coyote remain largely negative.

The pronghorn is indigenous to North America 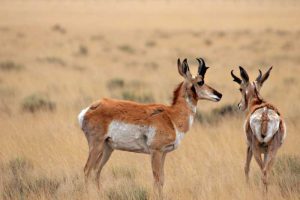 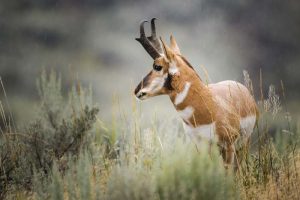 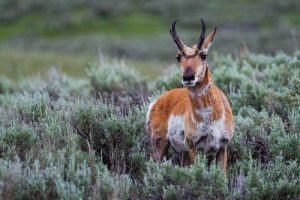 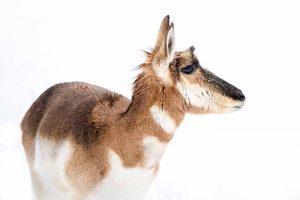 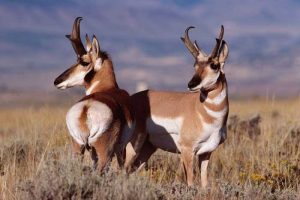 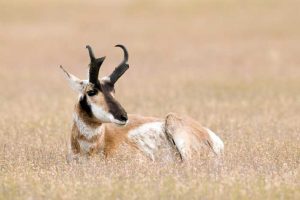 Of all the animals we have seen, the Antelope seems to possess the most wonderful fleetness. Shy and timorous, they generally repose only on the ridges, which command a view of all the approaches of an enemy … When they first see the hunters they run with great velocity … —Lewis and Clark

The pronghorn (Antilocapra americana) is a species of artiodactyl mammal indigenous to interior western and central North America. Though not an antelope, it is often known colloquially in North America as the American antelope, prong buck, pronghorn antelope, or simply antelope because it closely resembles the true antelopes of the Old World and fills a similar ecological niche due to parallel evolution.

It is the only surviving member of the family Antilocapridae. During the Pleistocene period, about 12 antilocaprid species existed in North America. Three other genera (Capromeryx, Stockoceros, and Tetrameryx) existed when humans entered North America, but are now extinct.

As a member of the superfamily Giraffoidea, the pronghorn’s closest living relatives are the giraffes and okapi. The Giraffoidea are, in turn, members of the infraorder Pecora, making pronghorns more distant relatives of the Cervidae (deer) and Bovidae (cattle, goats, sheep, and antelopes), among others. 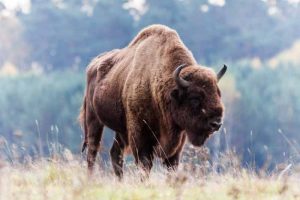 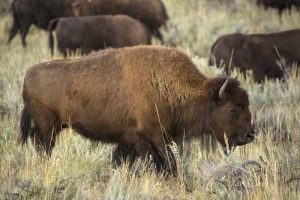 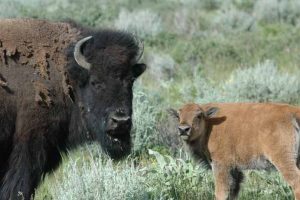 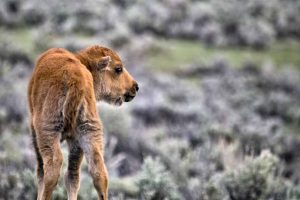 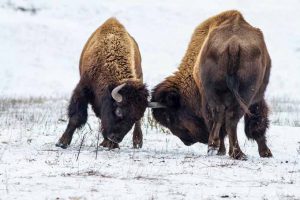 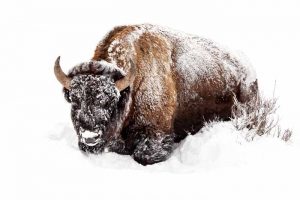 Bison are large, even-toed ungulates in the genus Bison within the subfamily Bovinae. Two extant and four extinct species are recognized. Of the four extinct species, three were North American: Bison antiquus, B. latifrons, and B. occidentalis. The fourth, B. priscus, ranged across steppe environments from Western Europe, through Central Asia, East Asia including Japan, and onto North America.

Of the two surviving species, the American bison, B. bison, found only in North America, is the more numerous. Although sometimes referred to historically as a “buffalo”, it is only distantly related to the true buffalo. The North American species is composed of two subspecies, the plains bison, B. b. bison, and the wood bison, B. b. athabascae, which is the namesake of Wood Buffalo National Park in Canada. The European bison, B. bonasus, or wisent, is found in Europe and the Caucasus, reintroduced after being extinct in the wild.