The horse family Equidae and the genus Equus evolved in North America. Fossil evidence dating to the Eocene Studies using ancient DNA, as well as DNA of recent individuals, shows there once were two closely related horse species in North America, the wild horse (Equus ferus), and Equus francisci or "New World stilt-legged horse" (taxonomically assigned to various names). Horses existed in Canada as recently as 12,000 years ago, and a 1992 study produced evidence that horses existed in the Americas until 8,000–10,000 years ago.

A long and adaptive story of survival 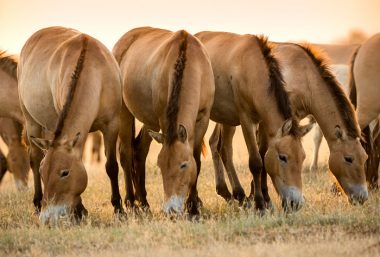 Today, the only extant true “wild horse” is the Przewalski’s horse, native to Mongolia. The genus Equus in North America died out at the end of the last ice age, possibly due to a changing climate or the impact of newly arrived human hunters. Thus, at the beginning of the Columbian Exchange, there were no equids in the Americas at all.

Return 1493–1600
Horses first returned to the Americas with the conquistadors, beginning with Columbus, who imported horses from Spain to the West Indies on his second voyage in 1493. Domesticated horses came to the mainland with the arrival of Cortés in 1519. By 1525, Cortés had imported enough horses to create a nucleus of horse-breeding in Mexico.

One hypothesis held that horse populations north of Mexico originated in the mid-1500s with the expeditions of Narváez, de Soto or Coronado, but it has been refuted. Horse breeding in sufficient numbers to establish a self-sustaining population developed in what today is the southwestern United States starting in 1598 when Juan de Oñate founded Santa Fe de Nuevo México. From 75 horses in his original expedition, he expanded his herd to 800, and from there the horse population increased rapidly.

While the Spanish also brought horses to Florida in the 16th century, the Choctaw and Chickasaw horses of what is now the southeastern United States are believed to be descended from western mustangs that moved east, and thus Spanish horses in Florida did not influence the mustang.

17th and 18th century dispersal
Native American people readily integrated use of the horse into their cultures. They quickly adopted the horse as a primary means of transportation. Horses replaced the dog as a travois puller and greatly improved success in battles, trade, and hunts, particularly bison hunts.

Santa Fe became a major trading center in the 1600s. Although Spanish laws prohibited Native Americans from riding horses, the Spanish used Native people as servants, and some were tasked to care for livestock, thus learning horse-handling skills. Oñates’ colonists also lost many of their horses. Some wandered off because the Spanish generally did not keep them in fenced enclosures, and Native people in the area captured some of these estrays. Other horses were traded by Oñates’ settlers for food, women, or other goods. Initially, horses obtained by Native people were simply eaten, along with any cattle who were captured or stolen. But as individuals with horse-handling skills fled Spanish control, sometimes with a few trained horses, the local tribes began using horses for riding and as pack animals. By 1659, settlements reported being raided for horses, and in the 1660s the “Apache” were trading human captives for horses. The Pueblo Revolt of 1680 also resulted in large numbers of horses coming into the hands of Native people, the largest one-time influx in history.

From the Pueblo people, horses were traded to the Apache, Navajo, and Utes. The Comanche acquired horses and provided them to the Shoshone. The Eastern Shoshone and Southern Utes became traders who distributed horses and horse culture from New Mexico to the northern plains. West of the Continental Divide, horses distribution moved north quite rapidly along the western slopes of the Rocky Mountains, skirting desert regions such as the Great Basin and the western Colorado Plateau. Horses reached what today is southern Idaho by 1690. The Northern Shoshone people in the Snake River valley had horses in 1700. By 1730, they reached the Columbia Basin and were east of the Continental divide in the northern Great Plains. The Blackfeet people of Alberta had horses by 1750. The Nez Perce people in particular became master horse breeders and developed one of the first distinctly American breeds, the Appaloosa. Most other tribes did not practice extensive amounts of selective breeding, though they sought out desirable horses through acquisition and quickly weeded out those with undesirable traits. By 1769, most Plain Indians had horses.

In this period, Spanish Missions were also a source of estray and stolen livestock, particularly in what today is Texas and California. The Spanish brought horses to California for use at their missions and ranches, where permanent settlements were established in 1769. Horse numbers grew rapidly, with a population of 24,000 horses reported by 1800. By 1805, there were so many horses in California that people began to simply kill unwanted animals to reduce overpopulation. However, due to the barriers presented by mountain ranges and deserts, the California population did not significantly influence horse numbers elsewhere at the time. Horses in California were described as being of “exceptional quality.”

In the upper Mississippi basin and Great Lakes regions, the French were another source of horses. Although horse trading with native people was prohibited, there were individuals willing to indulge in illegal dealing, and as early as 1675, the Illinois people had horses. Animals identified as “Canadian,” “French”, or “Norman” were located in the Great Lakes region, with a 1782 census at Fort Detroit listing over 1000 animals. By 1770, Spanish horses were found in that area, and there was a clear zone from Ontario and Saskatchewan to St. Louis where Canadian-type horses, particularly the smaller varieties, crossbred with mustangs of Spanish ancestry. French-Canadian horses were also allowed to roam freely, and moved west, particularly influencing horse herds in the northern plains and inland northwest. 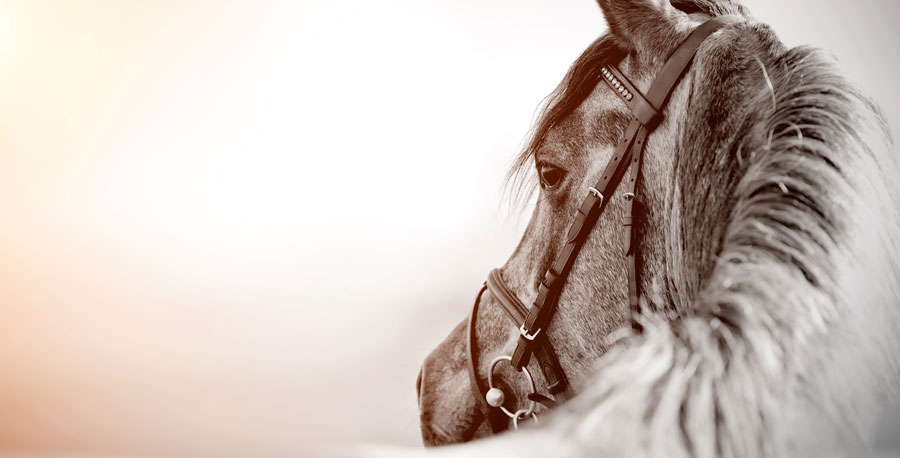 Although horses were brought from Mexico to Texas as early as 1542, a stable population did not exist until 1686, when Alonso de León’s expedition arrived with 700 horses. From there, later groups brought up thousands more, deliberately leaving some horses and cattle to fend for themselves at various locations, while others strayed. By 1787, these animals had multiplied to the point that a roundup gathered nearly 8,000 “free-roaming mustangs and cattle.” West-central Texas, between the Rio Grande River and Palo Duro Canyon, was said to have the most concentrated population of feral horses in the Americas. Throughout the west, horses escaped human control and formed feral herds, and by the late 1700s, the largest numbers were found in what today are the states of Texas, Oklahoma, Colorado, and New Mexico.

19th century
Estimates of when the peak population of mustangs occurred and total numbers vary widely between sources. No comprehensive census of feral horse numbers was ever performed until the time of the Wild and Free-Roaming Horses and Burros Act of 1971 and any earlier estimates, particularly prior to the 20th century, are speculative. Some sources simply state that “millions” of mustangs once roamed western North America. In 1959, geographer Tom L. McKnight suggested that the population peaked in the late 1700s or early 1800s, and the “best guesses apparently lie between two and five million”. Historian J. Frank Dobie hypothesized that the population peaked around the end of the Mexican-American War in 1848, stating, “My own guess is that at no time were there more than a million mustangs in Texas and no more than a million others scattered over the remainder of the West.” J. Edward de Steiguer questioned Dobie’s lower guess as still being too high.

In 1839, the numbers of mustangs in Texas had been augmented by animals abandoned by Mexican settlers who had been ordered to leave the Nueces Strip. When the area was finally ceded to the U.S. in 1848, these horses and others in the surrounding areas were rounded up and trailed north and east, resulting in the near elimination of mustangs in that area by 1860.

The first known sighting of a free-roaming horse in the Great Basin was by John Bidwell near the Humboldt Sinks in 1841. Although Fremont noted thousands of horses in California, the only horse sign he spoke of in the Great Basin, which he named, was tracks around Pyramid Lake, and the natives he encountered there were horseless. In 1861, another party saw seven free-roaming horses near the Stillwater Range. For the most part, free-roaming horse herds in the interior of Nevada were established in the latter part of the 1800s from escaped settlers’ horses.

20th century
In the early 1900s, thousands of free-roaming horses were rounded up for use in the Spanish-American War and World War I.

By 1920, Bob Brislawn, who was working as a packer for the U.S. government, recognized that the original mustangs were disappearing, and was making an effort to preserve them, ultimately establishing the Spanish Mustang Registry. In 1934, Dobie stated that there were just “a few wild horses in Nevada, Wyoming and other Western states” and that “only a trace of Spanish blood is left in most of them” remaining. Other sources agree that by that time, only “pockets” of mustangs that retained Colonial Spanish Horse type remained. 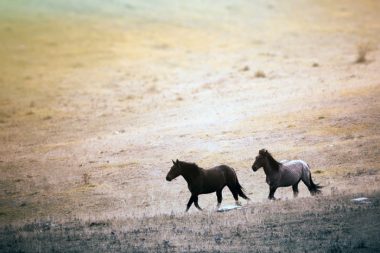 By 1930, the vast majority of free-roaming horses were found west of Continental Divide, with an estimated population between 50,000-150,000. They were almost completely confined to the remaining General Land Office (GLO)-administered public lands and National Forest rangelands in the 11 Western States. In 1934, the Taylor Grazing Act established the United States Grazing Service to manage livestock grazing on public lands, and in 1946, the GLO was combined with the Grazing Service to form the Bureau of Land Management(BLM), which, along with the Forest Service, was committed to removing feral horses from the lands they administered.

By the 1950s, the mustang population horses. Abuses linked to certain capture methods, including hunting from airplanes and poisoning water holes, led to the first federal free-roaming horse protection law in 1959. This statute, titled “Use of aircraft or motor vehicles to hunt certain wild horses or burros; pollution of watering holes” popularly known as the “Wild Horse Annie Act”, prohibited the use of motor vehicles for capturing free-roaming horses and burros. Protection was increased further by the Wild and Free-Roaming Horses and Burros Act of 1971.

The Wild and Free-Roaming Horses and Burros Act of 1971 provided for protection of certain previously established herds of horses and burros. It mandated the BLM to oversee the protection and management of free-roaming herds on lands it administered, and gave U.S. Forest Service similar authority on National Forest lands. A few free-ranging horses are also managed by the Fish and Wildlife Service and National Park Service, but for the most part they are not subject to management under the Act. A census completed in conjunction with passage of the Act found that there were approximately 17,300 horses (25,300 combined population of horses and burros) on the BLM-administered lands and 2,039 on National Forests.

Mustangs today
As of 2015, some populations of free-roaming horses and burros remain protected under the Act, but others have disappeared from places where there were once established populations. A few hundred free-roaming horses survive in Alberta and British Columbia. The BLM considers roughly 26,000 individuals a manageable number, but the feral mustang population in February 2010 was 33,700 horses and 4,700 burros. The BLM has established Herd Management Areas (HMAs) to determine where and how many animals will be sustained. More than half of all mustangs in North America are found in Nevada, with other large populations in California, Oregon, Utah, Idaho, Montana, and Wyoming.

*All the text on this page has been provided by Wikipedia, the free online encyclopedia.

Wherever man has left his footprint in the long ascent from barbarism to civilization, we will find the hoofprint of a horse beside it. 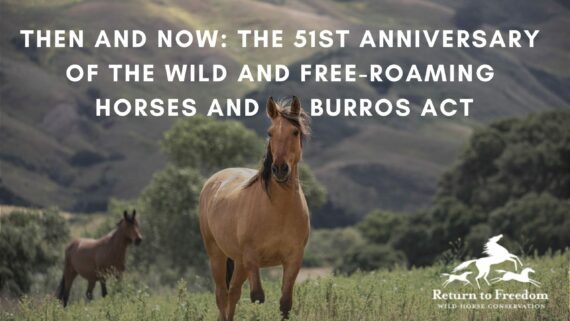 Then and Now: The 51st Anniversary of the Wild and Free-Roaming Horses and Burros Act
December 15, 2022 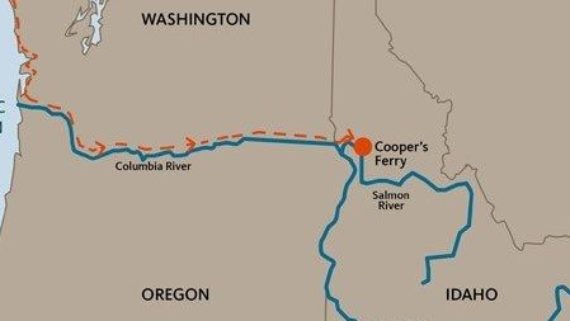 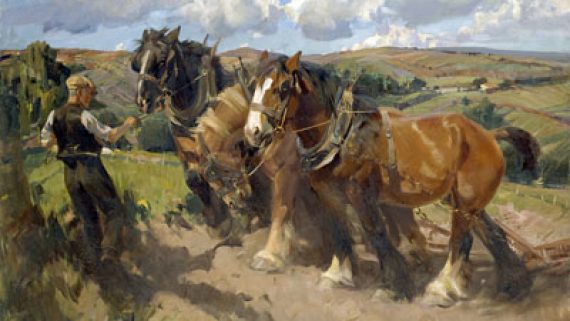 Reframing the history of human progress (The Conversation)
September 7, 2016

Horses as Symbols of Power in History and Mythology
September 7, 2016 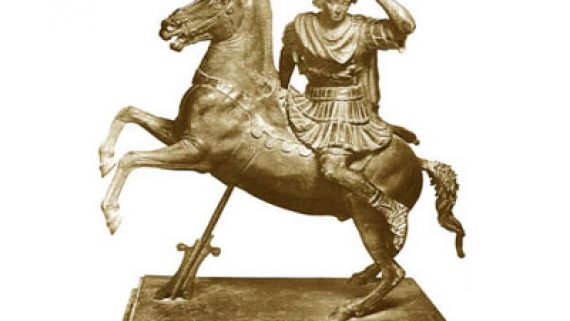 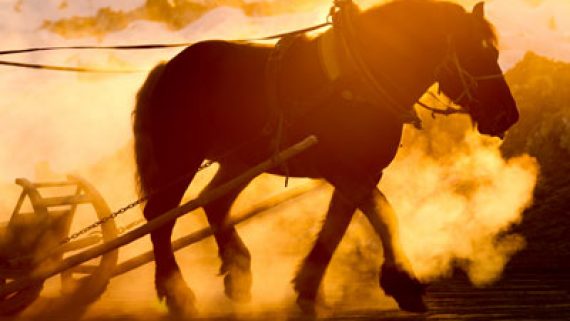 Domestication, Breed Diversification and Early History of the Horse
September 7, 2016 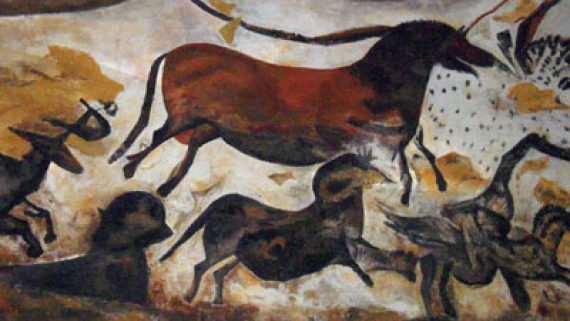 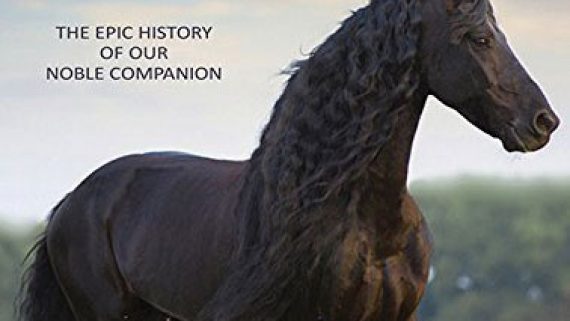 The Epic History of the Horse (Scientific American)
September 7, 2016 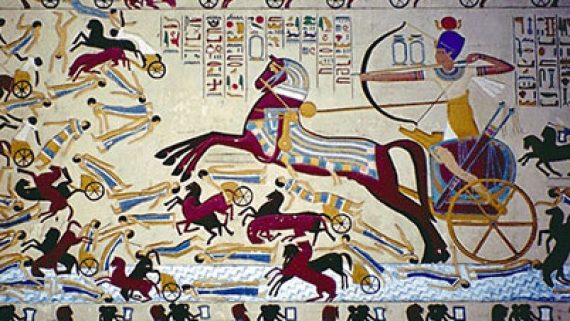 Domestication of the horse (Wikipedia)
September 7, 2016