Walking with a friend in the dark is better than walking alone in the light.
— Helen Keller

Caring for hundreds of displaced wild horses and burros here at Return to Freedom for the past 20 years has taught us many things. One of the most important is to not count anyone out too soon.

Let me tell you the story of our beloved Sundancer.

Before Sundancer was born, his pregnant grandmother was captured in a roundup in the Challis Herd Management Area (HMA) in Idaho by the Bureau of Land Management (BLM). In July 2009, in the high ridges and sagebrush basin just outside of Sun Valley, a deafening helicopter appeared on the horizon, moved ominously towards a herd of wild horses, and changed their world that day.

Nearly 400 wild horses who had roamed this land freely for generations were chased mercilessly for miles over rugged terrain by the relentless object in the sky. Driven to a trap site, the defeated herd seemed to say goodbye to their home, family bands, and freedom—forever.

But against all odds, things got better—much better. Three compassionate strong women—Elissa Kline, Doro Lohmann, and Jodi Herlich—who knew the horses on the range, leased six acres temporarily, fulfilling the promise they had made to them—and with the help of supporters like you, by 2012, 28 horses came to Return to Freedom’s sanctuary—together!

Later, little Sundancer was born in the midst of the large herd, but, sadly, was stepped on when he was just one day old. The accident fractured his fetlock and caused a permanent deformity.

But here, not only do we allow the horses as much freedom as a sanctuary can provide, we do all we can to provide the extra support that a little injured wild colt would not get otherwise.

Also thanks to Return to Freedom’s generous donors, all 28 members of the Challis Herd who arrived at Return to Freedom have been adopted as a herd and have left our sanctuary in Lompoc, California, to run free on thousands of acres in Central California.

But what of young Sundancer, the special colt who remained behind? Would he be able to rise above his injury? With his herd gone, would he find the companionship that horses so badly need?

I’m happy to tell you that we held his mother and grandmother back when the larger herd traveled North, to join them later. We waited… and with lots of care and love Sundancer overcame his shaky start and he has adapted perfectly and became a feisty mischievous colt among a band of playful friends!

But a playful youngster needs a best friend, and, happily, he found that in Sun.

Years ago, Sun found himself in the possession of a horse trader who was also a killer buyer, and he made very clear his intention was to load Sun on a truck bound for slaughter the next day. Luckily, he was seen by a rescuer monitoring the feedlot, and he escaped that horrible fate and ultimately came to us. In fact, he was the first horse we rescued as we were in the process of founding RTF!

Sun is a super smart and playful guy. Some of his talents keep us on our toes—he can open gates and let his friends out! He even teaches himself tricks. He taught himself to bow and march by watching another horse learn how. Sun even picks up his halter when he wants attention.

As Fate would have it, before long big Sun found Sundancer, the little horse in need of a friend, and took him under his wing. Sometimes Sun is seen keeping his young buddy in line when he annoys their other friends resting in the sunshine, the bright light of their namesake.

Once Sundancer was happily bonded with Sun and a few other good buddies, his mother and her mother left for northern pastures to rejoin the others!

As happy as he is, a special horse needs special care, made possible by our supporters. Because of his deformed hoof, Sundancer needs regular special trims. I remember that early on, we were fearful that his injury would not allow him a quality life—but one expert advised that he would probably adjust over time and grow strong- AND HE DID!

The story of Sundancer and Sun is just one of many here at RTF which inspire us to work so hard to help the horses living here, those still free on the range and captured horses living in long-term government holding.

This crucial work is only possible with the help of generous people like you who have supported this work so faithfully.

On behalf of all the residents at RTF—Sundancer, Sun, and all the rest– I want to thank you for making all of this possible over the past 20 years. We will be here as long as the horses need us, and we’re glad—and always grateful—that you’re standing here beside us in this important mission. It would be impossible without you.

To the Wild Ones and those who honor and protect them,

Founder and President, Return to Freedom

Read more about our Challis herd 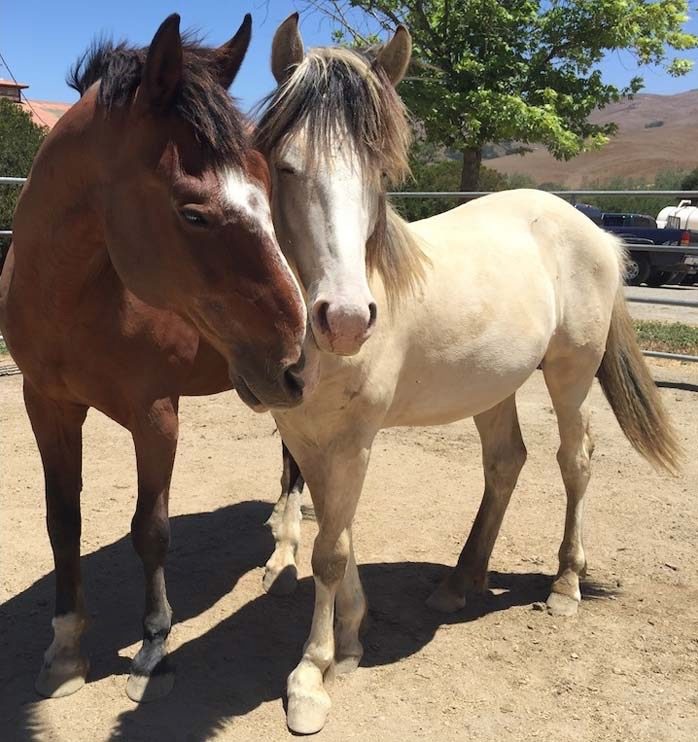 Sundancer (right) and his friend Sun, enjoying the good life at RTF