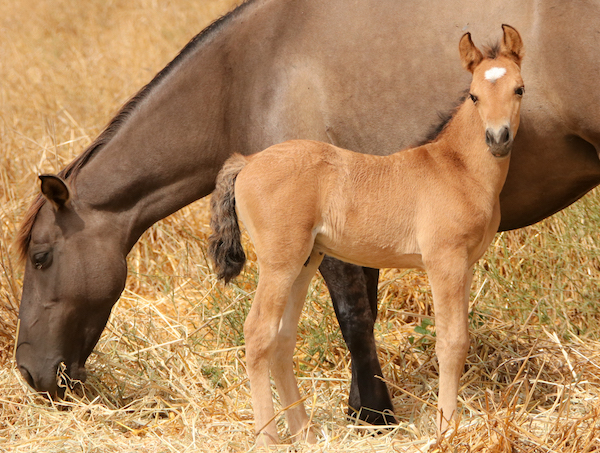 Fuego Dorado (Golden Fire), shown with his mother, Stella, received his name because he was born on a day in August when a downed power line caused a small fire at the sanctuary. No animals or people were hurt that day. Now, we’re working to ensure the safety of our resident animals and staff in light of the current wildfires in the region. Photo by Steve Paige.

Thank you to all of those who’ve reached out to ask whether our American Wild Horse Sanctuary near Lompoc is at risk from the horrific wildfires that have destroyed hundreds of thousands of acres in Southern California.

The short answer is: We’re fine. Some days, it’s been hazy with smoke at the sanctuary, with light ash and a smell like a bonfire in the air. On the worst days, our staff caring for the wild horses and burros here can be seen been doing their daily work while wearing blue masks for their safety.

Like so many others in our region, however, we’re keeping a close eye on the news and announcements from state and county officials, reviewing evacuation plans, and making what preparations we can. Examples of steps we’ve taken are: making arrangements for where we would transport our wild horses and burros, moving burros from the hillside oak forest into a grazed-down pasture so that they would be easier to move, keeping our water truck full, and purchasing more hoses.

The wildfires have also underscored the need to complete a conservation project by purchasing a pump and hoses so that we could deliver water from a lined reservoir to the horses more quickly. We’re also always in need of more trucks, horse trailers (we’re in the process of purchasing one new trailer, thanks to a grant from an anonymous foundation), and water tanks so that we can store the winter rain that will hopefully come soon.

We’ve also been in touch with Shadow’s Fund animal rescue and other nearby sanctuaries about providing a temporary home to their animals, if necessary.

The Thomas fire, fueled by high winds and dry conditions, has burned 270,500 acres and destroyed more than 1,200 structures in Ventura and Santa Barbara counties since Dec. 4. One firefighter, 32-year-old apparatus engineer Cory Iverson of San Diego, has been killed.

On its way to becoming the largest wildfire California history, the Thomas fire remains about an hour’s drive southeast of the sanctuary. Officials estimate that the blaze may not be fully contained until January.

Closer to home, about 10-minute drive away from the sanctuary, and a short distance away as the crow flies, a vegetation fire dubbed the Coast Fire broke out at midday on Thursday. Firefighters were able to contain it at 14 acres.

We only need to look around the sanctuary to see what’s fueling the wildfires. The hills are dry and brown, and we’re relying on supplemental feed and water – made available by our generous donors — for our resident wild horses and burros.

We’re grateful for all of the brave men and women working long shifts on the fire lines, including more than 8,500 fighting the Thomas fire. Our thoughts are with Engineer Iverson’s widow, Ashley, and their 2-year-old daughter, Evie, and the many people and animals that have lost their homes or are living with that threat.

Thank you, all, for your concern and continued support. We couldn’t do what we do without you.

The Return to Freedom team