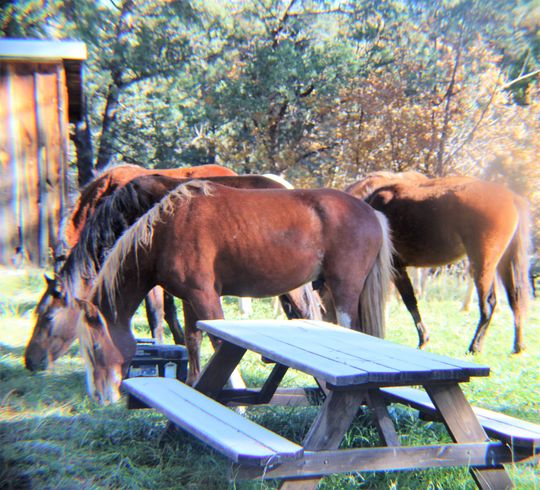 As published by Ruidoso (N.M.) News

Advocates for the wild horse herds in Alto and other herds in New Mexico are busy testifying before New Mexico legislative committees on two bills they are pushing and another they adamantly oppose.

The bills they are advocating would create a wild horse license plate and would enact the Wild Horse Protection and Habitat Act, creating an equine board.

The organization and other supporters are fighting against Senate Bill 158, which would give the New Mexico Livestock Board jurisdiction over wild horses.

Patience O’Dowd, founder of the Wild Horse Observers Association, which won an injunction against the sale of confiscated horses from Alto in 2016, and a 2018 court ruling that the horses truly were wild and must be released back into their habitat, said supporters need to pay attention to SB 158, because of its potentially devastating impact on such equines. Woods is a Republican from Broadview and represents Senate District 7. The original bill was not recommended for passage, but an amended bill received a “do pass” from the Senate Conservation Committee.

“There is no edit to Sen. Pat Woods’ Senate Bill SB 158, which puts the federal and state law breaker, the New Mexico Livestock Board, in charge of our wild horses, that can fix this bill,” she said Thursday. “Moreover, owning a bovine stock trailer and a cowboy hat does not make a wild horse expert. This law enforcement agency has a long-term culture against wild horses and took the feds all the way to the Supreme Court and lost against the 1971 Free Roaming Wild Horse and Burro Act.

“Did they think that law was unclear too?”

O’Dowd claimed that after the recent court win for the wild horses in the 12th Judicial District, the NMLB filed a report to the governor and to the legislature inaccurately claiming that wild horses of Placitas had caused a human death.

“New Mexicans cannot allow this governor to put the lives of these (equine) families in the hands of those who would break the law to eradicate and exterminate them,” O’Dowd said. “The NMLB is an arrogant special interest agency and has a clear vendetta against the people’s native and beautiful natural resource, the wild horse, as shown from 1976 to date.”

Woods’ bill amends existing law to clarify that wild horses are not livestock and creates provisions to establish procedures for handling wild horses, including capture, relocation, adoption and euthanasia, according to the analysis by the Legislative Counsel.

“”Owning a bovine stock trailer and a cowboy hat does not make a wild horse expert.”

The bill changes the existing definition of wild horse from “a horse on public land that is not an estray” to an unclaimed horse without obvious brands or evidence of private ownership. It authorizes the livestock board to capture and relocate wild horses, and transfer horses under the federal jurisdiction of the Bureau of Land Management, or arrange for adoption or humane euthanasia “provided that this option shall only be available as a last resort” for an unhealthy horse. The bill also allows the board to capture and use birth control on wild horses.

Livestock board officials contend a clear definition of wild horses and public land will prevent continuous litigation. The board also indicated being able to quickly move domesticated roaming horses from state custody would have a significant impact on the agency. Without clarification, the board will remain in an untenable position of either responding to requests form private citizens for relief under estray statutes, being sued for impounding animals that have not been found by a court to be domesticated and precluding the board from performing its statutory duty regarding estray horses captured on private land, board officials contended.

A bill to protect wild horses

To ensure the future of wild horses, HB 445, would enact the Wild Horse Protection and Habitat Act and establish an equine board. The bill, which would appropriate $300,000 from the general fund to the New Mexico Equine Board to cover the cost of carrying out the act’s provisions, is supported by WHOA.

The Act would establish criminal penalties for violations and create a wild horse protection and habitat fund. Among its duties, the equine board would regulate the treatment of wild horses; establish fees of no more than $100 for fencing, training, range improvement, adoptions and other services; and employ wild horse specialists and an equine veterinarian and inspectors with peace officer powers to enforce the act.

–      Develop a process to determine if an equine is wild or has been abandoned by its owner, and work with the livestock board to reduce abandonment

–      Work with the tourism department to develop a revenue stream.

The board would have authority to use birth control, and if necessary, relocate, adopt out or euthanize unhealthy horses. Captured horses would undergo DNA test.

The bill makes it illegal to allow a horse to road unattended outside a fenced property or for anyone to drive, hold or kill a wild horse or lure it from its natural habitat.

The bill would place responsibility on landowners to fence out wild horses.

The legislative counsel noted that the appropriation of $300,000 would be a recurring expense, but any unexpended or unencumbered balance at the end of Fiscal Year 2020 would revert to the general fund.

Officials with the livestock board called the appropriation “insufficient to the point of absurdity,” pointing out that one state employee with benefits would cost about $75,000.

Tourism officials said they lack enough information about the potential for wild horses as a draw to judge if it would be effective for the department to market wild horse observation.

In its comments, the livestock board listed 10 concerns and indicated many more existed. Those noted included the definition of wild horse in the bill might conflict with the federal Wild Horse and Free-Roaming Horse and Burros Act; the equine board would duplicate and conflict with some duties of the livestock board; and the bill would restrict the ability of the equine board to control the horse herd population to birth control, relocation or adoption, because euthanasia would be a last resort only for a crippled or otherwise unhealthy equine.

The bill was referred to the Judicial Committee, Energy and Natural Resources Committee and the Appropriations and Finance Committee.

House Bill 444 would amend the motor vehicle code and provide for a special registration vehicle plate expressing support for wild horses and establishing an appropriation. The cost of a plate would be $40 in addition to the regular motor vehicle registration fees. Of that amount, $10 from each plate will be retained by the Taxation and Revenue Department for the manufacture and issuances of the plates. The other $30 would go to the state tourism department to support tourism related to wild horses.

The legislative counsel wrote that the Department of Game and Fish contends special wild horse license plates would raise awareness of wild horses in the state and could be detrimental if the general public begins to equate wild horses with wildlife. Support possibly could be drawn from other supported causes including Share With Wildlife, resulting in a decline in revenue for that program.

Many organizations believe having a special license plate for their cause will make significant revenue. While that is not true generally, “there may be an awareness factors for drivers by seeing a special plate on vehicles,” the counsel wrote.

The bill was referred to the committees on transportation and public works, and appropriation and finance.