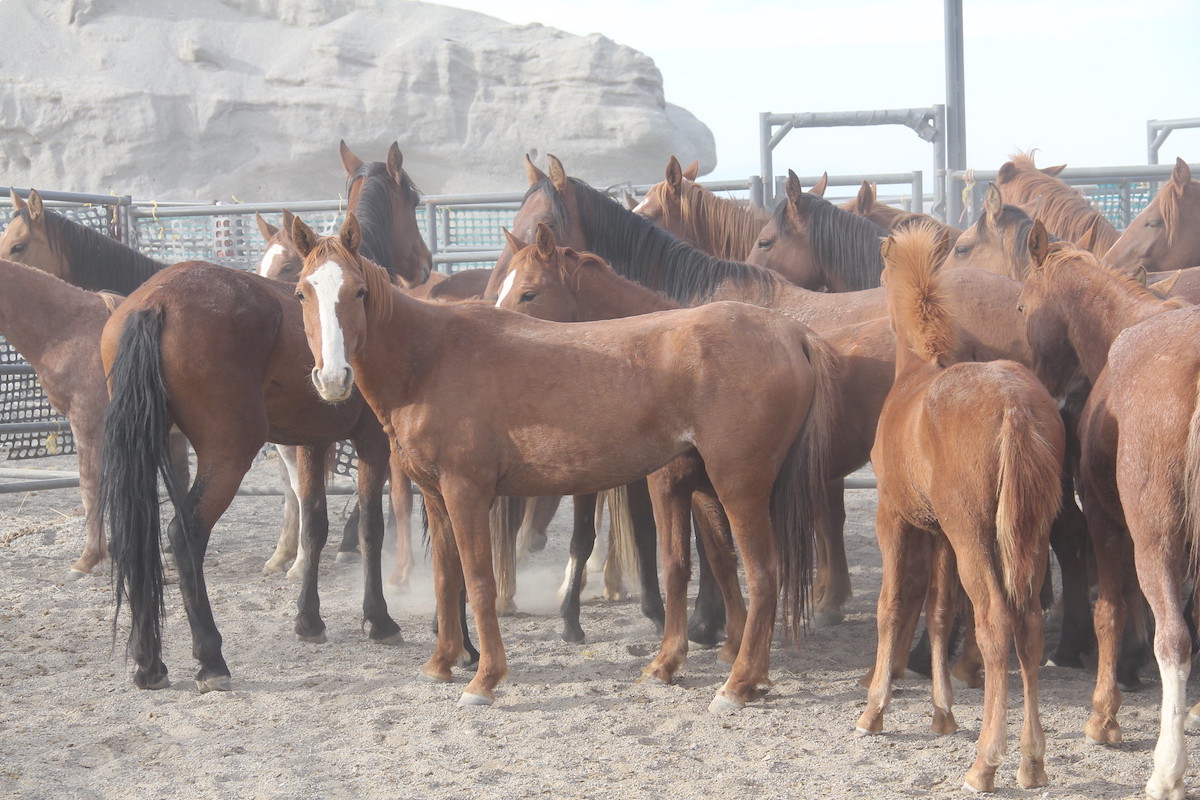 The Bureau of Land Management has captured 443 wild horses during the first 16 days of a planned two-month bait-and-trap roundup in and around eastern Nevada’s Antelope and Antelope Valley Herd Management Areas. The agency’s goal is to remove 1,250 “excess” wild horses from their home range.

Five wild horses have been put down, according to BLM:

–a 5-year-old sorrel mare after suffering a neck injury;

–a 4-year-old sorrel mare due to what was described as a chronic, or previously injured, broken leg;

–a 3-year-old black stud due to what was described as a chronic, or previously injured, broken hip;

–a 10-year-old sorrel mare and a 4-year-old bar mare because of blindness.

So far, 410 wild horses have been trucked to the  Indian Lakes Off-Range Corral in Fallon, Nev., to be readied for the BLM’s adoption and sale program. In addition, one foal described by BLM as “leppy” (orphaned or abandoned) was placed into foster care.

The agency’s stated justification for the roundup is to “reduce the overpopulation of wild horses, in order to prevent further degradation of public lands by helping to balance herd size with what the land can support. The BLM aims to protect habitat for other wildlife species such as sage grouse, pronghorn antelope, mule deer and elk. Removing excess animals would also enable significant progress toward achieving the Standards for Rangeland Health identified by the Northeastern Great Basin Resource Advisory Council.”

In March, the BLM estimated the population of the Herd Management Areas at 2,794, with another 200 wild horses outside the HMA boundaries on private land.

Only a relative handful of mares will be returned to the range after being treated with fertility control (see “study” below), which would reduce the need for future roundups.

The BLM-set “Appropriate Management Level” for the portion of the two Herd Management Areas where the roundup will be conducted is 187 t0 361 wild horses.

The overall Antelope HMA measures 399,761 acres, including 72,376 acres of mixed private and other public lands. The BLM-set “Appropriate Management Level” is 150 to 324 wild horses or as low as one horse for every 2,664 acres.

By contrast, the BLM permits 124,931 Animal Unit Months of private livestock grazing, including cattle, sheep, goats and domestic horses on the Antelope HMA (one AUM equals the forage to sustain for a month one cow / calf pair, one horse, or five sheep / goats). Actual livestock use from 2007-2017 was 40,612 AUM, according to planning documents.

The overall Antelope Valley HMA measures about consists of 502,909 acres, including 6,553 acres of a mix of private and other public lands. AML has been set at 115-259 wild horses or as low as one horse for every 4,373 acres.

Starting on Sept. 4, members of the public will be able to view captured horses at temporary holding corrals every other week on Wednesdays. Those interested should meet BLM personnel at the Lages Junction located at the intersection of Highway 93 and Alternate Route 93 at 9 a.m.

To confirm viewing will occur or for specific instructions for a given date, see https://go.usa.gov/xytAJ

As part of the roundup, about 50 wild horses will be gathered in the 31,000-acre Water Canyon area of the Antelope HMA as part of a 10-year study of the effectiveness of the fertility control vaccine GonaCon-Equine in partnership with local advocates.

The management objectives are to maintain a 50-50 ratio of studs to mares.

BLM’s goal is to gather all the wild horses in the area, remove “excess” wild horses, and maintain a population of 30-35 wild horses in Water Canyon. All mares released will be treated with GonaCon.