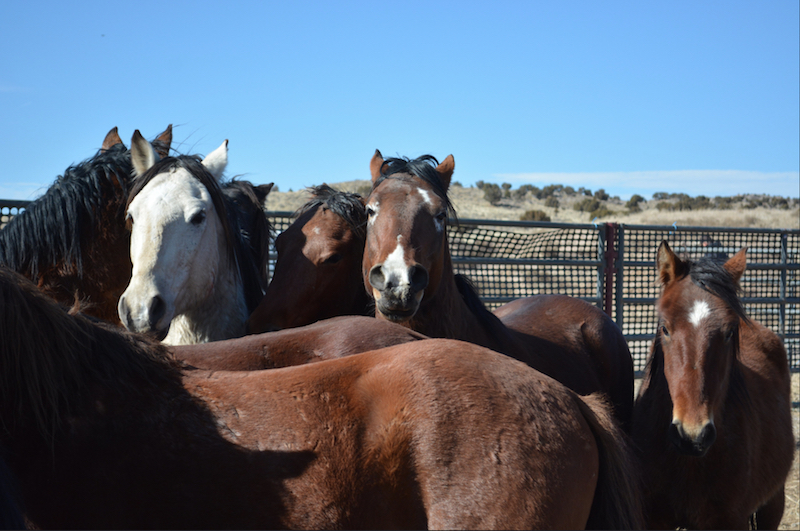 Studs in a temporary holding pen on the first day of the Eagle Complex roundup. BLM photo.

The Bureau of Land Management has captured 1,061 wild horses through Sunday, the 17th day of a planned 1,600-horse helicopter roundup on the Chokecherry, Eagle and Mt. Elinor Herd Management Areas near Pioche, Nev.

Unusually, the BLM announced that was counting “all of last year’s weanable foals … as adults,” resulting in a tally of 594 mares, 477 studs and just four foals.

Thirteen horses have been put down for “pre-existing conditions,” according to BLM, including missing eyes, “severe” swayback, as well two studs and two mares with body condition scores of two or lower on a nine-point scale. The most recent death was a 5-year-old grulla mare, euthanized on Sunday for swayback.

The BLM estimates the wild horse population of the combined three HMAs, known as the Eagle Complex, at 2,484 horses, including foals. The agency-set Appropriate Management Level for the 743,042-acre complex is 139-265 wild horses or as low as one horse for every 5,346 acres.

By comparison, six cattle and sheep grazing allotments have at least 37% of their acreage overlapping the Eagle HMA. The 10-year average annual use on those allotments was 28,732 Animal Unit Months, according to BLM planning documents. One Animal Unit Month is a month’s forage for one horse, one cow / calf pair or five sheep.

In addition to capturing and removing 1,600 wild horses from the Eagle Complex, BLM plans to treat an additional 50 mares with the fertility control vaccine GonaCon-Equine then release those mares with an equal number of studs.

In 2018, BLM removed 303 wild horses from the Eagle HMA in an emergency roundup that the agency said was conducted due to lack of water.

Captured wild horses will be transported to the Palomino Valley Center Wild Horse and Burro Corrals, in Sparks, Nev., where they will be readied for adoption or sale.

Viewing the roundup: Members of the public will be allowed to view roundup activities starting on or about Jan. 14. Those who wish to take part must call the gather hotline nightly at (775) 861-6700 to receive specific instructions on each days’ meeting location and time.