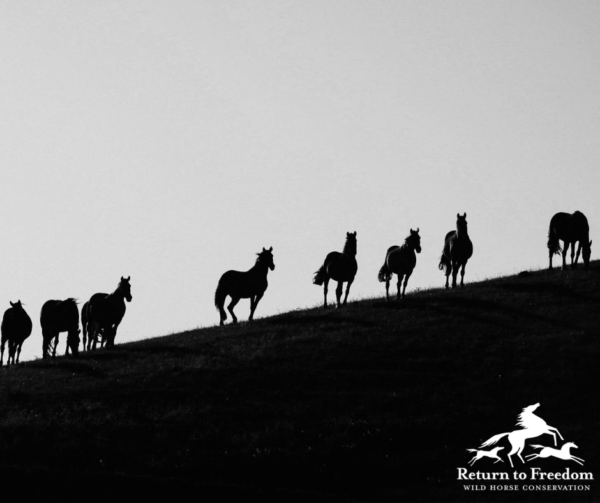 In October of 2022 The Black Rock BLM Field Office conducted a roundup of horses in the Calico Complex near Gerlach, Nevada.

A BLM contractor removed 863 horses, which were deemed “excess.” Of that group, 39 mares were treated with fertility control and were slated to be released. The fertility control used was GonaCon and requires a second dose 30 days after the first dose. Once the treated mares are released, a total 837 horses will have been permanently removed from the Calico Complex. It is unclear which holding facility they will go to.

The BLM planned to release the treated mares on December 13th and members of the public were invited to witness the release. So far we have not seen any update as to whether the mares have been released as of yet and inquiries have not received a response.

Return to Freedom is pleased with the implementation of fertility control and release of mares. However, 39 treatments is not a significant proportion of the population to prevent the BLM from conducting further roundups.

RTF is not as familiar with Gonacon but has been supportive of PZP fertility control because it has been studied and proven over the longest period of time and found to be safe, effective and humane in the greatest number of horses, including, importantly, the greatest number of horses in free-roaming herds. Further, PZP carries and excellent reputation in wild horse advocacy circles. RTF was the fourth project in the world to use PZP on larger numbers of mares and has utilized PZP for 24 years with our herds at the sanctuary. It has proven to be minimally intrusive while also being effective. It is a very sophisticated fertility control vaccine with no negative impact on herd behaviors. While RTF supports the BLM’s use of fertility control, we believe there needs to be more long-term studies of GonaCon. RTF is invested in helping the BLM form plans to scale up efforts using fertility control so that enough mares in a population are receiving treatment. In order to do so, we need to understand how field offices can continue to scale up these efforts, have the staff to do so and increase public/private partnerships.

Horses of the Calico Complex are descendants of ranch horses that either escaped or were released into the area. This area is also utilized by domestic livestock during a large part of the year there. In January of 2012 the BLM removed 960 “excess” horses from the complex. Prior to that, during a two month long round up, between December 2009 and February 2010 the BLM removed more than 1,700 horses from the Calico Complex. The roundup happened during the winter and resulted in 140 horses dying due to being chased long miles over snowy and icy terrain—young foals, senior horses and pregnant mares included.

Return to Freedom took in 20 stallions and 74 mares from the 2010 gather and offered them permanent sanctuary. At the time of previous round ups, fertility control was not implemented. Thus, perpetuating the BLM to conduct more roundups. It is encouraging to see the use of fertility control during the 2022 roundup, but again it needs to be applied to a larger number of mares to slow down reproduction. RTF will continue to monitor the Calico Complex to determine the outcome of treating the 39 mares.