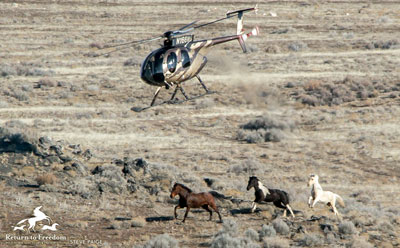 They marked the first deaths that the Bureau of Land Management has reported since the roundup began on Feb. 11, according to the agency.

The mare died “due to foaling complications” in the corrals overnight, according to BLM, while the stud was put down because of a ” severe left shoulder injury that caused a clubfoot on the right front.”

Contractors are expected to move to a new trap site on the Horse Management Area for Thursday after capturing just eight wild horses on Wednesday — a day after 116 were driven into the trap.

Altogether, 285 wild horses have now been captured. BLM intends to capture up to 700 before the roundup’s end.

The agency plans to separate out and permanently remove from their home range 200-300 “adoptable age” wild horses. Those not adopted will be moved to government holding facilities, according to the agency.

The other wild horses captured — including about 200 mares that will be treated with PZP-22 fertility control vaccine — will be returned to the range.

The 197,275-acre Cedar Mountain Herd Management Area, located about 50 miles west of Tooele, Utah, has a BLM-assigned Appropriate Management Level of 190-390 wild horses and a current horse population estimated at 960, according to the agency.

BLM planning documents related to the roundup can be found here.

Cedar Mountain is the fourth helicopter roundup of 2017.

Members of the public can view the roundup on BLM-escorted tours departing at 5:30 a.m. MST from the Flying J gas station at 1605 East Saddleback Blvd. in Lake Point, Utah. Information will be updated daily on the BLM’s hotline, (801) 539-4050.

Participants must provide their own transportation, water and food. They should dress for harsh winter weather and know that restrooms are not available after tours begin. Binoculars and four-wheel drive vehicles with a high clearance are strongly recommended.