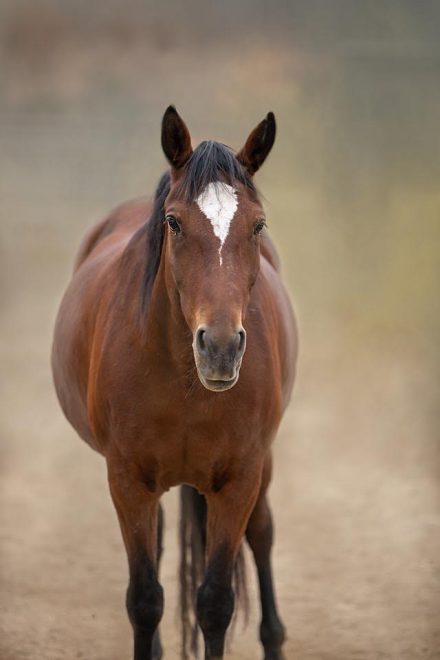 Tahli Holitompa, Choctaw for “Red Pearl”, was born at Return to Freedom’s American Wild Horse Sanctuary on April 9, 2009. Her Dam (mother) is Red Creek and her sire (father) is Chief Iktinike.

Tahli, inherited the deep rich bay coloring from her mother. Unlike her mother, she is approachable, friendly and enjoys attention from humans. She is comfortable with a domestic lifestyle yet has been educated by a herd of seven wise matriarchs and Iktinike as their watchful stallion.

The Choctaw horses are Spanish horses that remain from the early colonial efforts of the Spaniards in North America. These horses arrived with Hernando DeSoto in the 1500’s and by the 1800’s they had been completely integrated into some of the tribal cultures in the Southeast.

In the 1830s, these small horses carried the infirm on the tragic “Trails of Tears”, beginning with the Choctaws forced march from Mississippi to Oklahoma.
The horses continued to face persecution after arriving in Oklahoma as a result of a “tick eradication program” conducted by the U.S. Government. The horses who survived were those who escaped into the wooded mountains of Oklahoma.

The pure descendants of these horses are part of a conservation program founded by the late Gilbert Jones on Black Jack Mountain, Oklahoma in an effort to preserve their unique color genetics, temperament and heritage. Since the 1950’s, Gilbert Jones pioneered a conservation program for Spanish mustangs including the ‘Hidalgo horses’ and the Choctaw horses. In 2008, the timber company ceased all livestock and horse grazing leases on Blackjack Mountain and all the horses were removed. Bryant Rickman continues Gilbert Jones’s legacy in Oklahoma.

In 2005, Return to Freedom collaborated with screenwriter John Fusco and launched The Choctaw Horse Conservation Program. Dr. Phillip Sponenberg chose a band of seven mares from Blackjack Mountain to join Chief Iktinike in forming a foundation group to help preserve these rare horses in what he calls ‘a genetic rescue’. 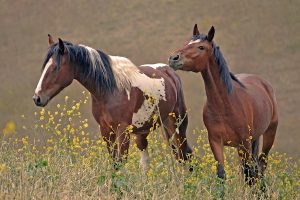 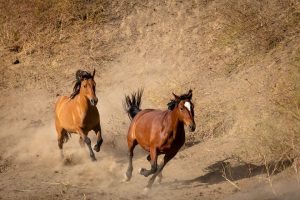