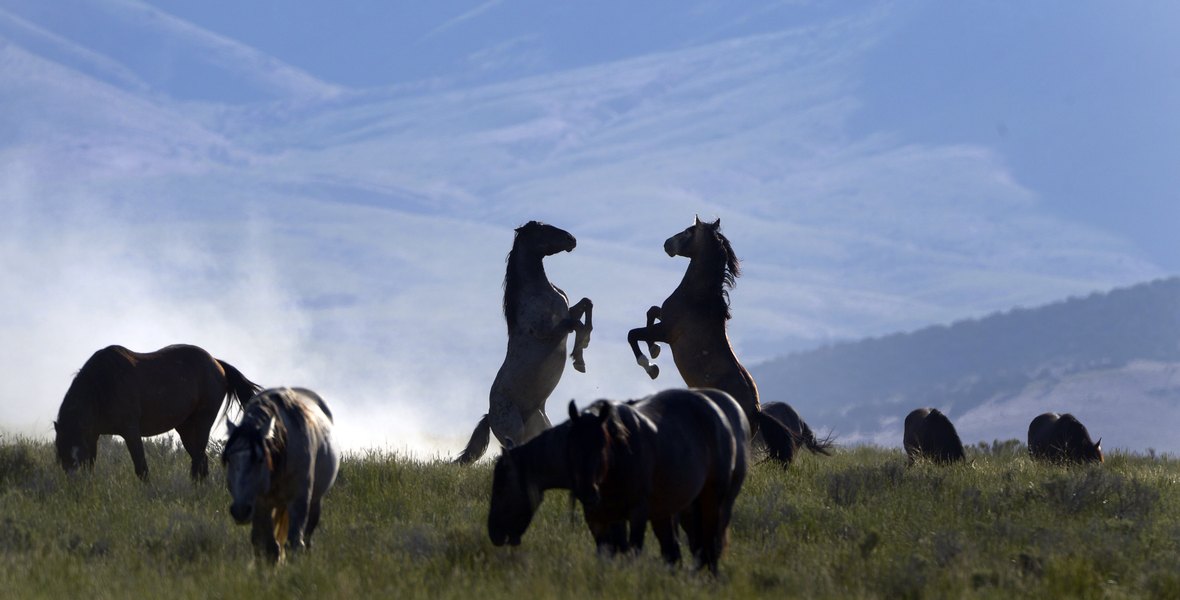 Horses from the Onaqui wild horse herd, about 60 miles southwest of Tooele, near Simpson Springs, in 2014. Salt Lake Tribune photo.

As published by The Salt Lake Tribune

Utah’s most visible wild horse herd may get a lot smaller next year.

The Bureau of Land Management is proposing to remove up to three-fourths of the 450 horses that populate the Onaqui herd about 40 miles southwest of Salt Lake City. The move is needed to reduce effects the herd is having on vital sage grouse habitat occupied by Utah’s most imperiled population of the famous ground-nesting bird, the BLM said in announcing a public comment period through Oct. 31.

“It’s a beautiful herd loved by many, so we want to make sure we approach this in an open fashion,” BLM spokeswoman Lisa Reid said. “There are several factors playing a role in this and livestock grazing is not one of them.”

The proposed roundup, known as a gather, would be conducted in coordination with Brigham Young University researchers studying the interplay between horses, sage grouse and vegetation treatments. Collected horses would either be put up for adoption or to live out their days in contract pastures.

But the proposal has dismayed horse advocates who two years ago were singing the BLM’s praises for administering fertility control to Onaqui mares without roundups, which are costly for taxpayers and traumatizing for the animals. Advocates have long endorsed the use of a fertility vaccine known as PZP as a humane alternative for addressing horse overpopulation and hoped the Onaqui project would serve as a showcase for the drug’s effectiveness.

“The BLM is not giving PZP a chance to stabilize population growth and reduce herd numbers over time,” said Deniz Bolbol of the American Wild Horse Campaign. “Rather the agency reverts to its old, failed status quo roundup and remove method which is not ‘management’ and destroys horse families.”

A 2013 National Academy of Sciences report urged wider use of PZP for controlling herd sizes, which can double every four or five years. But in the years since, the BLM has slowed applications of the drug, which is typically injected into mares that have been rounded up in helicopter operations.

“Instead of spending hundreds of thousands of tax dollars on another cruel roundup and putting more horses in holding, it should focus resources on vaccinating a sufficient number of horses with the PZP vaccine and giving this scientifically proven method a chance to work in a humane and cost-effective manner to stabilize this very popular herd,” Bolbol said.

Two years ago, BLM officials began administering one-year version of PZP to ungathered Onaqui mares with the use of dart guns, made possible because these animals are acclimated to the presence of people who come to watch and photograph them.

The agency partners with a Utah volunteer, Jim Schnepel, to administer the drug but not enough mares were treated to stem the herd’s growth, according to Reid. In the past year, Schnepel delivered the drug to 53 horses, or about 25 percent of the herd’s mares.

“To see impacts we need to treat at least 80 percent of the mares,” Reid said. “If you have that many horses on the range, it is impossible to get to all the mares.”

Please refer to “Onaqui Wild Horse Gather/Population Control and Research” in the subject line of the letter, e-mail or fax.