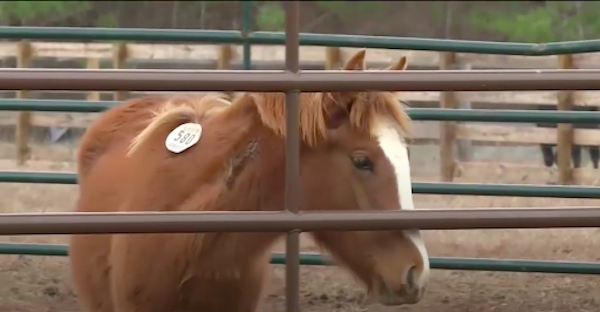 As published by KLAS

Vernon Parish, LA. (KALB) Court records filed on Friday show the U.S. Army is standing by the August 2016 decision to round up and remove ‘trespass’ horses. A wild horse advocacy group challenged that with a preliminary injunction earlier this month. In the meantime, local rescues and residents continue to find homes for the horses.

Lisa Alexander with Freedom Reins Ranch and Rescue in Leesville was asked by Fort Polk to pick up horses from the latest roundups. She’s taken in two groups since December, within a couple weeks of each other during breaks between rotations at the Joint Readiness Training Center. That time frame concerned Pegasus Equine Guardian Association, who wants the Army to pause roundups.

The lawsuit, which can be found on PEGA’s website asks that one of their representatives be present to document and oversee the removal process of the horses. Machelle Hall with the Tulane Environmental Law Clinic says their client wants the Army to remove the horses in a thoughtful and humane way.

“Some of them (Fort Polk horses) have a lot of meaning culturally and historically to the people that grew up and live in this area,” Hall told KALB over the phone earlier this month. “I don’t think that was really considered in the Army’s plan.”

Court records show that on Friday the U.S. Department of Justice on behalf of the U.S. Army stated the motion should be denied, citing the safety of military personnel and horses at JRTC in their response. The response also reiterated the legality of the August 2016 decision to remove the horses. Their response stated they had already fully complied with the National Environmental Policy Act and National Historic Preservation Act which PEGA’s lawsuit said the Army had violated. Fort Polk’s final Environmental Assessment for the “elimination of trespass horses” can be found on their website along with information to get on the 501(c)(3) and public give-away list. Local rescue organizations are first to be notified of a roundup, have three days to respond and eight days to pick up all horses in the group.

Alexander said it takes a community effort to help find homes for the horses. “Sometimes they’re not whole but they’re all beautiful and deserve a chance.”

One of those fosters is Crystal Decuir of Mansura, who has five Fort Polk mares and a baby. Both women have a passion for horses, no matter the cost.

“You work for days and days and days trying to get them to trust you and once you finally get that first touch it’s like having a newborn baby and they just become your best friend,” said Decuir. “They’re priceless to me.”

“Some people are like ‘I need chocolate or whatever’ and I’m like no, I just want to touch wild horses!” said Alexander.

PEGA’s lawsuit also claims the Army is in some capacity contracting a local kill buyer by the last name Thompson and wants there to be more transparency to keep Ft. Polk horses from possibly being sold for slaughter.

A Facebook page for Thompson’s Horse Lot and Co. describes themselves as a feed lot that sells horses ‘as is’ to the public that would otherwise be sold for slaughter. The Pitkin lot buys horses that are often neglected or abused and can only house them for a certain time period. A man who answered the number listed on their page told KALB the company ‘gives horses a second chance.’

Decuir has never worked with Thompson’s Horse Lot but has bought from a kill pen in Avoyelles Parish. She explained that wild horses can be difficult to find homes for.

“Everybody wants a horse that they can throw a saddle on and ride. They want something that they can stick in a pasture that they can send their kids out to go play with. These horses are a little different. You have to gain their trust and just be patient and show them a lot of love.”

Regardless of litigation, Alexander’s mission to help preserve what she says is living Louisiana history won’t change.

“When we first moved here we would go out and watch them all the time because I’m like, this is the coolest thing about Louisiana they have wild horses, what!”

A public hearing is set for January 30th in Lake Charles.