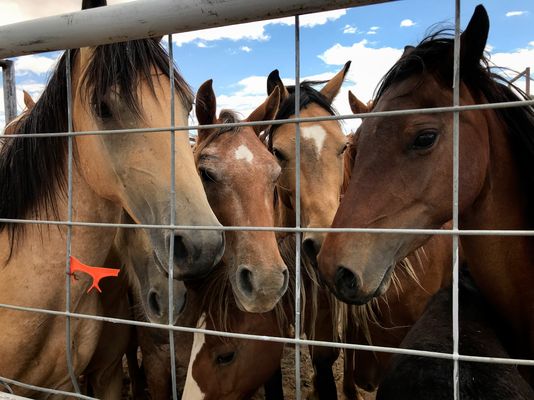 A note from RTF: The Navajo Nation and the U.S. government’s own Bureau of Land Management would benefit from pursuing broad-scale measures that stem the reproduction of free-roaming wild horses. PZP contraception methods are proven to work. The drought and absence of fertility control will only make the challenge for the tribe greater. We want to help agencies pursue these long-term, humane approaches to wild horse management.

As published by Farmington Daily Times

The Navajo Nation Department of Agriculture has developed a program to encourage the removal of unbranded free-roaming horses from tribal land because of declining range conditions.

The incentive is a voluntary horse sale and equine reward program that was rolled out on Friday and offered $50 by way of a promissory note for each horse surrendered at the auction yard in Naschitti.

Roxie June, principal planner for the department, said attention about the overpopulation of feral horses on the reservation started in 2013 after several horses died at an earthen dam on the Cottonwood-Tselani Chapter in Arizona.

Since then, the department has been using its annual budget to address the issue, including conducting horse roundups and entrapments when requested by chapters.

As of Friday, the department had removed 2,034 feral horses by roundup and entrapment this year, June said.

Those methods and other proposals by tribal departments for feral horse removal have received criticism and opposition from equine advocates and animal welfare organizations.

“We try to leverage our funding and do as much as we can. No matter what we do — if we fix the windmills, if we fix the earthen dams, if we reseed, if we do conservation — those horses are still there and they’re still eating up the range,” June said.

“It’s like a vicious cycle, and the only option for the Navajo Nation is to remove horses,” she added.

June said she understands the opposition to feral horse removal, but the tribe continues to develop alternatives for addressing the matter because there is concern about the welfare of the horses and the condition of the land.

In response to the situation, the incentive was developed, and its launch was held on Friday and Saturday in Naschitti where the auction yard can accommodate the animals.

The department funded the program as part of a $250,000 grant awarded this year by the U.S. Department of the Interior.

The grant was given to the agriculture department and to the Navajo Nation Department of Fish and Wildlife, which addresses feral horses on the tribe’s mountain ranges.

The amount was equally divided between the two sectors, and the agriculture department is using $19,000 to reward individuals who hand over horses.

Fifty dollars was paid for each horse, and the department will issue payment within 30 days, according to the program’s agreement.

On Friday, the department staff was joined by Bureau of Indian Affairs employees and grazing committee members from local chapters to help unload, inspect and sort horses.

As part of the intake process, an inspector and ranger examined horses for branding and used a device to detect microchips. Documentation about a horse’s physical appearance also was collected.

In February, the tribe’s Commission on Emergency Management declared a drought state of emergency due to low precipitation, which has created a critical shortage of water and range feed for livestock.

Unbranded horses collected during the program will be transported for auction, she said.

Any branded horses will be held for two days while attempts are made to locate owners. If the owners are not found or do not collect the animals, they will be sold, June said, adding such action is a provision under tribal law.

If branded horses are relinquished by owners for voluntary sale, they must show proof of ownership, and are referred to livestock buyers, who are on site and set prices separate from the program.

The department is considering conducting the program in September in Piñon, Arizona.

One mare and two stallions from Round Rock, Arizona, comprised the first group to arrive at the auction yard.

Navajo Nation Ranger Sgt. Randall Jim used spray paint to mark the equine and shouted the physical descriptions for each one.

After the information was collected, Lacey Salabye, an extension agent with the department, handled the horses and moved them into holding pens.

Owner Harrison Goldtooth surrendered the three horses because the monthly purchase of hay was becoming costly, and he worried about the expense increasing during winter.

“I wanted to get rid of them because of the drought. There is less water,” he said.

With Goldtooth relinquishing the three animals, approximately 27,000 pounds of wild forage will be saved annually, an agriculture department employee said.

Immediately after Goldtooth’s horses were sorted, a batch of three stallions, two mares, a colt and a gelding arrived from Newcomb.

A few hours passed before three livestock trailers were filled with horses brought to the yard.

Dale Redhouse, the grazing official for the Teec Nos Pos Chapter in Arizona, was watching the process because he said it could be an option for the chapter to utilize.

“I want to learn more and how to go about it,” he said.

Teec Nos Pos has a large population of feral horses, and chapter members have approved resolutions over the past two years to have the tribe’s agriculture department and the BIA remove horses.

“We need to take care of our land before it gets to be a desert storm,” Redhouse said.