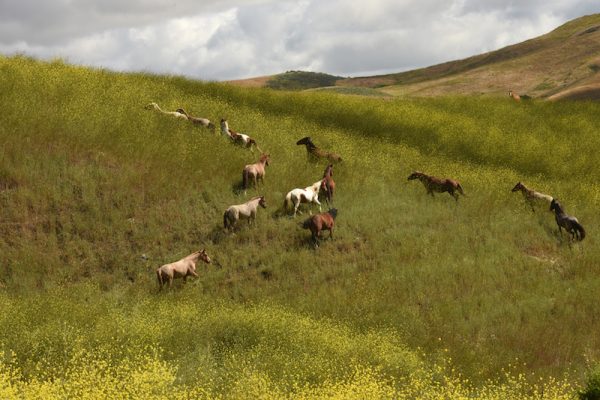 As Return to Freedom continues to be involved in policy discussions affecting wild horse and burro management, we are deeply concerned with suggested rule changes to the National Environmental Policy Act – some of which could limit public comments about roundups or even exclude management options like roundups from going through any sort of environmental review.

The 1970 National Environmental Policy Act (NEPA) directed government agencies to assess any environmental effect of a proposed action before a decision was made. The process can be repetitive and bureaucratic, but it is an important tool for ensuring continued environmental protections. Congress has recognized that the reviews are cumbersome and has recommended improved interagency coordination, concurrent reviews, and increased transparency.

In January 2020, the White House Council on Environmental Quality (CEQ) proposed new rules in the name of streamlining the bureaucratically complicated NEPA.  However, the NEPA rule changes as written are not directed towards any of Congress’ intelligent recommendations. Instead, they simplify agencies’ NEPA obligations, reduce actions requiring NEPA review, impose arbitrary time and page limits, eliminate the evaluation of cumulative effects of an action, and reduce public comment opportunities.

Specifically, we are concerned about:

Eliminating the evaluation of cumulative effects.
Cumulative effects are impacts on the environment which result from “the incremental impact of the action when added to other past, present, and reasonably foreseeable future actions.” Seemingly insignificant singular actions or activities may not result in a harmful or immediate environmental effect, but a succession of activities or actions can (and often do) have harmful or negative environmental consequences. NEPA recognizes this and protects our land, our air, our waters, and our health from seemingly insignificant actions.

Set time and page limits.
NEPA is time-consuming, but there is a good reason for this: complicated projects do take more time. Reports and analysis will be longer for such projects. Working to meet arbitrary deadlines and length limitations will falsely hasten reviews and eliminate necessary data.

Timing and occasion for public input.
CEQ proposes soliciting public input earlier in the process, evidently so that relevant information is considered in the earliest drafts of an Environmental Assessment (EA) or Environmental Impact Statement (EIS).  What this accomplishes is the exact opposite of the supposed intent: instead of the public being able to provide meaningful input through a process, including during those early stages, the public is only given a symbolic occasion to comment during the earliest stage of a project, and not once the true nature and scope of the project is understood.

Establishing government-wide Categorical Exclusions (CE’s).
The CEQ requests comments on a rule change suggestion that some CE’s be government-wide. This may be a good idea for administrative maintenance, but it is not ecologically relevant and so cannot be a part of decision-making for projects that will affect the environment. Sweeping categorical exclusions are industry-driven and NEPA was established to protect the environment and our public lands in general, and that includes from inappropriate, buddy-deals. It is not within the context of NEPA to establish a “faster, better, cheaper” methodology for development, which government-wide CE’s would secure.

Private entity participation in NEPA preparation.
Section 1506.5 asks for comments on allowing greater flexibility for project sponsors (including private entities) to participate in the preparation of NEPA documents.  It is unrealistic to expect that an organization, business, or individual applying for a project on public lands would participate in the preparation of NEPA towards that project in an unbiased, environmentally sound way. This is an obvious conflict of interest.

Streamlining or updating NEPA is all well and good, but suggestions that narrow agencies’ NEPA obligations and reduce actions required for NEPA review do not follow the very purpose of the policy.  NEPA allows for weighing environmental impacts equally alongside other factors as part of practical, ecologically-driven decision-making processes.  Sweeping exclusions, time and page limits, and shortening or eliminating public participation do not enable a critical review, but rather set up a system that is easily manipulated by special interest groups – exactly the opposite of NEPA’s intent. Responsible management of wild horses and burros on public lands requires thoughtful environmental analysis and the opportunity for stakeholders to meaningfully engage in the process.

In conclusion, a better attempt at “fixing NEPA” would be to structure the coordination between agencies, and to hire and support the manpower actually needed to do this important work well (both the coordinating between agencies and the actual on-the-ground documentation, analysis, and reporting).