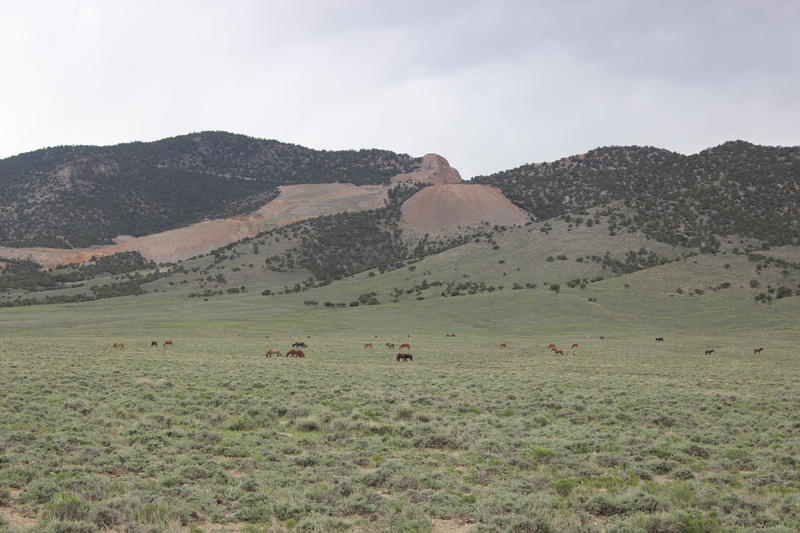 For more information about the draft joint proposal to Congress supported by Return to Freedom, the Humane Society of the United States, ASPCA, and other stakeholders, click here.

As published by KUNR Public Radio

Nevada’s wild horse population has exploded to an all-time high of more than 43,000 horses. That’s 60 percent of all the wild horses roaming the West — and it’s nearly quadruple the 12,800 equids the Bureau of Land Management says that Nevada’s land can sustain. There’s long been controversy over just how to manage wild horses in the West, and some would say the result has been no management at all.

In recent years, the problem has escalated so significantly that often-battling groups have come together to support a stringent proposal to drastically reduce wild horse numbers without killing any animals. Written by the Humane Society, the plan involves gathering large numbers of horses in overpopulated herds and applying large-scale fertility control measures. It’s also supported by the National Cattlemen’s Beef Association and the Society for Range Management.

For many ranchers, a solution can’t come soon enough.

An up-close perspective on the range

Sitting in her 4Runner overlooking her ranch outside Pioche, Kena Gloeckner points to the checkered valley below, where her family grows crested wheat and hay, and they also graze cattle on about a million acres of public land.

“I think Americans, as a whole, see this beautiful picture of the iconic American Mustang galloping off on the horizon with its mane and tail flowing in the breeze, and it’s a beautiful sight,” says Gloeckner.

“People who live here, we understand that that image is very unrealistic.”

Gloeckner’s family has owned this ranch about two hours south of Ely since the 1800s. Gloeckner says she loves horses, but over the past decade, the wild horse population in the “herd management area,” or HMA, where she leases federal land, has ballooned to nearly 2,000. That’s far more than the 200 horses the Bureau of Land Management says that land can sustain. And unlike cattle and sheep, horses graze on the land every day of the year.

Kena Gloeckner took this photo of a watering hole on public lands that she leased outside Pioche last year. She says wild horses have decimated the grazing areas around the watering hole.

“It’s impossible to keep the horses out of these areas that are outside the HMAs,” says Gloeckner, adding that wild horses have broken through all her fences.

She says horses have decimated her crested wheat crop: “because those horses never leave, the plant never has a chance to grow tall and regenerate… because these horses will graze it to the ground.”

Gloeckner says it’s cost her ranch thousands of dollars to supplement their cattle’s feed when wild horses overgraze both her private acres and the public lands she leases.

BLM rules dictate which months ranchers may turn out livestock on public lands and what percentage of the forage the livestock can eat. That means if wild horses have already grazed down the forage before a rancher’s permit season begins, the ranchers cannot release their livestock onto the land.

Ben Noyes is a Nevada Wild Horse & Burro Specialist with the BLM’s Ely District. He says he’s seen significant damage, “especially the spring areas, the riparian areas are really getting hit hard. They’re getting pounded out. A lot of our winter fat sites are getting destroyed.”

Winter fat is also called white sagebrush— and wildlife, livestock and horses all graze it.

Some wild horse advocates have said that the BLM is exaggerating the overpopulation, but Noyes says he’s seen horses starving and thirsting to death, unable to move, all skin and bones.

“And if you haven’t seen horses die, to me, you haven’t seen the real picture. It’s pretty easy to sit at home and think it’s just the Lion King show, but the reality of it is it’s not that way on the range.”

Too many horses for fertility control alone

But figuring out just how to manage the horses and bring populations to a healthy number is another story altogether.

The Wild and Free-Roaming Horses and Burros Act of 1971 allows the BLM a variety of management tools, including fertility control, putting horses up for adoption, gathering and relocating them—and euthanasia.

“That’s a noble thing to say, ‘Hey, we don’t want any of them to go to slaughter.’ Okay, I get that. But you still have to manage them on the resource,” says Amodei. “Adoption is a piece of the puzzle, but it doesn’t solve the problem. The reproduction rates are much more robust than the 2,500 that are adopted a year.”

Amodei says there’s also fertility control— it requires giving the horses two shots of a vaccine to prevent pregnancy for one year. Inoculating horses in the wild is usually done by a person with a dart gun, who must get within 30 yards to be effective.

“But the problem is the vast majority of that population is not by, you know, someplace that’s easily accessible, which means time and money to go find them and treat them,” he explains.

Right now, most of the BLM’s time and money is going toward gathering horses from the range; the technique uses helicopters to herd the horses into a corral. Yet that’s not the most expensive part. Once the horses are removed, they must be cared for.

‘Between a rock and a hard place’

Over 60 percent of the BLM’s wild horse and burro annual budget goes toward paying for wild horses to live out the rest of their lives on a pasture somewhere in Nebraska, says Jason Lutterman with the BLM. But even the expensive horse relocations are no longer making a dent in the population.

“We gathered around 11,500 animals from the range last year and our population still grew by several thousand animals and is 7.25 percent above last year’s population, herd. So you can see sort of the magnitude of the challenge that we’re facing right now.”

Lutterman says the BLM doesn’t have the funds to gather enough horses to bring herd sizes down anywhere close to the appropriate management level. Instead, most gathers are reserved for emergencies such as wildfire or concerns for public safety. Last year in Nevada, only half of the gathers were targeted for population reduction.

Since the wild horse population has sky-rocketed over the past decade, gathering horses has become an emergency Band-Aid, but doesn’t make a real dent as the horses continue to procreate.

“We’ve invested over $11 million since 2015 just trying to develop these other fertility control protocols that could be part of the answer once we get down to the appropriate management level,” says Lutterman.

“That’s why we were already starting to increase our gathers. We’re really focused on trying to get those herds under control, but just knowing that BLM is sort of in between a rock and a hard place, we don’t really have a place to put those animals once we remove them from the land.”

Celeste Carlisle, a biologist with the wild horse advocacy group Return to Freedom, says to address the problem it’s going to take a coordinated plan that uses all the nonlethal tools:

Carlisle says that could include things like gathering horses to apply fertility control and trying new ways to find homes for horses removed from the range.

“But in the long run–and that’s the hard part is the long run is 10, 15 years down the line–then we actually end up saving money.”

The BLM is testing new forms of fertility control that would last longer than one year, and it’s also trying to ramp up adoption programs by creating a new online adoption platform. And the agency is partnering with a TV show in Germany based on the Extreme Mustang Makeover. There’s some interest in Europe in adopting these icons of the Wild West.

But in the meantime, the BLM has its work cut out for it because the wild horse population grows by 20 percent each spring. Next year’s foal crop could add over 8,000 new horses to the Nevada range.