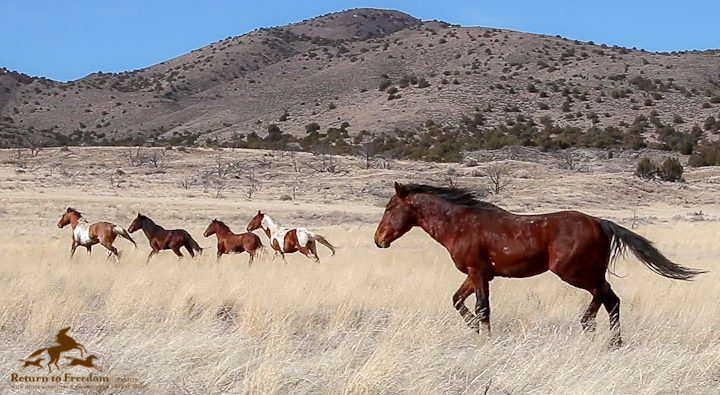 Healthy wild horses are released after being treated with fertility control vaccine following a 2017 roundup at the Cedar Mountain Herd Management Area in Utah. Photo by Steve Paige.

The Fiscal Year 2018 spending proposal released on Wednesday by the House of Representatives and Senate includes good news for America’s horses, both wild and domestic.

The $1.3 trillion spending package maintains long-standing bipartisan language prohibiting the Bureau of Land Management from killing healthy wild horses and burros. It also contains language effectively banning horse slaughter for another fiscal year as Congress has done every year except for one since 2005.

“We’re pleased that Congressional leaders have listened to their constituents, who are as overwhelmingly opposed to the needless killing of horses as they are supportive of protecting wild horses and burros on our public lands,” said Neda DeMayo, founder and president of Return to Freedom Wild Horse Conservation.

“We urge Congress to take the next step, first by requiring that the Bureau of Land Management enact a sustainable long-term plan to protect America’s iconic wild horses and burros on their rightful ranges– and then by providing the investment needed to make it work effectively.”

Congress faces a Friday deadline to pass the legislation package to fund the federal government or face another government shutdown.

Last summer, the House Appropriations Committee passed their FY18 Interior Appropriations bill containing an amendment by Rep. Chris Stewart, R-Utah, that would have enabled BLM to euthanize wild horses and burros in government holding pens to reduce their numbers. Euthanasia is allowed under the Wild and Free-Roaming Horses and Burros of Act of 1971, but Congress has consistently inserted language barring BLM from resorting to shooting healthy wild horses and burros since the late 1990s.

As part of the FY18 House Agriculture Appropriations process, the House Appropriations Committee also voted 27-25 against the so-called horse slaughter defund amendment. In the absence of a permanent ban on horse slaughter, horse- and animal-welfare advocates have since 2005 pushed for the amendment, which prohibits the U.S. Department of Agriculture from hiring horse meat inspectors.

Attempts to reinsert protective language relating to both wild horses and horse slaughter were subsequently rejected by the House Rules Committee on a party line vote.

Fortunately, the Senate Appropriations Committee voted in favor of horse slaughter defund language in its Ag appropriations bill. The full committee did not vote on an Interior bill but included a ban on killing wild horses in its draft. The Senate language on euthanasia and on slaughter subsequently won out when differences between the bills were hashed out in conference.

For advocates, any victory will be short-lived: The administration’s preliminary budget proposal for Fiscal Year 2019 calls not only for again slashing the Wild Horse and Burro Program budget, it would allow BLM to euthanize healthy wild horses and burros.

Wild horse advocates are battling a misinformation campaign from the BLM and others who wish to see mustangs and burros gone from the range. Opponents of free-roaming wild horses and burros on public lands have painted a false picture for Congress of starving horses on a range damaged solely by wild horses with no mention of the number of privately owned livestock on public lands dwarfing that of wild horses.

Critics also continue to contend – falsely – that the use of fertility control vaccines have failed, despite BLM having never spent more than 3.88% of the wild horse program’s budget on safe, proven fertility control vaccines. In its place, the BLM continues an expensive, inhumane system of helicopter roundups and warehousing of wild horses in off-range government corrals and leased pastures.

A 2013 National Academy of Sciences report identified fertility control as an effective tool for managing the wild horse population while blaming BLM’s system of capture and removal for promoting population growth. An economic model published that same year in the peer-reviewed Journal of Zoo and Wildlife Medicine found that the BLM could attain its management goals within 12 years by using fertility control.

In 2007, BLM was very close to achieving their desired population target and still did not implement an effective fertility control program that has proven 91-98% successful in various other programs. In 2016, for example, BLM spent just $340,000 on fertility control compared to $52.49 million on capturing and warehousing horses off the range.

Return to Freedom and other advocates have long called for redirecting money spent on capturing and holding wild horses toward available solutions. These include not only using safe, proven fertility control but revisiting population targets, based on a fair interpretation of multiple-use land management; providing incentives for ranchers who reduce livestock grazing in wild horse Herd Management Areas; increasing range stewardship, including much-needed water source restoration; and relocating horses, if truly necessary.

The 2007 shuttering of the last horse slaughterhouse in the United States has done nothing to keep American horses and burros from foreign killing floors or decrease the risk to human health from eating horse meat.

An average of 127,000 horses — including an unknown number of wild horses and burros — were trucked to their deaths in Mexico and Canada from 2008-2015, according to the U.S. Department of Agriculture. Once beyond our borders and the USDA regulations, horses can face brutal and terrifying deaths in antiquated facilities.

Because American horses are not raised to be eaten, they frequently are given medications banned for human consumption by the USDA and European Union.

No U.S. regulations require the sharing of information about substances previously ingested by a horse up for auction. There, horses are often purchased by “kill” buyers with the intent on sending them to slaughter. More than 90 percent of these exported horses are in “good” condition, according to the USDA.

The bipartisan SAFE Act (HR 113 / S. 1706), which would permanently ban horse slaughter and the transportation of horses for slaughter, has amassed 209 House cosponsors and 29 Senate cosponsors.