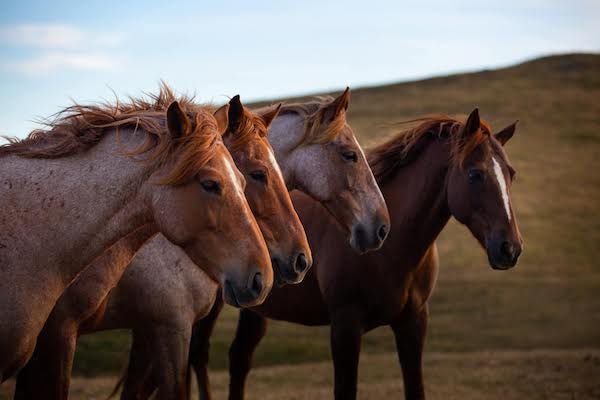 TAKE ACTION: Send a message to your senators and representative urging them to cosponsor legislation to ban horse slaughter!

The John Stringer Rainey Safeguard American Food Exports (SAFE) Act is supported by leading animal welfare groups, including the Animal Welfare Institute, the ASPCA® (The American Society for the Prevention of Cruelty to Animals®), the Humane Society of the United States, the Humane Society Legislative Fund, and Return to Freedom Wild Horse Conservation.

Tens of thousands of American horses are shipped each year to Canada and Mexico to be slaughtered for human consumption—a practice that 80% of American voters oppose. American horses are not raised for food and routinely receive a wide range of medications that are expressly prohibited for use in meat products. Even so, the problem of horses and burros being butchered for human consumption persists because“kill-buyers” can legally purchase horses at auctions or from unsuspecting owners in order to ship them to slaughterhouses abroad.

Horses endure long stressful journeys without food, water, or rest and can experience severe injuries and even death en route to slaughterhouses. During the slaughter process, it can be extremely difficult to accurately stun horses—who react to noise, smells and sounds in a commercial plant with their natural flight response. Improperly stunned horses may even remain conscious during the butchering and dismemberment process. The inherent cruelty of sending horses to slaughter is evident at each stage of their journey and was well documented—even in the presence of government oversight—when slaughterhouses existed in the United States.

Further complicating the issue is that unsuspecting individual who wish to rehome their horses are being duped into selling them into the slaughter pipeline. A recent example involved a veterinary student who deceived owners into giving up their horses by stating that she would find good homes for them but instead profited by selling them for slaughter. As long as no federal law prohibits the sale for human consumption, owners are unable to ensure that any horse they sell will not end up on a truck bound for a slaughterhouse across the border. Every horse, in fact, is one bad sale away from slaughter.

The John Stringer Rainey SAFE Act would amend Title 18 of the U.S. Code to make it illegal for anyone to knowingly transport, purchase, sell, possess, ship or receive any horse with the intent of slaughtering the animal for human consumption. The SAFE Act would also codify penalties, including fines and imprisonment, for individuals who violate the law. The bill—which mirrors legislation that was introduced in a prior session of Congress—will be referred to the Senate Judiciary Committee, of which Sen.Graham is the chair.

The legislation is named for the late John Stringer Rainey of South Carolina. Rainey was a business leader and philanthropist who supported organizations that promote second careers for retired racehorses. He also worked for the passage of legislation to end the slaughter of horses.

“The gruesome practice of slaughtering horses for food has no place in the United States, and it’s well past time for Congress to say once and for all that horsemeat is not what’s for dinner,” said Sen. Menendez. “Horses are routinely treated with drugs that are dangerous for human consumption and do not belong in our nation’s food supply. Our bipartisan legislation will help put an end to the cruel and inhumane slaughter of horses while protecting families from toxic horsemeat and safeguarding the reputation of the U.S. food industry worldwide.”

“We are grateful to Senators Menendez, Graham, Whitehouse, and Collins for their leadership in ending the slaughter of American horses for human consumption by introducing the John Stringer Rainey Safeguard American Food Exports (SAFE) Act,” said Cathy Liss, president of the Animal Welfare Institute. “The problem of tens of thousands of American horses being shipped to slaughter abroad has persisted for far too long, despite overwhelming public opposition to this practice. The food safety and animal welfare concerns associated with the horse slaughter industry are simply too great to ignore. We owe it to these majestic animals to ensure that they do not meet an inhumane death and that the predatory horse slaughter industry is finally stamped out in the United States.”

“Horse industry stakeholders and animal welfare organizations are joining forces on equine welfare solutions by assisting at-risk horses and providing safety net services for owners in need, but those efforts cannot prevent this practice as long as it remains legal. Each year that passes without a ban on horse slaughter in place subjects tens of thousands of American horses to a horrific fate—one that is entirely avoidable,” said Nancy Perry, senior vice president of ASPCA Government Relations. “We are grateful to Senators Menendez, Graham, Whitehouse, and Collins for their leadership in moving the SAFE Act forward to protect horses from this greed-driven cruelty.”

“Horse slaughter is fundamentally cruel. The fear and suffering of the animals, while reason enough to stop this industry, are not the only problems,” said Kitty Block, president and CEO of the Humane Society of the United States, “Since American horses are not raised for human consumption and are given medications that can be dangerous to humans, their meat is not safe for human consumption. We applaud these Senators who have taken a stand with most Americans who view horse slaughter as the true abomination it is.”

“It is time to ban the slaughter of American horses for human consumption. Horses are an iconic American species, in large part because of their amazing contributions to the building of our nation,” said Sara Amundson, president of the Humane Society Legislative Fund. “They deserve better than being shipped overseas to slaughter. We applaud Senators Menendez, Whitehouse, Collins and Graham for helping to protect them from the inhumane practices of slaughter.”

“That more than 80,000 American horses—including an unknown number who once roamed freely on our public lands—are shipped to their deaths in foreign slaughterhouses each year is an unnecessary betrayal of the animals that helped us build our country, continue to serve humanity and inspire people around the world as a symbol of the American spirit,” said Neda DeMayo, president of Return to Freedom Wild Horse Conservation. “RTF applauds Senators Menendez, Graham, Whitehouse and Collins for recognizing the public’s overwhelming opposition to horse slaughter and continuing this bipartisan fight for the good of America’s horses and for human health.”

The groups encourage the public to contact their senators to urge them to cosponsor the SAFE Act and do all they can to secure its swift passage in order to protect America’s horses and overall consumer health from horse slaughter.

About RTF
Founded in 1997, Return to Freedom is a national 501 C3 nonprofit organization dedicated to wild horse preservation through sanctuary, education, advocacy and conservation. RTF also operates the American Wild Horse Sanctuary, home to nearly 500 wild horses and burros, created as a model to explore minimally intrusive management methods that could be implemented on the range as an alternative to roundups. Follow us on Facebook, Twitter and Instagram.

About AWI
The Animal Welfare Institute (AWI) is a nonprofit charitable organization founded in 1951 and dedicated to reducing animal suffering caused by people. AWI engages policymakers, scientists, industry, and the public to achieve better treatment of animals everywhere—in the laboratory, on the farm, in commerce, at home, and in the wild.

About the ASPCA®
Founded in 1866, the ASPCA® (The American Society for the Prevention of Cruelty to Animals®) is the first animal welfare organization in North America and serves as the nation’s leading voice for animals. More than two million supporters strong, the ASPCA’s mission is to provide effective means for the prevention of cruelty to animals throughout the United States. As a 501(c)(3) not-for-profit corporation, the ASPCA is a national leader in the areas of anti-cruelty, community outreach and animal health services.

About The HSUS
The Humane Society of the United States is the most effective animal protection organization, as rated by our peers. For more than 60 years, we have celebrated the protection of all animals and confronted all forms of cruelty. We and our affiliates are the nation’s largest provider of hands-on services for animals, caring for more than 100,000 animals each year, and we prevent cruelty to millions more through our advocacy campaigns. Read about our more than 60 years of transformational change for animals and people.

About HSLF
The Humane Society Legislative Fund is a social welfare organization incorporated under section 501(c)(4) of the Internal Revenue Code and formed in 2004 as a separate lobbying affiliate of The Humane Society of the United States. The HSLF works to pass animal protection laws at the state and federal level, to educate the public about animal protection issues, and to support humane candidates for office.